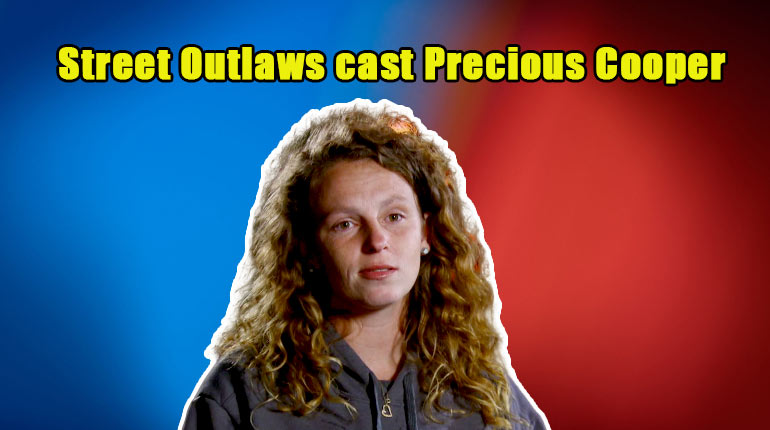 If you googled “Precious Cooper” before finding our article, you might have come across some pretty intimidatingly titled videos of her. It is quite alright if you were intimidated because that is exactly what you should be feeling when learning about one of the best racers from the Discovery hit show ‘Street Outlaws.’

What is Precious Cooper’s net worth? Be patient, we will slowly get there along with her married life and husband but first a little insight on her bio and who she is.

Precious Cooper is a famous racer from the TV show ‘Street Outlaws’ who made her debut to the Memphis Racing scene in 2016. We still remember it as clear as it was yesterday. Precious Cooper was one of the very first women introduced by JJ Da Boss. She was going up against Chuck, who had his mind set on making a grand comeback in his upgraded new car.

She would not only squash Chuck’s plans but also destroy the gender barrier in ‘Street Outlaws’ and street racing in general. It wouldn’t surprise you much if you knew Cooper’s background. She was born in 1989 in Osceola County of Florida. She was always interested in cars, but seeing JJ Da Boss racing at the age of 19 years made her fall in love with the game.

Precious requested JJ Da Boss to train her. Under the wings of one of the greatest street racers of all time, it is no wonder she became such a dominant force and an icon for female racers. It is no wonder JJ Da Boss was so happy to see her win the first race in the video above.

Rumors of Affair with the Married JJ Da Boss

Well, while JJ seems happy to see one of his students achieve so much success under his guidance, people were quick to take it the wrong way. Even following Precious Cooper on social media, you will see that she frequently hangs out with JJ and never forgets to shower him with gratitude.

Many people did not even think twice before spreading rumors that she was married to JJ. Even people who knew that JJ was happily married to wife Tricia Day with 4 children together, started to spread rumors that he was having an extra-marital affair with her.

If only the people who spread these rumors had done a little more research, they would know that JJ Da Boss and Tricia Day both consider Precious a family member. They are technically related, the details as to how we will talk later, but even if they were not, their relationship clearly seems nothing more than just that of a teacher and student.

Is Precious Cooper a stage or a real name? Who is her Sister?

Precious Cooper may sound like a made-up name, but we think that it is her real name. Precious is a common Southern way of addressing people, and her parents are Ricky and Sara Cooper. Many people may not know that Cooper has a sister.

Her sister’s name is Chelsea Day. You may have seen around in every one of Precious Cooper’s race. We are not sure if she is a racer or not, but she gives her sister a hand with her cars and races. If you follow either of the sisters on social media, you can see that they look very similar; they may even be identical twin sisters for all we know.

You may have noticed; her sister’s surname matches that of the ‘Street Outlaws’ star JJ Da Boss, aka Jonathan Day. Chelsea Day just so happens to be married to JJ Da Boss’s son, Joshua Day. You may better know Joshua as Doughboy, who is also a racer in ‘Street Outlaws.’ See what we meant earlier when we said Precious and JJ were practically families.

Anyway, Chelsea and Joshua Day are happily married. They also have two lovely children together; Kam and Nova. With their two sons, their family life couldn’t be any more complete or perfect.

The first time we saw Precious Cooper racing, it was in a car she called ‘Puddle Jumper.’ Before we began even to grasp an idea on what kind of a car it, Precious upgraded in both size and quality. JJ Da Boss gave her his modified 1969 Chevy Pick-up truck, and she owned it like a boss. Even while driving such a large vehicle, she would dare to start the race by doing a wheelie.

While Precious had a notorious win streak with ‘Ole Heavy,’ she seems to have a new car already. Once again, JJ thought it was her time to upgrade, this time to a more stylish red Zip tie Nova. Cooper has shown quite a versatility showing equally excellent performance in her new car as well.

If you have stuck with us till now, then it will be a little too late to emphasize more about Precious Cooper’s racing status. She is called the ‘Queen of the Streets’ because she is ruthless and undisputed when she is behind the wheel.

It is kind of her signature to slide her fingers across her neck. She may even take a less subtle method by literally screaming “Off with their head” as if she was a queen barking order of someone’s execution.

Caption: Precious Cooper, the Queen of the Streets Intro

With a winning record like hers, it is understandable that she must possess quite the net worth from all the money she makes. Unlike most racers too, JJ Da Boss seems to gift her new cars to race, so she saves up a lot of money on that.

Although her net worth is still under review, it has to at least within the $50,000 to $100,000 range, if not more. We will be sure to keep checking and come up with a more accurate estimate of her net worth and salary soon enough.

‘Street Outlaws’ in Discovery is not the only place where you can get news and updated on Precious Cooper. You can also follow her on Facebook and Instagram. If you love cars and racing just as much like her, then you shall have a pretty good experience. She mostly posts about that stuff but also likes to post her pictures with her fans, sister, and fellow racers like Mallory Gulley.