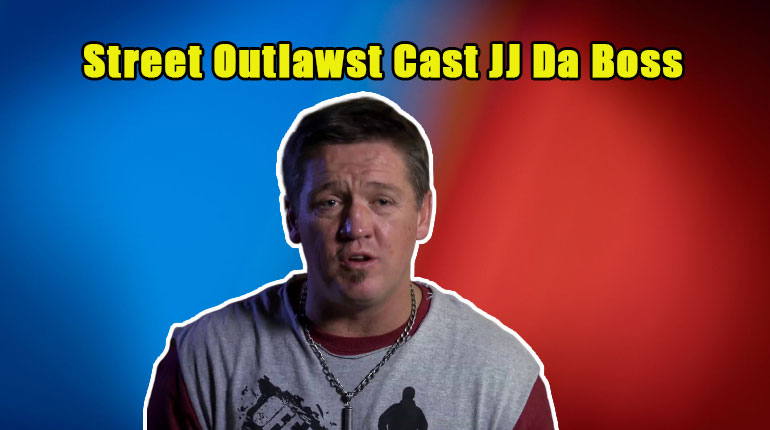 If you are in love with loud-fast cars, then you have definitely watched Discovery’s reality show ‘Street Outlaws.’ Well, how much do you know about the legend street car racer JJ Da Boss?

JJ Da Boss is known to be one of the fastest men on the street and one of the biggest gamblers. He has raced in every street of Memphis and earned quite the reputation as both a racer and gambler.

Here’s what you need to know more about Street Outlaws legend from Memphis, JJ Da Boss.

JJ Da Boss was born on 11 August 1973 in Memphis, the United States, that makes his age 46. However, most of his fans don’t know his real name. JJ Da Boss’s birth name is Jonathan Day.

Jonathan took to Instagram and posted a picture with his daughters and even mentioned their names on his 46th birthday. He was sitting with his four daughters; Whitney, Aubrey, Vada, and Annaline.

He even shared some pictures of his parents on his social media. Back in August 2018, he shared a photo of his parents, kids, and dog on his Instagram. He thanked the Lord for his life, and indeed there can’t be a bigger blessing for a man than to see his kids get to play with his parents.

In January 2019, JJ Da Boss posted a picture of his mom and two kids on Instagram. On the post, he stated, his mother has filled his life with love. He continued, he is blessed to have a mom like her who drives 3 hours to see him, and her grandkids.

From an early age, he has a passion for muscle cars and started driving since his childhood days in his hometown road. Before fame, he got involved in a family business where he fixed old vehicles. Also, he trade, buy and sells old cars.

JJ Da Boss’s first race car was a 1996 Chevy II Nova. Later he modified it with a 402 big block engine out of an old Bob truck. He owns race cars such as Ziptie, Ole Heavy, and Heifer. Currently, he and his wife drive a 1966 Chevy Nova by the name of Heifer.

However, now that he has entrusted his Ziptie to Precious Cooper, he might return to driving the Ole Heavy, which is a 1949 pickup. He sure does love that car enough as you can guess from his Social media, where he often posts its pictures along with the caption ‘don’t bet against Ole Heavy.’

JJ Da Boss started racing from a young age along with his friends in Memphis street. Later he began his own street racing known as “SPIN CITY.”

JJ Da Boss made his TV debut in an episode of Street Outlaws titled “Street Misson” in December 2016. After years of street racing the Memphis Street Outlaws, he came on the television with his own show, “Street Outlaws Memphis.”

JJ led a group of street racers and treated them like a family. Additionally, he is a fast talker who isn’t afraid to bend the rules and take home the money.

JJ Da Boss has an Italian Masstif dog named Mak. Mak is one of the family members of JJ Da boos. He took his dog in every race with him. He has even shared several pictures of it on his social media, including Facebook and Instagram.

In one of Twitter posts, he tweeted the photo of Mak and captioned it, “Mak, the real dog.”

JJ took some bad choices and sentenced to federal prison, where he served for eight years and one month. However, the reason for his conviction is still not disclosed. We are unable to find the information about why he was sentenced to jail. The fact we do know is that he was involved in illegal work in the past.

After releasing from jail, he decided not to go back in that life and started his own business. So he could be a better man and live a better life with his family.

What do you think about how much is JJ’s net worth would be? JJ makes most of his money from his car racing profession. In addition, JJ earns impressive money from the race as well as his show. By best estimate, Jonathan Day’s net worth is not less than $1 million.

JJ Da Boss has his own Merchandise

The 46 years old car racer has his own merch line from which he generates extra paychecks that helps to increase his net worth. He has a merch line named “Memphis Street Racer” where you can buy items like t-shirts, keychain, hats, hoodies, posters, jackets, License Plate, and much more. The price ranges from above $4 to $50.

JJ Da Boss is a Father of Eleven Children

JJ Da Boss has a big family. He is married to wife Tricia Day, who is also known as Midget and one of the Memphis family’s strongest and fastest racers. In the 2018 interview, JJ Da Boss revealed that he and his wife have been together for more than a decade.

He said that his wife Tricia brought happiness in his life and got his right path. The duo has three daughters and a son, little JJ. The couple raised 11 kids together and has five grandchildren. Although the names of his other children are unknown.

He posted a picture of his two daughters in 2018 and wrote the first day of the school of Vada and Aubrey. Both of his daughters wore white sneakers and had a big smile on their faces.