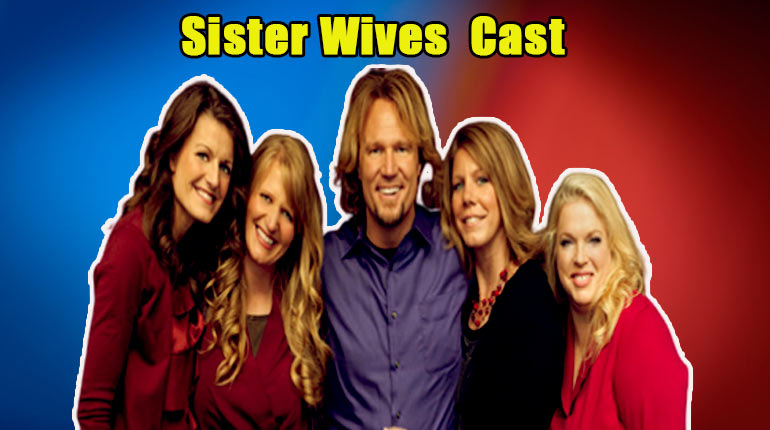 Sister Wives is a popular and fascinating reality TV show broadcasted on TLC. The show premiered on 26 September 2010.The series centered around a polygamist family consisting of Kody Brown, his four wives, and their 18 eighteen.

Here, we are going to talk and explore Sister Wives cast main members Kody Brown and his four lovely spouses, Meri, Janelle, Christine, and Robyn Brown. So, get to ready to know about them through the below paragraphs, which covers their bio and also highlight the show, Sister Wives’ controversial moments.

Kody Winn Brown is a former salesman and TV personality best known for Sister Wives. He was born on January 20, 1969, in the United States of America.

Brown is the son of  Genilie and William Brown. His father was a polygamist and had ten children altogether with three different wives. He was raised in a family. Besides, Kody has not officially disclosed anything about his educational qualifications.

Following in the footsteps of his father, William Brown. Kody, too, decided to make a large family. The patriarch of the Brown family has four wives whose names are Meri, Janelle Schriever, Christine, and Robyn. Through his four wives which he fathered eighteen children.

Kody’s show, Sister Wives chronicle lives of polygamist lifestyle, which was illegal in Utah at the time of the release of the Sister Wives.

On September 8, 2010, an official trailer for the TLC show Sister Wives was aired, whereas Sister Wivespremiered on TLC on September 26, 2010. The premier show has more than 2 million viewers.

Meri Brown is the first wife of Kody Brown. Born on 16 January 1971 in Alameda, California, Meri Brown is a reality TV personality and businesswoman through occupation. She is the daughter of Bonnie Ahlstrom and Wiliam Barber Jr. Her parents practiced Polygamists.

They first met in the late 80s and became engaged in 1989 became and a year later, the two tied their wedding knot in 1990. The couple became the parents of their only child, daughter, Maria Brown, born in 1995.

She has appeared in the show over 50 episodes. Meri got severed her wedding ties and divorced Kody in 2014. The reason for the divorce was done in order for Kody to get married to Robyn legally and adopt her children.

One of the best Sister Wives cast members, Meri Brown’s net worth, is at $400,000, which she earns from her career as a TV personality and her various business ventures. Meri has set up the My Sisterwife’s Closet, with a little aid from her ex-husband, Kody Brown, and sister wives show.

Janelle Brown was born on May 6, 1969, in the United States. She is the daughter of and Robert Brown and Sheryl Usher.

Janelle Brown is a happily married woman. She exchanged wedding vows with her longtime partner, Kody Brown, on 20th January 1993. The pair met each other in the early 90s.

Janelle’s lovely daughter Madison got married to Caleb Bush in the summer of 2016 and has a son, Alex Bush. Similarly, her eldest son Logan officially announced that he was engaged to Michelle Petty on 15th September 2017.

Before her marriage with Kody Brown, she was previously married to Adam Barber in 1988. However, their wedding bliss lasted only for a short as they divorced in 1990.

Nonetheless, Kody Brown’s wife, Janelle Brown’s net worth is in the region of $400,000.

Christine Brown is an American TV personality and real estate agent famous for being the third wife of Sister Wives’s star, Kody Brown.

She was born on 18 April 1972 in Taylorsville, Utah, to Ruthann LeBaron and Rex Allred. Her family follows polygamy, just like Kody’s first wife, Meri Brown. Christine came from a wealthy family and completed her high school education from Taylorsville High School in 1990. Later, she received her degree from Salt Lake Community College, West Valley, Utah.

Moving on towards her married life, Christine married Kody Brown on 25 March 1994 after dating for several years in the 90s She is happy to be one of Kody’s three wives. The couple has six children together, daughters, Mykelti Ann, Gwendolyn, Yasbel Paige, Aspyn and Trucely Grace and only son who goes by the name, Paedon.

Robyn Brown is an American reality TV star known for being the fourth wife of Kody, the leading members of Sister Wives cast.

She was born on 9 October 1978 in the United States of America. Robyn’s parents followed the Mormon faith and are the daughter of her father’s second wife. The name of her father and mother is still under review.

Robyn married her second husband, Kody Winn Brown, in 2010. At the time, Kody was married to his first wife, Meri Brown. Then in 2014, he decided to legally divorce Meri so that Kody could legally Adopt Robyn’s three children.

Her children, son David Preston and daughters, Aurora Alice, and Breanna Rose, were born out with her wedlock with first husband, David Jessop. Robyn divorced with his first spouse, David Jessop, in 2007. Robyn claimed that the reasons for the divorce were the result of abuse.

While Star Wives cast, members have gone to earn name and fame in the TV entertainment business. However, the show has seen it’s a fair share of controversy.

When the show premiered in 2010, the Brown family became the subject of a police investigation over whether its members violated Utah’s bigamy laws, which have strict rules that cohabitating with another person if one person is already married is highly punished.

Following this scandal, the Brown family moved to Nevada. However, the investigation related to his wives was dissolved in 2012, but their legal battle continues against Utah. Concerning their case, Brown’s plaintiff asked US Supreme Court to hear the case in September 2016.

But, in January 2017, the court decided not to hear Brown’s appeal, and the case was ultimately closed. As per Page Six, they stated that the justices left in place a law court ruling saying that Kody and his four wives can’t sue the law just because they were not booked under it.

Similarly, Meri Brown surprised Star Wives fans in October 2015 by revealing she was once catfished online by a woman who was pretending to be a man. Following Meri’s catfish scandal, the Browns were forced out of their worship center, known as Apostolic United Brethren group.

As per several sources, to Radar Online, the controversy was deemed by the church as being too public, so the people of the community told the Brown family to get lost.

Since being rejected by the church, Browns have reported that they have practiced their faith only in their homes and among themselves.

Also, rumors were circling that to keep good TV ratings, Kody speculated to add a fifth wife to this show. However, nothing has been revealed thus far about Kody’s rumored fifth wife.

Sister Wives in season 12 and 13 had its premiere date in January of 2017 and 2018 respectively. So it seems to have caught up to a tradition here as it’s the newest season 14 will also premiere on January 5, 2020. Yes, Sister Wives has indeed been renewed and not canceled despite all the controversies. Here is a look at the new season trailer of Sister Wives to give you an idea about what you will get to see this new season.