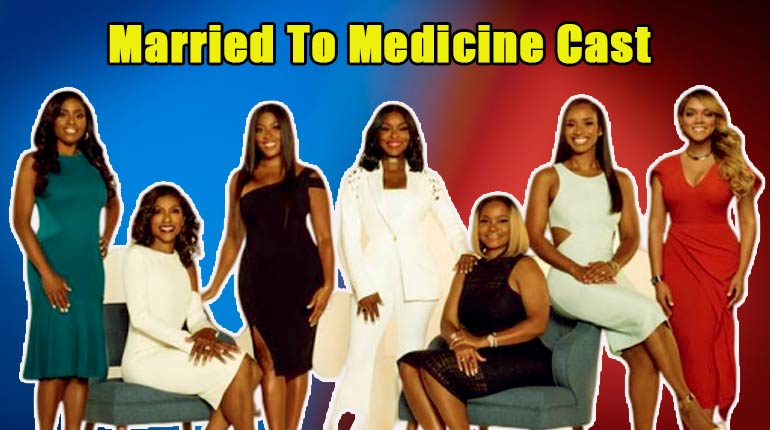 American reality show “Married to Medicine” premiered on Bravo on March 24, 2013, created by Mariah Huq. The Bravo’s series focuses on the lives of women in the Atlanta medical community, with four of are doctors themselves while the others are doctors’ wives. Additionally, the show is all about how the wives balance their profession, social circles, and families.

How much is Married to Medicine cast’s salaries and net worth from the show? To find out, read on.

Dr. Jacqueline Walters is known as Dr. Jackie Walters, who is the main cast of the show. Dr. Jackie is an obstetrician-gynecologist, health expert, and philanthropist. In July 2019, she celebrated her 56th birthday with her castmates and even shared some shots on her Instagram.

Dr. Jackie earned her medical degree from the University of Mississippi School of Medicine. Then Jackie completed her residency in Obstetrics and Gynecology from the Medical Center of Central Georgia and Mercer University. Dr. Jackie’s net worth is estimated to be around $3 million. Reported, she makes a salary of $200,000 per month. Moreover, Dr. Jackie is a breast cancer survivor. Also, she is the founder of the 50 Shades of Pink Foundation that aimed to support breast cancer patients.

Further, Dr. Jackie is an ambassador of the ME Period and also featured on several cover magazines such as Essence, Glamour, PEOPLE, and HLN.

Besides, she has authored a book titled “The Queen V” that released in late 2019. Currently, Dr. Jacqueline Walters is residing in Atlanta with her husband, Curtis Berry, a former pro basketball player, and kids.

Dr. Simone is one of the original cast members of Married to Medicine. She has been on the show since the beginning as the main cast. Dr. Simone is an obstetrician-gynecologist who has her own Atlanta practice, North Perimeter OBFYN. She was born on 23rd February 1967 in Nashville, which makes her age 52.

Dr. Simone graduated with a degree in biology from Spelman College and gained a doctorate in medicine from East Tennessee State University. Then she completed her residency at Boston Medical Center/Boston University.

Dr. Simone announced her separation from her husband, Dr. Cecil Whitmore, after 21 years of marriage in the season five reunion. They have two sons named Miles and Michael. According to Bravo, the couple lived separated in two different homes for eight now. The good news is, Dr. Simone moved back to her husband.

Dr. Simone Whitmore has accumulated a net worth of $3.5 million. As per sources, she earns an average salary of $286,000 per year. Additionally, she is self-employed and probably makes a bit more than Medscape.

British-born model and Tv personality, Kari Wells is famous for being one of the cast members of Married to Medicine. Kari is married to orthopedic surgeon Duncan Wells who runs Atlas Othropedics in Woodstock, Georgia. She worked as CFO at her husband’s orthopedic practice. Kari is a mother of two children; Alexa and Bryson.

Kari joined the cast of Married to Medicine in season first and made a guest appearance in 2, 3, 4, 5, and 7. It seems this reality star earned a pretty good salary from the show, but it hasn’t been revealed yet. Kari Wells’s net worth is estimated to be $8 million.

In addition to her various commitments, Wells is involved politically and socially in Atlanta. Also, she and her husband are heavily engaged in many charitable organizations such as Thriving Children Atlanta and Doctore Without Borders.

Toya Bush-Harris is also one of the original cast members of Married to Medicine. She has appeared on all of the seasons, and even her husband, Dr. Eugene Harris III, joined her as a recurring cast member until season 7.

Toya Bush was born on April 15, 1976, in Detroit, Michigan, making her age 43. Toya is married to Dr. Eugene Harris III, and they share two sons named Ashton and Avery. Moreover, she raised her younger sister when she has ten years.

As of now, Toya Bush-Harris has a net worth of $2 million. On the other hand, her husband earns an average salary of $395,000 a year. The couple paid taxes of $170,000 debt to the IRS. Also, the two worked hard in season four and five to stay on a budget working more hours than ever before. Moreover, she has published her first children’s book titled ‘SleepyHead Please Go To Bed.’

Married to Medicine star Quad Webb-Lunceford is recognized for her marital tips. She is also a TV personality, talk-show host, fashion icon, and philanthropist. Additionally, Quad is popularly known as a Black Barbie.

Quab Webb was born in Memphis, Tennessee, on 13 May 1980, and now, her age is 39. Webb belongs to a simple family and struggles a lot because of her inadequate finances. Before appearing on the television, she worked as a medical sales representative for several years.

Quad Webb-Lunceford changed to her name to Quad Webb after she filed for divorce from her husband, Dr. Gregory Lunceford, a psychiatrist, in May 1, 2018. The divorce became finalized in the same year in September.

Sources reported that Quad Webb’s estimated net worth is $1.5 million. Aside from TV personality, Quad Webb is an entrepreneur and has summoned an impressive wealth from other ventures. She owns Picture Perfect Pup, a line of ‘canine couture.’ Moreover, the reality star loves showing off her cooking skills and also published a cookbook titled ‘Cooking with Miss Quad: Live, Laugh, Love and Eat.’

Mariah Huq is an executive producer and official cast of Bravo’s show ‘Married to Medicine.’ Also, she is a blogger and the Chief Operating Officer of the children’s pajama and decor company Jewel and Jem.

Mariah was born on 22 October 1978 in Tennessee. She enrolled at the University of Tennessee from where Huq double majored in business and communications. Mariah landed a job as a TV host at a local Tennessee news station and also produced daily news stories.

Mariah’s early days as a television host and news producer at a local Tennessee news station, She knew that to tell a story effectively, it needs to be sold to the targeted audience. Mariah Huq as a creator and executive producer behind “Married to Medicine,” the proof is certainly in the pudding.

The reality star married Dr. Aydin Huq, a native of Bangladesh. The couple has two kids named Lauren and Ethan.
They launched a brand of doctor called Cinnamon Girl Diet & Nutrition. Mariah Huq earns an average salary of $210,568 a year. As of now, Mariah’s net worth is said to be approximately $4 million. On the other side, her husband, Dr. Aydin Huq, is likely earning close to $400,000 a year.

Multi-faceted, Dr. Heavenly Kimes grabbed the massive attention of the public after her appearance on Bravo’s reality show, “Married to Medicine.” By profession, she is a dentist and has been working in this filed for more than 17 years. Also, she is the CEO of her won practice in Metro Atlanta.

Heavenly Kimes was born on 17 November 1970, in Miami, Florida, making her age 49. She earned her bachelor’s degree in Biology, Chemistry, and Military Science. After that, Kimes graduated on a Doctorate of Dental Surgery from Meharry Medical College in Nashville, Tennessee.

During the season first, of Married to Medicine, she appeared as a guest. Then she returned on the show as the main cast until season 7. According to Payscale, Cosmetic dentists make an average salary of $160,000 a year. Dr. Heavenly’s accumulated a hefty worth from various sources as a dentist, businesswoman, and TV personality. Kimes’ net worth is $4 million.
Dr. Heavenly Kimes exchanged the vows of her fellow doctor, Dr. Damon Kimes. Dr. Damon and Dr. Heavenly have been married for more than two decades and parents of three children; Damon Jr., Zachary, and Alaura.

Married to Medicine cast Lisa Nicole Cloud is a woman of passion, purpose, and vision. The Bravo TV personality worked so hard to build her empire. Lisa Cole came to limelight after joining the reality show ‘Married to Medicine’ as the main cast along with her husband in season 2 until season 4.

Lisa is originally from Baltimore, Maryland, born on October 15, 1973. She never shared much info about her early life and her parents. Cloud attended Emory University in Atlanta and graduated with a degree in Psychology.

The reality TV star tied the knot to Dr. Darren Naugles, and together, they have two children; D.J and Amira Faith. Lisa spent several years as a sales representative in the pharmaceutical industry. She earned the nicknames as “Ms. Millionaire Maker” for her accomplishments in the development of MLM millionaires due to her mentoring and coaching throughout her career. Lisa Nicole Cloud’s net worth is $8 million.

Dr. Contessa Metcalfe is the newest cast member of the Married to Medicine. Dr. Contessa is a flight surgeon and won a medical concierge service, Acute Face MD.

Born in Kansas City, Mo, on June 4, 1976, Contessa Metcalfe is 43 years old. She was a cheerleader in high school and was a student at Xavier University, where she did her undergraduate degree and then went to St. Louis University.

It is no secret to fans that Dr. Contessa has been married to her husband, Dr. Walter, since 2005. The fact that they didn’t live together until their marriage. Her husband is a family medicine physician. Metcalfe and Walter have three kids; Laure, Landon, and Laila.

Dr. Contessa makes a good fortune on her appearance on the show. However, the exact figure for the salary is still under the radar. Dr. Contessa Metcalfe’s net worth is believed to be around $200,000.

Buffie Purselle joined the cast as Dr. Simone’s friend on Married to Medicine in season 7. Married to Medicine cast Buffie is a tax and personal finance professional with more than twenty years of experience. Buffie became public eyes after she appeared on Bravo’s show. Additionally, she is passionate about helping women channel their inner fruGAL.’

Furthermore, Buffie is married to Dr. David Purselle, who is an Atlanta psychiatrist. However, the net worth and salary of Purselle are under the radar.