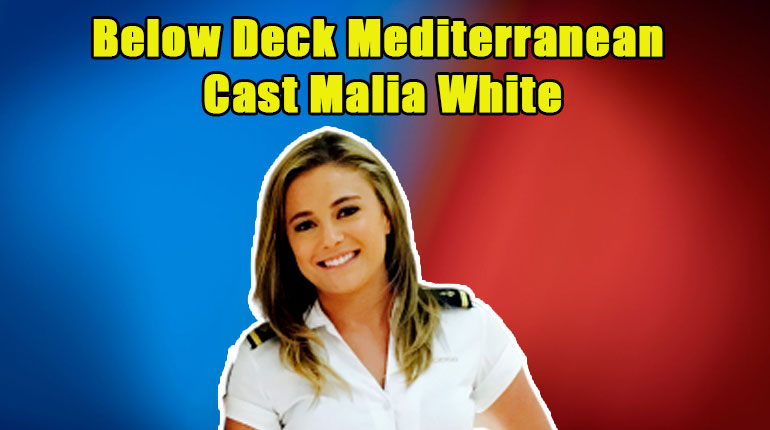 Call us a hopeless romantic, but we still believe that there is a “one” for everybody. You can disagree with us, but if you have a hard time deciding between two partners, neither are the right for you. You may think Malia White from Below Deck Mediterranean is an excellent example to prove us wrong, but then you would be wrong.

It is not your fault as you may have easily lost tabs of Malia White as she never did return to Below Deck Mediterranean after one season. However, with all the fun she bought to the series, especially with the love triangle she had going on was enticing to see on who will be her boyfriend.

Even after her series, we have kept tabs on Malia White’s dating life as well as her career. To learn all about Malia White’s net worth and bio, take a look below with info on her boyfriend. Who is she dating?

Caption: Malia White and Adam Glick talk about their relationship

So, she had a dilemma that would end up with her choosing Wesley Walton in the end. It was a logical choice considering how Adam wanted somewhat of a causal relationship, but Wesley looked like he was serious and was ready to give full commitment to his girlfriend, Malia White.

Malia White and her boyfriend, Wesley Walton, did look like they would make it. Even when no one was looking, they were dating after the end of Below Deck Mediterranean season 2. The chief stew and their co-star, Hannah Ferrier, even confirmed it as back as 2018 that the two were still dating.

All that love triangle dilemma and drama was for nothing; however, as it turns out that they are not dating anymore. We do not know when it happened, but Malia is still enjoying her dating life, it just so happens to be with a new man. Are you curious to learn who her new boyfriend is?

Malia White did not catch a fish from a separate pond as she is currently dating a boyfriend, Tom Checketts, who is also in the yachting business. He is a yacht chef who loves traveling and adventure like his girlfriend. They met in October 2018 and started dating soon after. They celebrated their one-year meeting in October 2019 with a romantic walk in the beach.

They seem to be enjoying their time like a boyfriend and girlfriend. They have been traveling from place to place and giving us a significant couple of goals. Malia even answered one of her followers on Instagram that her dating is fluent only to a partner with the same profession as their jobs are demanding.

In another Instagram post, she answered a follower about her ex-boyfriend, Walton. She said that he was a good guy, too, but Tom was a “keeper.” We wish that Tom is a keeper, and they continue dating for a long, long time.

Malia White’s net worth was a little hard to estimate but not wholly impossible. Despite Malia’s concise career in reality TV of only one season, season 2 of Below Deck Mediterranean to be exact, it was still enough to get her celebrity status. It was enough to get you here to read this article.

Malia White’s net worth from that alone should be impressive, but Malia has gone on to achieve greater things after she ran in Below Deck. Even in the show, we saw her being promoted as the lead deckhand. Since then, she has also become a 1st Engineer, a feat it took her a one challenging year to accomplish. Now, she can proudly wear 3-stripes in her uniform.

Her hunger for success did not end there. She also got her license to become a scuba-diving instructor. She also has her certifications as a Captain to drive any yachts or other water vessels under 200 tons from the coast guard.

Malia White was born on July 20, 1990, in Lauderdale, Florida. She has two sibling brothers, and one of them was in the military. We do not know any more about her bio or early life, and that includes the info on her parents and early life. We do know that her father also used t work in a boatyard. So, she grew up around boats and the seas, and it was only natural for her to pursue a career in the waters.

It is not surprising that Malia White lives in Hawaii as it fits her adventurous personality. She loves the color black and honestly, which beautiful woman won’t?

Many may think that Malia White is gay as she did have a very physical encounter with co-star and friend Hannah Ferrier. However, she is neither a lesbian nor a bi-sexual. If anything, it was her bi-curious moment, which was just an act that the two friends put together to get a reaction out of Bobby Giancola, who found it disgusting.