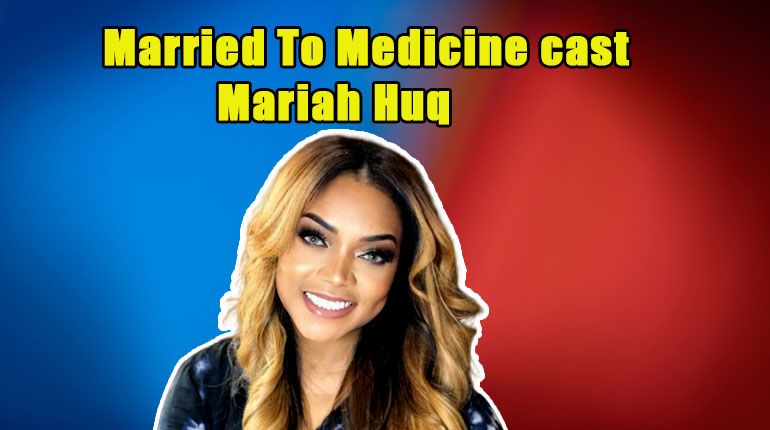 Regardless of what many people may think, reality shows require a certain level of creativity and persistence to create and produce. So, who better to look at an example then a creator, producer, and star of one of the biggest reality shows out there today, ‘Married to Medicine.’

Yes, we are talking about the multi-talented and beautiful Mariah Huq. Did she get plastic surgery because she sure looks unrecognizable? Find out along with her net worth, married life, and more in 9 facts about her.

If you haven’t noticed, the Huqs has built quite a lifestyle for themselves. Mariah Huq is one of the creators and executive producers behind the acclaimed reality series ‘Married to Medicine.’ The fame she receives as a cast of the show does not hurt her income as well. She must be getting triple the salary for her work, which understandably results in her stupendous net worth of around $4 million.

Not to mention, Mariah is married to a respected Doctor, Aydin Huq. She also has a bunch of businesses that we know of. Therefore, her net worth will only grow further from this point in her career.

Happily Married and with Two Kids

Mariah Huq is one of the very few women in her career who can openly boast about her stable marriage. She is married to Dr. Aydin Huq, with whom she shares two lovely children; daughter Lauren Taylor and son Ethan Tyler.

Lauren is proving to be her mother’s daughter and growing up to be even more beautiful every day. Mariah often posts her daughters’ photos and videos on social media like the one below of her Lauren getting a driver’s learning permit. But we think she won’t have to share her daughter’s posts anymore.

Lauren now has her own Instagram account, which already has 1,165 followers. She is also in her school’s Varsity Cheerleading team while also being a straight-A student with a 4.0 GPA.

Her son Ethan Tyler is not holding anything back too. On top of being an honor student, he is also currently studying in the “Centintinnal Aviation” sector, where he will hopefully be a licensed pilot at the age of 16.

She has confirmed to have had Plastic Surgery

When Mariah Huq appeared at the ‘Married at the Medicine’ reunion, she raised a lot of eyebrows when she came looking thoroughly “unrecognizable.” She looked fabulous, but people thought that such a sudden change of appearance meant she had undergone the knife once again.

Mariah Huq also tends to do heavy Photoshop on her pictures, which may have triggered the reaction on social media. Even we have to agree; her eyes looked a little strange in some shots. Maybe she had a facelift? In the past, Mariah came forward to reveal all the plastic surgeries and other procedures that she has done. It included taking in her nostrils on the side, liposuction around the waist, breast implant, and breast lift.

She was Not Born into Wealth

Mariah Huq may now sport a net worth of $4 million, but she comes from humble beginnings. She was born on June 12, 1976, in a small town of Chattanooga, Tennesse. Today at the age of 43, she may be a famous reality star, but back then, she tried her shot to stardom as the host and anchor of the local news channel.

She has Close Ties with Bangladesh

Most of you may already know that her husband, Dr. Aydin Huq, is from Bangladesh. Mariah is very supportive of her husband’s ethnicity and nationality. She is open to her children to experience their father’s country and culture.

Bangladesh is a developing country that faces problems like Flood, which causes yearly destruction. So, Mariah and Aydin have established a family foundation to practice philanthropic works. They also make round-trips to Bangladesh with their son and daughter to look over their foundation as well as keep their children in contact with their ethnicity. You may even catch Mariah dawning a burka or other traditional Bangladeshi dress, as seen in the picture above.

Twin Babies; Ghost of the Past

Mariah has two children she loves with all her life, but they were not the only ones she was going to give birth to. In 2014, she and her husband were pregnant with twin babies, but due to unspecified reason, she had a miscarriage. We can’t even comprehend to understand how it is to lose a baby you had planned a future for. We hope that Mariah does not have to relive pain like that ever again in her life.

Mariah Huq has one sister by the name of Lake. Not much is known about her sister, but she does co-own a business with Lake. Their business is a bedding and pajama line for children, which goes by the name of ‘Jewel and Jem.’

We hope you find these nine facts about Mariah Huq useful. We have tried to incorporate as much new information in our articles as possible. We will be bringing more articles and updates on Mariah and other casts of ‘Married to Medicine’ very soon, so make sure you stick around.