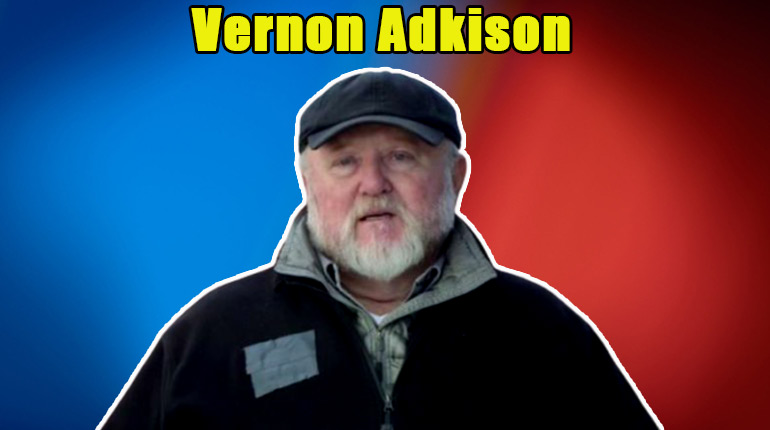 You are always playing with your life when doing something as dangerous as searching for gold in the relentless the Bering Sea and your job. However, for the ‘Bering Sea Gold‘ cast, we are happier to see them do that job because at least then, we will know their whereabouts. Just take Vernon Adkison, for example.

Adkison returned to Bering Sea Gold in season 9 after almost four years. Fans were happy to see him, but moreover, they were in relief that he was alive and well. What really happened? Is Vernan Adkison still alive, or are the death rumors true? Find out along with Vernon Adkison’s net worth and family life. Also, what is the matter with Adkison’s daughter?

No, Vernon Adkison is certainly not dead. As we said, he made his grand return to the Discovery show ‘Bering Sea Gold‘ in the recent season 9, and he couldn’t seem anymore healthier. However, when facing the same question a few months ago, we wouldn’t have been so sure. There were a lot of death rumors going around about Vernon Adkison, and in his profession, you never.

Although we always knew in our hearts that he was alive and well and thus, ran an investigation. Luckily, we found no obituaries online with the name of Vernan Adkison. Furthermore, the reality star is mildly active in his Facebook page posting a Merry Christmas message to all his friends and relatives on December 26, 2019. So, we were pretty sure, but his return to the show just makes it concrete.

Vernon Adkison is not your average gold miner. He’s as unique on his job as his personality. Adkison has an attitude of giving 110% of his attention and effort to his work and expects the same from his crew. To always go above and beyond, the 74-year-old is infamous for his impulsive decision of buying or renting new dredges and equipment.

He also does not hesitate to use innovative techniques to get the job done. However, seldom does the significant risks he takes to end up in big rewards. Something or the other goes wrong, leaving Adkison with very little profit. Adkison being an original cast of the show since 2012 from season 1 through 5, has only walked away with big money a few times.

Season 5 marked one of the worst losses of his career, which was so severe that it almost made him bankrupt. It was the main reason; the Bering Sea Gold star took a hiatus from the show. Likewise, Vernon also has one of the biggest fights in the show’s history with a former shipmate, Scott Meisterheim. The pair traded blows and both suffered bruises and cuts, but the matter did not go up to the police or law.

What Happened to Vernon Adkison’s Daughter?

Vernon Adkison has two daughters, the younger of whom is Yvonne Adkison. While both his daughters are his co-stars and co-workers in ‘Bering Sea Gold,’ his elder daughter, Elaine Adkison, has a longer tenure, still continuing her work her. So, what happened to Yvonne Adkison that she had to leave the show?

Well, something truly controversial happened to Yvonne Adkison. She was arrested in December 2014 for possession of around 10 grams of heroin along with packaging materials and $1,000 in cash. Adkison was caught with a male accomplice by the name of Kevin Beamish. After the arrest, Adkison spent a year Hiland Mountain Correctional Center for almost a year before pleading guilty to the court in February 2017.

The plea deal was able to barter her two years of jail time with three years’ probation. However, the court will consider deducting her time from Hiland and also consider putting Yvonne on an electronic monitoring device for the rest of her year instead of jail. This means that she must currently be on her probation.

According to reports, Yvonne Adkison is no longer working for her father as a Deckhand and Dive tender. However, she is supporting herself by running a hair salon in Fairbanks, Alaska.

Yvonne’s sister, Elaine Adkison, on the other hand, has somehow kept herself away from that kind of trouble and, in return, has become a popular cast member of the show. It is not surprising considering how Elaine was hands-on-deck from her first appearance in season 2.

She was captaining Steve Riedel’s Bearing Booty in the beginning, but later in the season became a deckhand for her father at Wild Ranger. In season 2, we also got to see glimpses of her dating life as she was dating then-boyfriend, Flint Collins. Like Elaine, Flint Collins was working for Steve Riedel before he was sacked.

Their dating life would, however, come to an end by season 4. In this season, we saw Elaine dating a new co-star. The name of her new boyfriend was Shem Fogelman, who was a diver working for her father. Both Shem and Elaine took off mid-season after an argument broke out between her and her father. She would return in season 5 as once-again the captain of the dredge. She currently lives with her boyfriend Shem, welcoming a baby daughter in 2015.

Vernon Adkison has been married thrice in his life. His first wife was Marcy Brocato, and their marriage dates back to 1981. Their marriage was so long ago that there is no further information about it. They obviously did not work out and divorced as he later remarried his second wife, Elisia D Barlo, in early 1989.

Both his daughters are a product of his second marriage, His older daughter Elaine Adkison was born in August 1990 and his younger daughter, Yvonne Adkison was born exactly around two years later in August 1992. So they are 29 years and 27 years old and turning 30 and 28 years old as of 2020 respectively. Despite a good run, his second marriage also came to an end in a divorce.

His ex-wife, Elisia, has remarried and still lives in Homer, Alaska, as Elisia Thompson from her new husband. Similarly, Vernon also is in a new marriage with his third wife, Arlene Adkison. They married on September 26, 2003, and have been going pretty strong so far. They currently live together, and Arlene also momentarily was working with Vernon as a part of her husband’s crew.

Vernon Adkison is the captain and owner of the dredge, Wild Buffalo. He also owns a twin-turbo 65-foot Catamaran gold ship by the same name. Through his already expensive assets, he collects even more revenue in the form of gold worth millions of dollars. Yes, sometimes he loses money with investments that are not worth it. However, he is still able to maintain a massive net worth.

Vernon Adkison’s net worth as of 2020 is $2 million. He collects such a net worth from his annual salary, which is approximately $500,000.

Vernon Adkison was born on June 4, 1946. He was born in Alaska, USA. He is a Laney College graduate in Oakland as well as an alum of the University of South Carolina. American and Caucasian ethnicity, there is no other information about Vernon Adkison’s early life and bio.