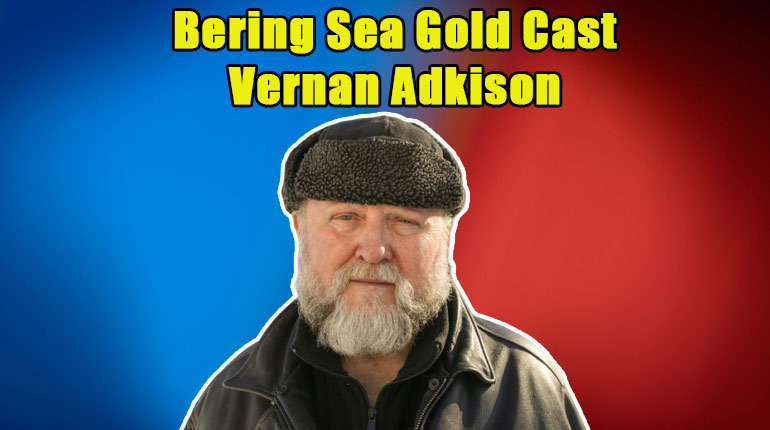 You can separate a piece of meat from a tiger, but you can’t take fame out of a celebrity. If a famous person one day decides to leave all the reputation behind, then it wouldn’t end there. The media will keep writing stories of what they are doing now. Sometimes, for riling people up, even write false rumors, the most malicious one being death rumors.

Well, people went too far this time, targeting our favorite Bering Sea Gold cast member Vernon Adkison. They took the chance of targeting Adkison’s absence from Bering Sea Gold and other public platforms to spread make-believe rumors of his death, but we are here to lay them to rest once and for all.

Along with learning if Vernon Adkison is alive or dead, also check out Adkison’s net worth, married life, and daughters below.

Is Vernon Adkison Dead or Alive?

People who work in dangerous professions are often subject to worries by their fans just as much as their friends and families. Things can turn so quickly grim for people like Vernon Adkison. After all, his work is that of a gold miner who carries their operation out on different parts of the unforgiving Bering Sea.

We all remember the figurative heart attack we had when Sig Hansen in the sister Discovery show, ‘Deadliest Catch,’ had a real heart attack on camera. Such a person like Vernon Adkison can’t leave the public eye without raising a few brows. Some even went as far as to estimate his absence to be because of his death.

Vernon Adkison is very much alive. The reason for his hiatus from the show could be some off-time after a terrible season 10. If we are sincere, Adkison has never really had a great run in his overall time in Bering Sea Gold. Despite his vast collection of dredges, cutting-edge technology at hand, and new creative approaches, by some rotten luck ends up costing him more than his time and money investments.

However, while the death rumors became prevalent before BeringSea Gold season 11 began, they seem to have not subsided even after Vernon Adkison returned in the season.

Moreover, Adkison was also lowly active in his Facebook page wishing his fans, Merry Christmas in December 2019. Furthermore, we also know that he will be returning to season 12 as well. So, the people who had a part in spreading his death rumors better get ready to see just how alive he is.

Vernon Adkison is the Captain of the Wild Rangers, a ship along with several others that are part of the Discovery hit show ‘Bering Sea Gold.’ They are sea gold miners who navigate the dangerous waters of the Bering Sea. They excavate in dredges that have high gold deposits and compete among vessels to see who can garner the most profit each season.

In the show, despite his failures, we have seen Vernon Adkison excavate gold worth hundreds of thousands of dollars. He already has a second boat, Bering Booty, that once his deckhand, Elaine Adkison, who is also his daughter. Then, there is also a considerable salary he makes as a national reality TV star.

His annual salary from the show is an estimate of nearly $500,000 with a salary like that his net worth must be a massive one. Vernon Adkison’s net worth as of 2020 is approximately $2 million.

Vernon Adksions is not someone who you would see goes on and on about his married life. We would certainly be able to know more about his marriage, just like you, especially after knowing his lovely wife, Marcy Brocato. All we know is that they married when Vernon was in his 30s, and he will be turning 73 years of age this year.

So, they have been married for a long time. The living-breathing proofs of their marriage are their two lovely daughters. You already know well about Vernon Adkison’s elder daughter, Elaine Adkison. She is a co-star to her father in Bering Sea Gold.

After years of serving under her father in the Wild Rangers, as his deckhand, she now is the Captain of her own boat, the Bering Booty which is also belonging to her father.

In the show, she was dating ex-boyfriend Flint Collins who was a diver in her father’s boat. You can catch a glimpse of their now non-existent dating life in the video below

However, not all people remember Vernon Adkison’s younger daughter, Yvonne Adkison. Yvonne Adkison also had an appearance in season 4 of Bering Sea Gold working in her father’s vessel; however, it seems that the younger Adkison daughter has run into some troubles with the law.

Why was Vernon Adkison’s daughter, Yvonne Adkison, in jail?

Vernon Adkison’s daughter, Yvonne Adkison, was arrested in December 2014 for possession and distribution of drugs. After police raided her residence, they found heroin, which is a categorically a 1 A felony drug. Along with the drugs were some cash and airline tickets. Yvonne was charged with two counts of felony for possession and distribution, for which she will have to serve two years jail time along with three years in probation.

Adkison had initially plead not guilty at moments right after the arrest but changed it to guilty in her 2017 hearing that was administering her final sentence. So, while possession and distribution of heroin are both Class A felony, it was amended to Class B and C felonies, respectively. She will only need to serve around one year as the other one she had already spent in a Correctional Center.

Yvonne’s friend and partner in crime, Kevin Beamish, did not fall so lucky. He was facing seven counts of felony, including the manufacture of the substance. No wonder, Vernon Adkison’s daughter did not return to the show as she was either till serving in jail or probation while we saw her on season 4.

The Word is that Yvonne, who will be turning 28 years old in 2020, is currently working as a hairstylist under court and probation rules. She also has to wear an electronic tracking device, aka an ankle monitor.

Vernon Adkison was born in 1947 and celebrated his birthday every 4th of June. Adkison is an Alaskan native, so it is no wonder how he found a career in gold mining at the Bering Sea. Most of Vernon Adkison’s bio, including his educational background, remains incomplete. Still, we have information that he was a student at both Laney College in Oakland, California, as well as the University of South Carolina.