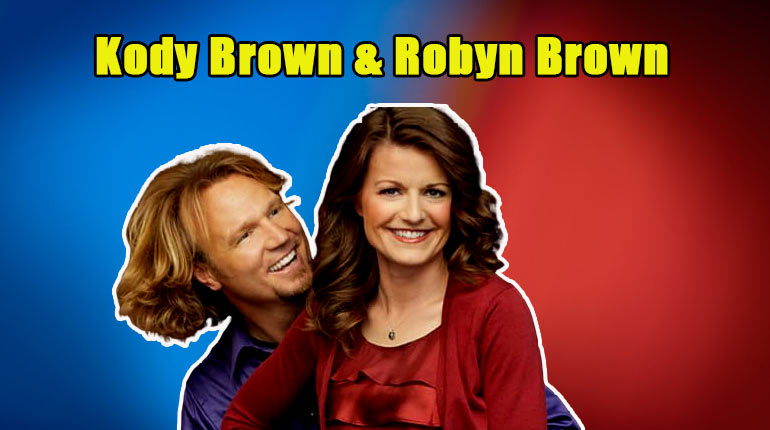 Experts say fighting in a relationship is imminent. Some couples may fight a little and others a lot, but all healthy ones do at one point in time or another. We would have begged to differ this a few months ago as we did know a couple like that and they are not exactly your A-list actors but still one of our favorite stars Kody Brown and his fourth wife, Robyn Brown.

If anyone who is not a super-fan of ‘Sister Wives‘ stumbled upon this article, yes, we said the fourth wife. Kody Brown leads a polygamist family with four wives. It was evident in the past that Robyn was Kody’s favorite wife, perhaps because she was his newest and youngest wife despite both Kody and Robyn’s denial.

Why were they the perfect couple only months ago? To find that out, you will have to go through our entire article on their recent fight. Did the first fight among the couple result in a divorce? Find out along with their complete married history, children, and net worth.

Kody and Robyn were not the perfect couples, but we never saw them in a proper fight. Kody has had disagreements with all his other three wives in the past, but it seems though there is a first time for everything. In the current season 14 of ‘Sister Wives,’ the husband and wife face a problem with their housing.

Their current homeowner has given them 60 days to move out of their house. Kody has taken this as a sign from the god himself to buy their own house. His wife, on the other hand, thinks it is better to look for rental homes so they can save money on their already low-finances. She believes it is necessary if they want to build a permanent house for the whole family later on.

This is where they arrive in the crossroads, and we possibly got to observe the first fight between the spouses. As they explain their dilemma to their kids as well as the differing opinion of both their parents, things start heating up again. When Robyn questions Kody’s gut feeling or god’ will for him, Kody just snaps saying,

“I’m close to that point where I will dissolve the partnership and I will go buy a house without her.”

If that does not sound like a warning for a divorce, we don’t know what does. Don’t you think it was a little too rash to blurt out something so big at just a slight provocation? Not to worry, though, as we don’t believe, so Kody Brown plans to divorce one of his favorite wives just so easily.

It looks like Kody Brown’s threat worked as the husband and wife now are owners of a five-bedroom and four-bathroom $890,000 house, which was initially in the market for over $935k. Robyn may have forgiven but barely forgotten about Kody’s attitude and actions through this, though. She sees his threat as a betrayal of her trust and family.

She was also not happy with how her husband used their children to convince her by inciting Ariella Brown. It sounds wrong to use one’s children as pawns, even in marital scuffles and fights, especially considering that their daughter Ariella is just a pre-schooler.

Robyn also went on and on about Kody Brown’s betrayal to her sister’s wives in their trip to Chicago to visit Meri Brown’s daughter, Mariah Brown. The fourth wife lets it all out saying,

“I’m just starting to get desperate because I really just don’t want to buy. If we buy a house, then it will delay everything we have planned for the property…I just want to scream every time I think about it.”

However, Robyn could not continue dueling with her husband, especially after the ill effects it was having on their children. Aside from Kody bringing in their toddler daughter, Ariella, their older 17-year-old daughter, Aurora Brown, had panic attacks due to all the fighting between her parents.

As Robyn opened up to her sister wives, they supported her and pointed out the significance of someone like her who never opens up finally sharing. This got many fans thinking that what if it was all just a ploy. In the past, Robyn was often the subject of criticism by the fans as Kody Brown’s pet.

It was apparent that he loved her relatively more among his wives, and they never fought. Furthermore, if you remember correctly, almost all wives were not very supportive of Kody’s plan to move from their past residences in Las Vegas, Nevada, to their current ones in Flagstaff, Arizona.

So, fans assume that it is all staged to represent Robyn as more entertaining that the obedient wife. No wonder, Kody Brown dropped the divorce bomb.

As long as we are talking about fan theories, let’s look at an outlandish but with a few valid points. The argument is that Robyn Brown is pregnant. Is Robyn Brown pregnant? We don’t think so, but this rumor gained quite the traction recently, let’s address it.

This rumor also is related to Robyn and Kody buying their new house. Maybe, they needed the extra room for a nursery for a new baby? We can assure you that it is not true, and while we are on the subject, we should also dismiss some claims from fans that Roby looked like she was hiding her pregnant belly with her clothes.

If not, pregnancy could their son Dayton who wants to go to North Arizona University in Flagstaff be the reason the entire family came to the region. That is also false, and this claim was put to rest by Robyn herself via Twitter. She explained that her son only wanted to go to NAU after coming to Flagstaff, and now her daughter, Aurora, also hopes of going there to stay close to home.

No it didn’t at all. It is ridiculous that people are thinking it did. Dayton decided to go to NAU after we made the final decision to move there. He was lucky enough to have applied in time once he know Flagstaff was possibly on the table.

Dayton decided to live at home during college and Aurora is planning on living at home while she goes to college so we can afford it. So I needed to have enough bedrooms to accommodate that.

She had to make it clear as some pesky people keep bothering her for being the pet-wife as we already went through.

Robyn Brown (Sister Wives actor) was born on October 9, 1978, in Utah, as Robyn Sullivan. Not much is there to know about her early life, so let us just skip to her net worth and marriage history.

Robyn Brown’s net worth is approximately $1 million. Most of her net worth comes from one of two sources. It is either through her career in reality TV through ‘Sister Wives’ or the books she authors. She is a writer of multiple books, the popular ones being ‘Becoming Sister Wives: The Unconventional Marriage’ and ‘The Most Likely Night.’

Robyn Brown was married once before meeting her current husband, Kody Brown. She was married to David Jessop from June 1999 to 2007. They were pregnant with their son David Preston aka Dayton, before their wedding and had him on January 16, 2000. They then had two daughters together, Aurora Alice and Breanna Rose, born on June 4, 2002, and October 7, 2005, respectively.

It was David who filed for the divorce in 2007, but later, Robyn came out to say that she was the one who wanted it because he was abusing her. She met Kody in 2009, and they were spiritually married around a year later on May 22, 2010. They had their honeymoon on San Diego and have two children of their own, a son, Solomon Cody, and a daughter Arielle Mae.