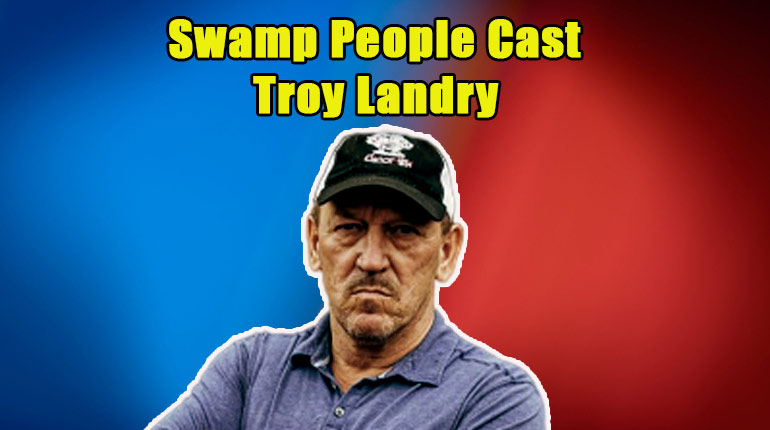 How often do you see a massive alligator in the swamps? And, have you ever wondered how you would react? Well, most people would just flee the scenes as their first reaction, while some fearsome people would rather face the beast than run behind their backs.

Troy Landry is one of these brave souls who is a fierce alligator hunter in the History Channel’s Swamp People. He does not tend to do this for fun, but he has the responsibility to pay the bills.

From his exploration of wildlife to his outstanding career as a television personality, here are some fascinating things about Troy’s married life and wife. We will also talk about his children, including son’s death rumors. Also, find out about his net worth, wiki, and many more.

Who is Troy Landry? Family and Early Life Bio

Troy Landry was born on June 9, 1961. He grew up in Pierre Part, Louisiana. As of his bio, Troy’s zodiac sign is Gemini. He was born to Duffy Landry (father) and Myrtle Landry (mother). He grew up alongside his brother, Bubba Landry.

As the family belongs to a generation of alligator hunters, trappers, shrimpers, and lumberjacks, Troy and his brother Bubba grew up to learn the hunting skill from an early age. The two brothers had the responsibility to carry on the family trait, which is why it’s only natural for Troy to have continued his family business.

Now, it’s been over five decades since he became an alligator hunter. He is a true legend in this business, so the fans can only admire his precision for continuing the line for future generations as well.

Troy Landry from Swamp People and His Career

We are familiar with the fact that the gator hunting season only lasts for a total of 30 days in the Atchafalaya River basin. It might look a little less, but it’s enough for Troy and his family to thrive in their business.

Besides his profession as a professional hunter, Troy also harvests craw-fish and distributes it in the market. Thanks to his deadly gator hunter skills and experience, he is known as “King of the Swamp.”

When it comes to the swamps, he knows everything from east to west zone, so the entire alligator season is like 60 days rather than just 30 for Troy. In 2010, Landry and his family were selected for a new television show named Swamp People. The show is all about featuring the ways of these hunting families in the swamps of Louisiana.

The first season premiered on August 22, 2010, and since then, Troy featured over 150 episodes until it’s 11th season. He is still a favorite among the fans, and his stint this television show led him to prominence.

He features alongside his two sons, Jacob Landry and Chase Landry, as they explore the swamps to hunt the mystical beasts. The show is running in Season 11, and the Landry family is trying to catch as many alligators as possible in 2020.

Troy Landry is Married to Bernita Landry for Decades

Troy Landry married his long-time girlfriend, Bernita Landry, on September 26, 1981. The two have been together for almost forty long years. Talking about Bernita, she went to Petterson High School. She worked as a teller at Petterson State back and also a school teacher as a part of her career.

Now, she is a publicist for the History Channel. The couple lives together in a wooden house that they built together. However, this is not all about their story. This is Bernita’s second marriage while she also had a son, Brandon, from her previous relationship with Gerald Hotard.

Troy Landry is the father of Three

Troy Landry and Bernita have two sons, Jacob and Chase Landry. However, Brandon is a stepson to him. Despite not being related to blood, the hunter has always treated him like their own.

All of his three sons are professional hunters, and they are learning the ways to carry on their family business for the upcoming generations. Troy is often seen in Swamp People with his two sons, while Brandon is not seen that often.

Not so long ago, there were some shocking rumors surrounding the death of Troy’s adoptive son, Brandon. However, the stories have proved to be completely false. Brandon is still alive and doing fine, so it was just some misunderstanding.

There are two reasons behind the shocking death rumor. First, he suddenly disappeared after filming for the show. And secondly, there was a massive misunderstanding regarding a person having the same name and his death. As a matter of fact, the man was also born in the parts of Louisiana.

Later, it was all clear that the person was someone else and not Brandon from Swamp People.

How much is Troy Landry worth?

Troy Landry has gathered a vast amount of fortune over his long career. It’s pretty clear that his professional and business endeavors have certainly made him a millionaire in recent times.

His primary source of income includes catching craw-fish, alligators while being a television personality from Swamp People. Troy’s net worth is an outstanding figure of $3 million as of 2020. His salary is estimated to be around $30,000 per episode. In addition, he operates his own family business along with his sons.

Troy Landry is a famous icon in social media. The King of the Swamps has thousands of followers on his Facebook, Twitter, and Instagram. He is very active in his social accounts as he often posts his personal and professional life to the viewers.

Recently, Troy was promoting Season 11 of Swamp People on his Facebook. He was inspiring the fans to keep watching him and the entire Landry family in action.

Also, he was recently showing off his new shoes on his Instagram.