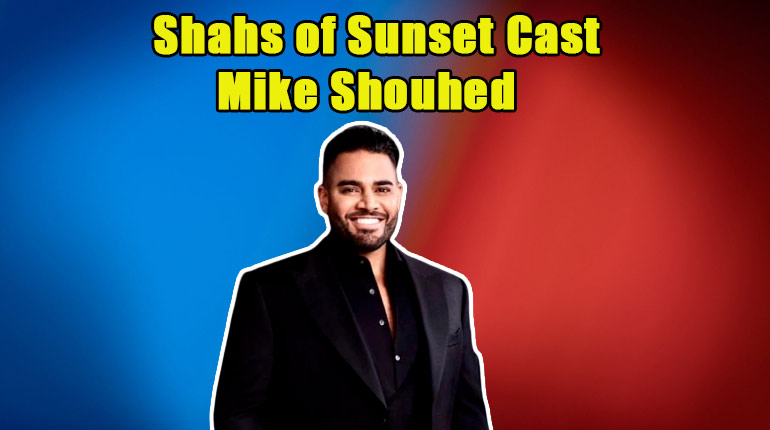 In our youth, most of us are all about the party life. Our love life is also mostly about hooking up with new people and flexible or temporary relationship. Slowly but surely, everybody bores out of that life, though, with most people tiring out of the flaky relationships.

If a TV personality like Mike Shouhed, infamous for a lifestyle like that is now leaving it for a more stable dating life, then what more proof could you need. Mike Shouhed’s married and dating life in the past hasn’t exactly been a walk in the park due to that lifestyle, but we can clearly see him in a whole new avatar. Perhaps there is still a chance for him to make the wife of his current girlfriend.

It already looks like he is living a family life already, but who is Mike Shouhed’s girlfriend? Is she going to become the ‘Shahs of Sunset’ star’s wife soon? Wedding and Engagement updates, along with Mike Shouhed’s net worth and bio.

Mike Shouhed’s Dating Life with Girlfriend; How it Began

Mike Shouhed right now, happily dating girlfriend Paulina Ben-Cohen. They started dating from late 2019 and have surprisingly are going quite strong in their dating life. Mike Shouhed and his girlfriend met for the first time through mutual friends. You would expect their romantic relationship to start off in a similarly romantic venue like a 5-star restaurant, but in reality, their first date actually took place in a taco bell.

However, once they met, the place hardly mattered. The sparks began to fly right off the bat.

“I just looked at her and, in my own mind, I was like, I am going to marry you one day,” Shouhed said, further adding, “When you meet the right one, you just know. I am falling more in love with her every day that I’m with her because I just realize more things about her that are so lovable.”

So far, we hardly know anything about Mike’s girlfriend, Paulina, but according to her, she is the first Persian as well as the first Jewish girl that he is dating. It has to be both a little weird and exciting at the same time for Mike to be in a relationship with a girlfriend who is so similar to his ethnicity, faith, and upbringing.

Not much is known about Paulina Ben-Cohen, but she is a single mother. She already has two children from a past relationship. Her social media activities also show her being particularly fond of Jewelry like rings, watches, and necklaces or pendants, suggesting that she may be related to that profession.

However, she just defines herself as a ‘Mom’ in her Instagram bio, meaning she must take pride in that title. So far, there have been no ideas from either Mike or Paulina about getting married, but thanks to her kids, we can picture what their married life would look like easily.

According to Mike, both of her girlfriend’s kids are very close to him. Even he himself is surprised to the amount of love and affection he feels for the children that are not even his own,

“They give me life, and they give me energy again, it’s so amazing to watch them grow up,” he says about the six and 4-year-old kids who, according to him, already have him on the hook as they make him buy them chocolate or sushi.

Mike had a lot more to say on the topic of his girlfriend’s kids, and when he was done made, it seems like he was hoping for a family life with Paulina in the future.

“I love these two like they are my own. I want one or two or three of my own. [Paulina’s] young, and she makes me feel young, and we are going to try, let’s see.” He said

It is true that his girlfriend is just 28 years old, but the point of the matter is that Mike Shouhed seems full-on, ready to give the family life a shot. If that does not show his tenacity towards his changed ways and will to get married, this certainly will. In another interview with Meaww, Mike further spoke about a possible engagement with his girlfriend.

Caption: Mike Shouhed on married life to ex-wife and getting engaged to girlfriend

The topic initially was about his previous married life with wife Jessica Parido. We got to see the whole story on ‘Shahs of Sunset’ from their dating to married life to their separation to ultimately divorce and even their relationship after the divorce.

Mike Shouhed’s married life with ex-wife was short-lived from March 29, 2015, to November 20, 2019. The cause of their divorce was only said to be irreconcilable differences, but there were also rumors that Mike Shouhed was cheating on his wife of the time. Knowing Mike’s past as a bit of a womanizer, we can’t say these rumors sound very fake.

Whatever the reason may be, their relationship was not a good one from the start. His current girlfriend, Paulina, also was wary of dating Mike Shouhed in the beginning because she knew both his past and news of his extra-marital affair, but when you are in love, you are in love.

Mike Shouhed did mention the role of his married life being part of the reality show in the very end of it. So, he says that if their relationship ever reaches the next level like engagement, he will be keeping it a private affair. Once again, Mike Shouhed’s desires for his current girlfriend look like he really wants to make her his wife.

Caption: Mike Shouhed talks about being is a serious relationship with girlfriend

Well, even if he does not, we will be rooting for them to become husband and wife regardless. They make a damn good couple after all, and they will form a beautiful family as well.

Mike Shouhed Net Worth; How much is Shahs of Sunset’s cast worth?

Mike Shouhed’s net worth has to be the credit of not just his career as a TV personality and reality star but also his already exquisite lifestyle as a businessman. We do not know the salary that he makes through ‘Shahs of Sunset’ or other shows and projects anyway. What we do know his career apart from being a TV star.

Mike Shouhed, like co-star Reza Farahan, is involved in the real estate business as a broker. He is also an entrepreneur, investor, and developer of many small and large businesses. The 42-year-old has had some success in the clothing world. He has a T-shirt company and a Footwear company, ‘True Gold Style,’ which made it to Shoe Palace, a big feat for a no-name brand.

He currently is perhaps most famous for his Wellness and Cannabidiol brand ‘Ausante.’ Putting all of his many ventures to light, we can grab the idea of how large his net worth must be.

As for the exact number, however, his net worth as of 2012 was $3 million. Many people may forget that 2012 was the year ‘Shahs of Sunset’ was released. So, since then, through his celebrity status, Mike Shouhed’s net worth must have grown significantly over the years.

Mike Shouhed (Shahs of Sunset star) was born on October 12, 1978, in Tehran, Iran. Towering at the height of 5 feet and 4 inches, Mike Shouhed’s age as of 2020 will be 42 years. He was born to a businessman father and a housewife mother who later moved to the USA. By religion, he is Jewish. He has two sibling brothers by the name of David and Jonathan Shouhed.

A struggle in Mike Shouhed’s career has always been coming out of the shadow of his equally successful brothers. Mike once invested in a moving company that went south, and he had to sue them. He has also made other mistakes in the past, leaving his brother to come to help him out.