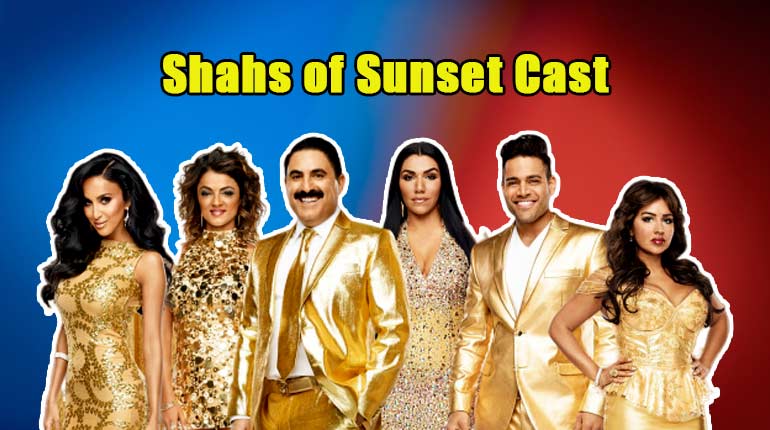 The Shahs of Sunset cast had a lot to say when they gathered up for their season 7 and 2019 season reunion. As fans, we love these reunions as they serve the purpose of any reality show platform of giving us its dosage of drama. But more importantly, it gives us information on both the aftermath of the prior season and the upcoming things to expect from the next season.

It is almost like a preview for the new season, and the 2019 reunion was no exception. Find out if the Shahs of Sunset cast are faring as they talked about in the season 7 reunion but before short bio and net worth on the whole cast.

MJ is a 47-year-old estate mediator who is an original cast member of the show. In the show, we see her often bicker with her mother and talk about her weight issues since her childhood. As a realtor, she is extremely successful, as you can tell from her lavish Beverly Hills lifestyle. Now, that she is a big reality star means that MJ from Shahs of Sunset should have a net worth.

We are right as Mercedes David or MJ’s net worth stands at an estimate of $5 million. MJ for the ‘Shahs of Sunset’ new season will deal with the aftermath of her overwhelming pregnancy. In case you missed out on all the drama, MJ almost had a miscarriage when delivering her baby boy, Shams, on April 17, 2019. However, despite the complications, Shams was alright, but the horror of her delivery was not over.

MJ was bleeding too much and thus had to be intubated while she was conscious. She spoke of the scare that both she and her husband, Tommy, had during that moment and how it may have caused her PTSD as she may never be able to have children again.

Mercedes, however, is clear on wanting more children, so she may have surrogates to have as much as three more children as siblings to her son, Shams, which she is already considering. Tommy and MJ’s relationship as husband and wife started from April 21, 2018, after meeting online and dating since 2017.

In the new season, MJ will also be addressing co-stars who she calls her friend, especially one of her best friends Rez Farahan who is also her colleague at her realtor business. She wants to know why no one came to visit her after such a traumatizing near-death experience when she was vulnerable. Even we are anxious to know how all of this plays out in season 8.

Reza Farahan is an Iranian born real estate agent from Tehran. His father was a Jew but converted to Islam when he married his mother. The 46-year-old is openly gay, and one of the main reasons he became a star in ‘Shahs of Sunset’ was to help other youth struggling with their sexuality.

One of the best real estate agents in his agency and LA, Reza Faahan, certainly must have a handsome net worth and salary combining it with his salary from that as a reality star of one of Bravo’s biggest shows. Reza Farahan’s net worth is approximately $7 million considering his salary from his recent haircare line, which was a big success.

He is married to Adam, a former model who he knows from 2010 but has had a tumultuous relationship before and post their married life. In the new season too, Reza’s relationship will reach a point where they had never before. Even is ‘Shahs of Sunset’ Reunion we got to learn Adam was not giving enough time and attention to husband, Reza. As season 8 progresses, it might be more than what meets the eye.

Reza already suspects husband Adam of having extra-marital affairs. Now his co-star Destiney Rose’s friend, Ali Shouri, tells Reza about revealing photos of Adam. Ali is clear that the photos could have an explanation, but he also heard reports of Adam being in a ‘Strip Jenga’ match with other men while Rea was on out of town for business trips. Reza confronts husband Adam, but even we don’t know what will happen here.

What do you think will happen? Be sure to watch the new season with us to find out.

Destiney Rose, professionally could not be in a better place. She is the founder and CEO of her own event organizing company called Liquid Sweets. Her business has been booming, which explains for Destiney Rose, who was born in 1982 in Iran, has a net worth estimated to be around $1.4 million.

Destiney Rose has only been part of the show since 2017, so; we are still getting to learn about her. Hopefully, the ‘Shahs of Sunset’ new season will have more cover on the 37-year-old. She did mention in the reunion that she was dating three people of which one was Persian. The new season of ‘Shahs of Sunset’ is set to see Destiney “Spiraling” and having troubles with friends and co-stars.

We are certainly curious to see what that means? Perhaps we will also finally get to see Destiney Rose dating. She has said that she was a “serial dater” who cut her boyfriends too soon. We would love to see that in action.

The beautiful Golnesa “GG” Gharachedaghi may be loose cannon but still has managed to indulge success in her businesses from hair extensions to her current dream business of cannabis. At a young age, she has become a successful entrepreneur, and her fiery temperament makes her a great addition to the reality show.

GG from Shahs of Sunset net worth is estimated to be approx. of a stunning $1.2 million. However, the beauty that is fond of collecting knives has come across as a mess in her personal life. After dating life with co-star, Nema Vand never took off, the 38-year-old who was born on November 27, 1981, in LA is taking a short-cut into motherhood.

Yes, in season 8, we will get to see GG pregnant through In-vitro Fertilization. GG is successfully pregnant after carefully choosing her sperm donor, the process which GG told us was like ‘Build-a-Bear Workshop.’ She even shared a snap of the baby from her ultra-sound.

Nema Vand, by profession, is a successful branding executive who was born (June 4, 1988) and bred in Los Angeles, USA. Due to this, he considers himself a ‘white-washed Iranian.’ The 31-year-old Shahs of Sunset star has a net worth of around $500,000.

While professionally he is sound, personally, his life has been devastating. Even his relationship with his parents is flaky, so think about how his dating life is. How can anyone forget the time he had feelings for co-star GG and almost even kissed her? He even broke up with his girlfriend for her, but maybe it was better for him; they never worked out. He also has been married and divorced in the past.

In the new season too, we will get to see him solve his complex relationship with ex-girlfriend and colleague Erica.

Mike Shouhed is a real estate agent born on October 12, 1978. Though he made some good money over the years, he has also lost some, especially in his Las Vegas deals. In ‘Shahs of Sunset’ new season, he will look to hit the biggest jackpot of his career by a multi-million dollar deal to get out from the shadows of his brothers. He currently has a net worth, which is at an estimate of $2.15 million, but perhaps his net worth will increase this season.

Mike Should also look to bring that change in his dating and married life. He has a new girlfriend he is dating, Paulina, who is of Jewish and Persian ethnicity. The 31-year-old spoke of his future plans about the relationship with his girlfriend in the season 7 reunion as well.

Hopefully, it will turn out better than his former married life to Jessica Parido, which only lasted eight months from March 29, 2015, to their divorce on November 20, 2015.

Season 8 will mark the debut of a new cast member, Sara Jeihooni, who is a good friend of Reza Farahan. She introduces herself in Reza’s housewarming party, and she is coming to the show in hopes of making more friends of her community. Will her decision fan out for her? Will the old cast members accept her with open arms?

It will be interesting to see how she does in ‘Shahs of Sunset’ new season. Till now, the only thing we know is that she is 33 years of age who resides in West Hollywood, but she is from Indiana, where she was raised and did college. Sara was raised by a single mother after her father passed away. She is working to be a Physician’s liaison, and a shocking detail of her dating life is that she is an ex-girlfriend of R. Kelly in 2013.

We dished out what we know about the new season for the whole cast of ‘Shahs of sunset.’ Season 8 of the Bravo reality series premiered on February 9, 2020, and it will be returning every Sunday at 9 pm EST. So, you better hurry up before you miss out on any more episodes of the series. The next episode titled ‘A Very Shouhed Passover’ will feature on February 16.

If the 2nd episode is any closer to the dramatic episode 1, ‘Naked Jenga and Afraid’ whose contents we spoke of earlier, you are in for a wild ride.