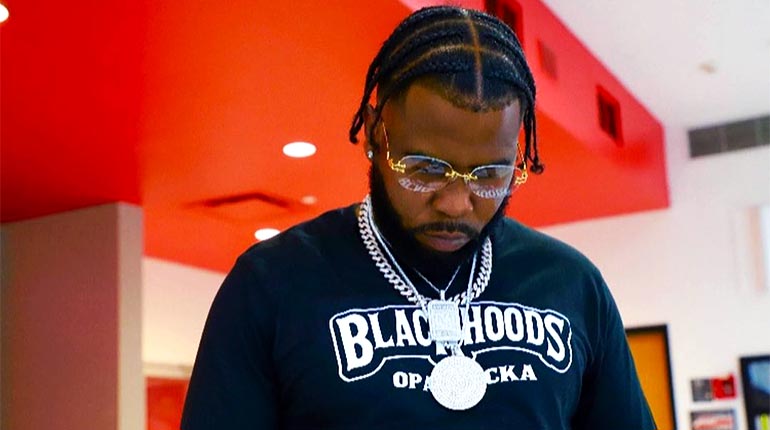 It seems like some people are born to lead pretty unfortunate and tragic lives. Rapper Brisco is one of such people. Granted that he has nobody but himself to blame for his most recent tragedy, he does get our sympathy for the fact that the past hasn’t been very merciful to him.

Find out what disaster and misgivings fell upon Brisco and his family, along with his net worth and bio.

The 37-year-old rapper was recently released from prison after serving jail time for four years and three months in April 2019. However, the rapper somehow managed to shorten his jail time for an early release. Since his sentencing was on March 31, 2017, he only did around two years and one month. The justice system is lenient to criminals who show promise of change.

Caption: Brisco’s picture from the day got out of jail

Brisco’s good behavior in jail, among other things, could have prompted his early release. Brisco was convicted of counterfeit, fraud, and identity theft, among other things. He was caught, only after a high-speed chase with the law enforcement on two accounts.

Why did Brisco go to Jail?

The Love & Hip Hop: Miami star went to Jail for three main crimes, identity theft, dealing with counterfeit money, and frauds. He was trying to sell fake capital, worth over $150,000, a few thousands of which he tried to sell to an undercover cop who later used the recording of their deals as evidence in his hearing.

He and a group of his friends also were part of an illicit ring that ran various identity and credit card frauds. One of the multiple people whose identity Brisco stole was ironically a judge. Brisco’s pretending to be the judge and committing fraudulent transactions were all caught on tape. That, as well as several other videos and audio recordings, were among the evidence which built up a strong case against the LHHM star.

In total, $200,000 was the estimated overall fraud that Brisco was a part of. Brisco was already on probation for possession of drugs when he committed these crimes. On top of all that, Brisco also led the law enforcement, trying to apprehend him on two separate high-speed chases, one of which at speeds reaching 100 mph.

So, the rapper was let go and later tracked down and arrested at the Hallandale Beach strip club where he was performing.

We don’t have much information about his married life or children. We do know he has two sons, as both of them were present at the court to help his defense. His two sons are aged 9 and 15 years old.

Caption: Brisco with his two sons

His older son even got to the stand to ask forgiveness in his father’s stead. The youngster who was only 13 back then could not even give his full speech properly as he started to cry for his father midway. Even Brisco had to remove his glasses to wipe the tears from his eyes upon seeing his son’s emotions. His sons may have contributed in getting him a little bit more lenient punishment.

Caption: Brisco with his Sons

Brisco’s real name is British Alexander Mitchell was born on June 28, 1982, in Opa-Locka, Florida. He had a rough childhood from the start as his mother passed away when he was just nine years old from heart failure.

He at least then had his brother, but even he left him when he was just 13 years old after he died in a car accident. Mitchell also had to relive a similar nightmare when one of his cousins also fell victim to a hit and run and needed to be hospitalized for severe injuries.

Rapper Brisco or British A. Mitchell, despite his shaky past, boasts quite an impressive career. He signed with Pop Boy Entertainment as he knew its owner, E-class, since he was 14 years old by a friend’s cousin. However, his first payment would come from his mother’s life-saving. Of course, in the hands of an upcoming rapper, it would not last long. Brisco recalls having spent all the $400,000 he got within six months.

He started as a guest performer in DJ Khaled’s tracks ‘Listennn… the Album in 2006 and then again in multiple tracks of Khaled’s album ‘We the Best.’ He also had a guest appearance in ‘Port of Miami by Rick Ross and Lil Wayne. He would also sing in Lil Wayne’s ‘The Carter III’ which won the 2009 Grammy for the Best Award.

Caption: Brisco’s music video ‘In the hood’ with Lil Wayne

All of his accomplishments need to be kept in mind while estimating his net worth. Brisco’s net worth is approximately $1.5 million. Considering that he must have had to pay millions in court proceedings and restitution, it is awe-inspiring that he is still able to maintain such a large net worth. We hope that he does not waste his second chance out of jail. He certainly has two lovely sons who need their father around to raise them.