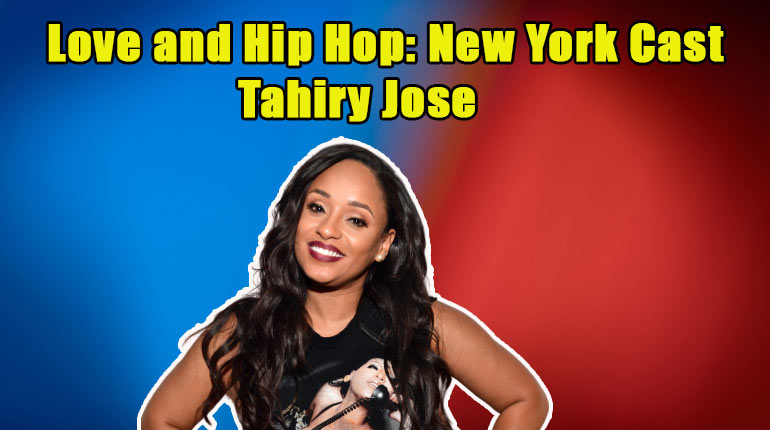 There used to be a time when reality show survived entirely on causing and stirring relationship dramas. We would only hear about dating and break-ups, weddings, and divorces. However, reality shows have come a long way since those days, and now even reality stars keep their relationships and dating life completely private.

You would think that personalities like Tahiry Jose are not active in their dating life, but are you sure? We are here to confirm if she has a boyfriend or not, along with Tahiry Jose’s net worth and wiki-bio including her age. We promise it will be worth your time, so let us begin.

When we speak about Tahiry Jose, fans of ‘Love and Hip Hop: New York’ will first remember her on-again-off-again relationship with host and critic Joe Budden. The last we saw of Tahiry Jose before her return to LHHNY was in season 4 when she was still dating Joe Budden.

Viewers clearly remember Joe Budden took his then-girlfriend Tahiry on a romantic date in New York City and stopping before the Times Square, stunning everybody as he proposed to Tahiry Jose in front of a huge crowd. Just when you thought it could not get any more surprising, Tahiry Jose did not accept his proposal.

Why would she reject a man she was dating from 2005 till 2012? –Because even though they were dating for so long, it was never a stable relationship. They would often break-up only to start dating again for different reasons, including cheating accusations. Joe Budden knowing his past faults in their relationship, was about to commit to getting engaged and eventually married to Tahiry.

So, Tahiry was very aware and did not regret her decision years later. Moreover, Tahiry was also not ready for her shaky engagement and wedding to be a TV affair, witnessed by millions of viewers.

Before her season 10 return, Tahiry Jose went on a rant against LHHNY’s production team for editing clips in a way to make it appear like Joe Budden was ready to get back with the Jose, but she was not clear on what to do.

“YA’ll TRIED IT!!!! EDITING IS A B****!” she wrote in the caption of a video where she is showing disbelief to the whole ordeal.

Caption: Tahiry Jose vents on LHHNY before her return for her wrong portrayal

Tahiry Jose was dating singer/songwriter Treyz Songz in 2009 after breaking up with Joe Budden for a while. Then she dated former Cleveland Cavaliers player, JR Smith, in 2012. She was also dating Housten Rockets’ basketball player, James Harden, from 2013 to 2014. Her most recent boyfriend was A$AP Rocky, whom she dated from 2014 to 2015.

In more recent years, we have not heard of Tahiry dating a new boyfriend yet. Maybe that will change in this new season of Love and Hip Hop: New York.’ However, you will read about Tahiry Jose’s net worth and understand that she is better off focusing on her career rather than focusing on boyfriends and kids.

Tahiry Jose’s Net Worth is her Full Focus

Tahiry Jose has always been the one to make the hustle. She came from a middle-class family, so she has always given a lot of focus towards her net worth and career. The reality star started as a model, even reaching covers for magazines like ‘King.’ She used this to transcend into her acting career.

She starred as a video girl in the 2011 movie ‘Video Girl’ and then an appearance in the 2012 thriller ‘Interludes.’ In 2013 she was featured in Ryan Hankley’s short film, ‘Take no Shit! By Ryan Hankley,” and the same year the film, ‘How to Commit Fraud’ came out with her as a guest’s appearance. All of this was enough to garner the attention of the LHHNY’s casting team to chose her for the series.

Tahiry Jose’s net worth took a huge boost after she became the cast member of Love & Hip Hop: New York for consecutive seasons 4 and 5. She will now be returning to the series after making brief supporting cameos in the past. In the meantime, she starred in another movie in 2015 called ‘Beautiful Destroyer’ in a notable role.

Tahiry Jose was born in 1979, where she celebrates her birthday on May 5 in Harlem, New York. She was born in a middle-class family of Dominican ethnicity to mother, Lizzy Mateo. She completed her primary schooling from a New York public school and attended John Jay College of Criminal Justice.

As we said, Jose is a hustler; she would work to help her parents pay for her own education. She even worked as a waitress and hostess in night clubs during the financial crisis of her life. As they say, it isn’t where you are today, but where you are tomorrow that matters. We wish her more luck in her career and dating life in the future. You can follow Tahiry Jose on Twitter and Instagram for more info on her daily life.