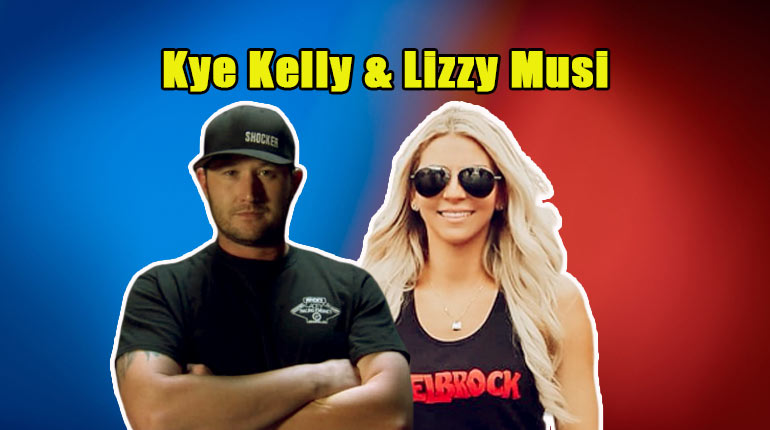 Some couples show so much chemistry together that they are practically married. In the field of action reality series, we barely get to see this, but luckily there are adorable ones like Kye Kelley and his girlfriend Lizzy Musi in ‘Street Outlaws.’ It is a nice little change to see them, now and then from the otherwise hectic show full of high-speed races and loud cars.

Learn why we think Kye Kelley and Lizzy Musi, who are just dating right now is already a married couple along with Lizzy Musi’s net worth and bio.

Lizzy Musi and Kye Kelly’s dating life today is no secret, but it did not start that way. Both Lizzy and Kye would maintain their silence despite rumors swindling about their relationship. It wasn’t until 2017 that Kye Kelley finally made it official through his Facebook page, and later Musi followed by asking her followers to pray for her boyfriend while he was having hernia surgery.

However, ever since they became official to the public, they have been inseparable since. We don’t think we remember the last time we saw Lizzy Musi without her boyfriend by her side in ‘Street Outlaws.’ If you follow either Lizzy or Kye on social media, you would know that they are inseparable there as well. Here is she wishing Kye Kelley a happy birthday, which is on May 18, 1988.

They have a series of adorable moments, but what makes them like a married couple is not just romantically adhering posts like the one above. You will also find moments where they bicker and tease fun with each other occasionally as a married couple would. Here is a video of Kye trying to get away to go hunting, but Lizzy, who is quite the outdoorswoman and hunter herself, like a nagging wife, prohibits him from doing it.

Lizzy Musi and Kye Kelley have not married, but the way things are going, it will happen today or tomorrow. For now, they are only dating, but the video above suggests that they already live together as well. Lizzy Musi’s dating life before this is non-existent; perhaps she was working her way up in the driving circuit.

Her boyfriend Kye Kelley, on the other hand, was married previously to his ex-wife Alisa Mote. He has one daughter with his ex-wife by the name of Kenadeigh Alexa Kelley. He also has a son from a previous relationship, not sure if a married one or just fling with a woman named Sarah.

Honestly, it is not entirely shocking to see Lizzy Musi be one of the fastest women in the world; after all, racing runs in her blood. Her father is Pat Musi, is a drag racing legend, notorious both in the streets and the official tracks. When he gave up on racing, he started building engines, and that is how the award-winning Musi Racing Engines Shop came into existence.

Lizzy Musi Net Worth; How much does the Street Outlaws star earn?

Lizzy Musi now races a nitro-turbo Camaro worked on by both her father and her boyfriend and is a formidable racer in the Professional Drag Racer’s Association (PDRA). She was the first woman ever to reach 200 MPH speed in an 8-mile race, and her fastest record has been 3.75 at 201 MPH.

On top of her formidable racing career, her appearance in ‘Street Outlaws’ as a racer and Kye Kelley’s girlfriend also increases her yearly salary. We can’t say we are surprised when we learned about Lizzy Musi’s net worth to be over $500,000.

Lizzy Musi was born on January 1, 1991, in Carteret, New Jersey. As already explained, with a father like Pat Musi, Lizzy grew up in and around race cars and racing tracks. She and her sister would play with toy cars instead of dolls like most other girls their age. It was no wonder that Lizzy Musi will find herself being a professional drag-racer in the future.

The road was not easy for the 29-years old as she had a nasty accident in 2012 when she was just starting out racing. She was in a 1968 Camaro, which showed impressive start as it ran at 170 MPH for 4.34 seconds, but she lost control and crashed it. Luckily, Musi was able to get her out of the car without any serious injuries.

She can make quite a fortune from her social media platforms alone, and she probably does, which may be inclusive in her considerable net worth.