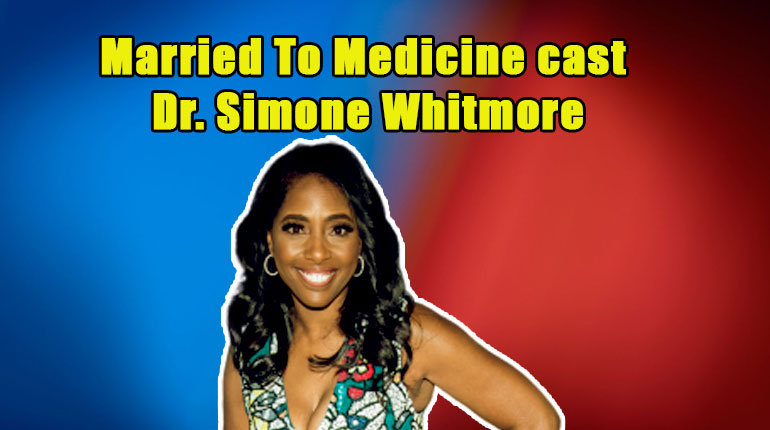 Anyone who has watched the entire series of Bravo’s “Married to Medicine” knows that lots of things changed in the show. The show follows the luxurious lifestyles of bravolebrities such as fashion, beauty, and the marvelous houses they live in.

When is Dr. Simone Whitmore Birthday?

Dr. Simone is a doctor and a reality star. Simone became a household name soon after she made her appearance on Bravo’s reality show “Married to Medicine” in 2013. Whitmore was born in 1967 in Nashville, Tennessee, to a single mother who raised her through a lot of hardships. She celebrates her birthday on February 23rd.

Back in 2019, Dr. Simone took to Instagram and posted a photo. She celebrated her 52nd birthday with her husband and friends. In the caption, she wrote, “Celebrating my birthday,” and even mentioned her husband.

Simone graduated from Spelman College in Biology with Pre-Medicine. Later, she enrolled at Tennessee State University and completed her residency at Boston Medical Center. So she is pretty much born and bred in Tennesse.

Dr. Simone Whitmore shocked her fans and castmates in January 2018 by saying that she and her husband would be divorcing after 21 years of marriage at the season 5 reunion. As soon as the news broke, the cast members convince the duo to work things out.

PEOPLE reported that the couple split in the mid-year 2017. Dr. Simone bought another house and started living there without her kids and husband. Watch the video below.

She told Bravo why she chose to end her marriage. She talked about her marital struggles with her husband since season 1. Whitmore said she has no more feelings for Cecil. Dr. Whitmore told Bravo, Cecil’s female friend, Tammy was the reason that forced her to file for divorce. Cecil apparently was having dinner with her on his birthday, despite, Simone clearly told him not to.

Talking to PEOPLE, Simone told she couldn’t control the past. So the two decided to start their relationship with something new, something better, where they feel love and enjoy each other’s company. Plus, Simone told Andy Cohen on ‘What Happens Live‘ that Cecil had now let this Tammy woman out of his life.

Dr. Simone and her husband even went for counseling so they could improve their relationship. Even the two took the advice of their castmates. In 2019, the couple reconciled and moved back into the North House.

Dr. Simone Whitmore met her husband, Cecil, when she was 23. At the time, she was pursuing her pre-medicine in Spelman and eventually got hitched in May 1996.

Dr. Simone Whitmore is a Mother of Two Children

Dr. Simone and Cecil share two sons, Miles and Michael. The duo’s oldest son, Miles, is 21 years old while the youngest son Michael is 18. Going through her Instagram, she posts pictures with her sons.

The family of four even goes on a vacation to spend some quality time. In December 2019, Dr. Whitmore posted a family photo and captioned it that they are ready for a trip.

Dr. Simone’s eldest son, Miles, is grown up now. Miles is currently pursuing his bachelor’s degree, but the name of the university and educational background remain unrevealed. Her husband, Cecil, wished Miles 21th birthday through this Instagram post.

Simone’s son Michael was born in May 2002. In 2019, Dr. Simone Whitmore wished a happy birth to her son Michael via her Instagram. She posted pictures of Michael. Whitmore wrote, Michael has grown into a young man and proud of him.

Michael Whitmore’s Instagram goes by “Hollywood.mw,” where he posts numerous pictures of hanging out with his friends and family. He loves playing basketball and plays for the Woodward Academy, which shows it’s athletic dominance in multiple fields, including basketball. Here is Dr. Simone Whitmore boasting about her son’s basketball team, which has been undefeated in their regional league so far.

How Much is the Net Worth of Dr. Simone Whitmore?

The stars of Bravo’s Married to Medicine earns a pretty impressive salary for appearing in the show. Dr. Simone is an obstetrician-gynecologist. She also has her own Atlanta Practice, North Perimeter OBGYN.

In 2018, Dr. Simone’s net worth was $300,000, but we were having a hard time verifying it with credible sources. We were sure that Simone Whitmore’s net worth is much more than that considering how it is increasing every year. Thankfully in 2020, we have a more accurate net worth of Dr. Simone Whitmore, which is around $3.5 million.

The average salary of Obstetrician-gynecologists in the USA is $286,000 per year. Additionally, Married to Medicine star, Dr. Whitmore, who is self-employed and probably makes a bit more income than other cast members.

In the season 7 reunion of Married to Medicine, it looked like Simone, and Jackie Walters’s friendship started to fall apart. The two have been friends in most of the show. Throughout the season, Dr. Simone and Dr. Jackie had some issues.

Their fight started when Dr. Heavenly Kims insulted Simone’s husband, Cecil, through a Twitter post. At the time, Dr. Jackie Walters took the side of Heavenly instead of her. Jackie asked Simone to apologize to Heavenly for the way she acted, but Simone disagreed.

This is the reason why the two friends are talking to each other. It sounds like their friendship is over.

Does Dr. Simone Whitmore Have Account on Social Media?

The TV personality earns fame and fortune through Bravo’s “Married to Medicine.” In addition, Simone is very much active on social media platforms, including Instagram, Twitter.

Her Instagram username is “drsswhit,” where she has more than 360k followers. Simone’s social media is filled with photos and videos. She keeps updating about herself via her social media accounts.