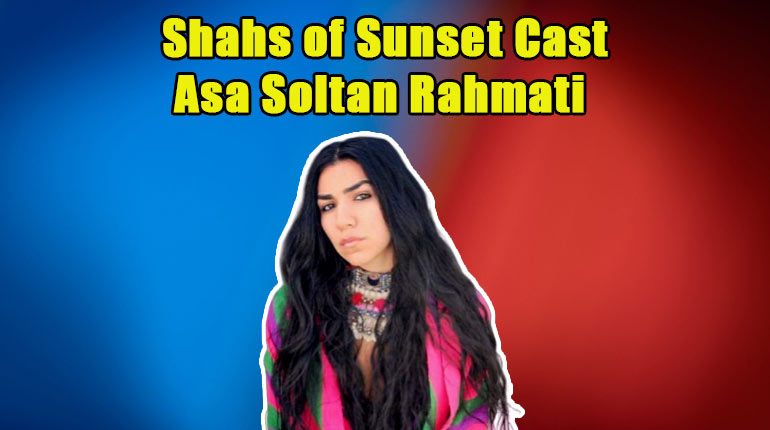 People really like to think that celebrities have it better than common people and often disregard the unique problems they face. One of the hard decisions that many big celebrities face is the struggle of handling both their career and personal lives at the same time. Some learn to balance them eventually; others either completely sacrifice or compromise to make it work.

We want to be clear on how this situation applies to Asa Soltan Rahmati. Here you will learn why she never did return to ‘Shahs of Sunset‘ as the leading cast member. Has the reason something to do with her marriage and family life? Is it due to her pregnancy and kid? Yes, but it is a little more complicated than media makes it out to be. All answers here with Asa Soltan’s net worth and bio.

Asa Soltan Rahmati’s Net Worth; How much is Shahs of Sunset star worth?

We made it sound like Asa Soltan Rahmati almost quit from her career up there. We want to apologize as; she is very much active, and the details of which you will understand as you read below. We just have to be forthcoming about this for you to understand Asa Soltan’s net worth, which is a massive amount that wouldn’t be possible without a splendid career.

We don’t have to go to great lengths to explain Asa Soltan’s career as a reality star. She was one of the original cast members of the show and appeared in the series in continuity until season 6. Since then too, she has still been appearing in the show, maybe not as the main star but she should still make a handsome salary. Her net worth as of 2012 was approximately $250,000.

After 2012, however, Soltan began to gain traction in her career, and by 2013, her net worth had grown significantly to an estimate of nearly $3 million. As of 2020, we only know that her net worth must have further grown, which is why Asa is in no urgency to reclaim her title as the main cast member.

Net Worth from Career outside Reality-TV

All Shahs are a bit of an entrepreneur, we guess, but Asa Soltan’s net worth is also largely through the influence of her own company, Diamond Water, a bottled water company selling high-pH alkaline water. Moreover, she has further TV appearances in shows like ‘Watch What Happens Live with Andy Cohen,’ ‘The Jeff Probst Show,’ and ‘Dish Nation.’

The 43-year-old is surely an all-around artist. She also has a passion in painting, and one of her paintings was a part of the ‘Imagining Ourselves’ art book by the International Women’s Museum of San Francisco.

Asa Soltan Rahmati’s dating even After Child with Boyfriend

Despite dating for a decade or so, they are still not married. However, with the birth of their son, Soltan Jackson, on January 20, 2017, there is nothing that divides them from looking like a married couple or rather a husband and wife. Recently Asa Soltan’s son turned three years old, and she was sure to celebrate along with her boyfriend and baby daddy.

Her husband, Jermaine Jackson II, takes the name of his father, Jermaine Jackson, who was a sibling brother of the legendary pop singer Michael Jackson as well as Janet Jackson and the rest of the Jackson siblings. So, he, too, has ties to the music industry.

Mercedes Javid or MJ was already accusing Asa of not committing to her life as a reality star, and she was right to a certain extent. After all, not once did we get to Jermaine Jackson or hear any details of her boyfriend on the show. Fans were also beginning to grow a little wary of Asa Soltan, not opening up about her dating life after she became pregnant during the sixth season.

Asa Soltan, however, had no intention of revealing anything about her dating life and also wanted to keep the birth of her son, Soltan Jackson away from the show. Understanding she couldn’t continue doing both, she left her position as one of the Shahs but did have a few appearances on season 7.

Perhaps after leaving the show but still appearing as a supporting character gave Asa Soltan just the freedom she was looking for to keep her dating and family life private while also qualifying as a reality star. There could possibly not be a better explanation for her to leave from the show

Asa Soltan was born on September 1, 1976, in Ahwaz, Iran, unlike many of her co-stars who were born and bred in the USA. She spent her childhood in Europe, and only then did she come to the USA, where she currently lives with other Shahs in California. In her Twitter bio, she includes that she is a war survivor who could mean that she left Iran only after the beginning of the Iran-Iraq war in the 1980s.

She has one sibling brother by the name of Arta Soltan. Furthermore, the ‘Shahs of Sunset’ star has a degree in psychology and philosophy at the University of California. She leads a peaceful family like with her boyfriend and son in Venice, California.