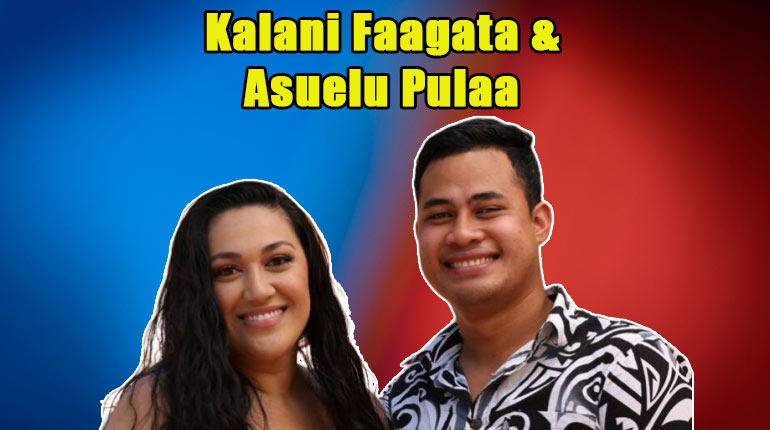 You know love has no barriers. Likewise, Kalani Faagata fell in love with a guy while she travels to the USA, and eventually, they ended in marrying each other. But the question is, how they met and began their love story? For this, you have to go in detail.

If you have watched the TLC’s reality series, 90 Day Fiance, then you might have got what is talking about. Kalani rose to stardom after she participated in the reality series to find her perfect match. However, she did recover and got married. Here you need to know about the reality star, Kalani Faagata, her husband Asuelu Pulaa, divorce reason in her wiki bio.

Kalani was born and raised in California, United States, and thus, hold American citizenship but is of Samoan ethnicity. Faagata is proud of her heritage. She grew up in the Mormon LDS faith until her early 20s.

Unlike other celebrities, she hasn’t disclosed much about her family, parents, and siblings. Back in 2017, she posted a photo of her parents with a lengthy caption.

Kalani featured on the sixth season of 90 Day Fiance. She and Asuelu Pulaa both feature on the show. Kalani met Asuela when she was on vacation in Samoa in July 2016. At the time, Asuelu was working as an activities director at the resort.

The couple keeps in touch after their first meeting and during, Kalani’s second visit to Samoa, she expressed her feelings to Asuelu Pulaa. As a result, she got pregnant and got married.

The couple also made their appearance on 90 Day Fiance: Pillow Talk, a spin-off show that features former cast members offering commentary on episodes on the reality franchise’s newest seasons.

Kalani & Auselu’s Fight in 90 Day Fiance: Happily Ever After

Fagaata and Pulaa tried to keep their romance alive, but due to some issues, they fight. Reportedly, Kalani and Auselu argued on the way to their family vacation to California. Asuelu Pulaa pushed back against his wife, and they both argued over women’s jobs. The reality star revealed that she wasn’t comfortable bringing her children to Samoa while there was a dangerous measles outbreak.

Asuelu compared his wife to Samoan women and said, American women had the benefit of technology, which made their jobs as mothers more convenient. On the other hand, women in Samoa use their hands to do all the work. During the argument, Kalani called her husband “a liar,” meanwhile, Asuelu Pulau called her “Lying b*tch.”

Kalani and Asuelu have two sons, Oliver and Kennedy. Oliver was born in January 2018 and celebrated his second birthday with his brother and parents. On 2nd birthday of Oliver, Kalani uploaded a few pictures of them on which they’re hanging out in the park.

In 2019, Kalani posted an Instagram update in which she revealed her second pregnancy has been difficult. She and her husband welcomed their second son, Kennedy, in 2019. He turned one on May 8, 2020. The 90 Day Fiance took to Instagram to share some glimpse of Kennedy’s birthday.

The 90 Day Fiance couple runs their own YouTube Channel called ‘Kalani & Asuelu‘ that created in December 2018. The two upload the videos of traveling and personal vlogs. So far, they have garnered over 61,000 subscribers, and their videos have been watched over 2 million times.

Also, the couple uploaded videos of Samoan Food and even talked about their relationship.

Kalani is a Fan of Sister Wives

Kalani herself a reality star and loves watching reality shows. She is a huge fan of TLC’s reality television series, Sisters Wives. Like the Brown family, she also spent some good time of her life living in Utah. Also, the couple hung out with Sister Wives’ casts Robyn & Kody Brown.

How Much is Kalani Faagata’s Net Worth?

Kalani Faagata and Asuelu Pulaa came to limelight after appearing the reality TV series, 90 Day Fiance. The show features the engaged couples where one is from the USA while the other one is from a different country. The person who was born in the USA is allowed to stay in the country with a 90-day fiancé.

If the couple doesn’t get married, then the non-US citizen has to return to their country. The couples who appear on the show make good money. Some online sources claimed that they don’t earn that much for being on the show. So, how much Kalani and her husband make per season?

Kalani and Asuelu appeared in the sixth season and earned fame and fortune. It is reported that Kalani and Asuelu’s net worth is $3 million. Besides the show, no one knows what her profession is.

If you would like to know more about her, then follow her on the Instagram page that goes by the name “kalanifaagata.” On Instagram’s bio, Faagata states, she is a mom of two sons, Oliver and Kennedy.