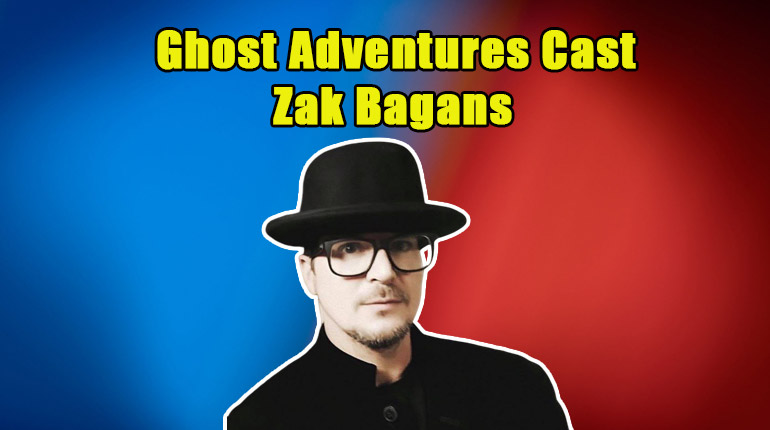 Do you believe in ghosts? If you do, then you might hear lots of stories about a spirit from your grandparents while growing up. But some people don’t believe in the supernatural. Likewise, Zak Bagans is the one, the host of Travel’s Deadly Possessions. The question is, what could have made Bagans believe in paranormal.

Let’s break down about Zak Bagans’ net worth, married life, and wife.

Zak Bagans is a Paranormal Investigator

America reality star Zak Bagans is a host, ghost investigator as well as an executive producer of Travel Channel’s series “Ghost Adventures.” With his team, he travels across the nation and worldwide to haunted places and collected the evidence.

Zak believed in ghosts when he had an encounter with a suicidal woman in his previous apartment in Michigan. Since then, he interested in paranormal and focused on it. Bagans pursued his career in documentary film-making and moved to Nevada, where he met fellow Aaron Goodwin, who is also a paranormal investigator.

After that, he teamed up with fellow Aaron and Nick Groff to produce a paranormal show “Ghost Adventures.” The first season of the show aired on SciFi Channel in 2007, and eventually, the series premiered in Travel Channel from 2008.

Zak Bagans Back with New Season of Ghost Adventures

Fans of Ghost Adventures, this year, Zak is back on TV with all-new series, Ghost Adventures: Screaming Room. Before the new season premiered, Bagans and his crew Aaron Goodwin, Jay Wasley, and Billy Tolley gather in their screening room and rewind their unforgettable moments over the years.

Ghost Adventures: Screaming Room premiered on January 2nd, 2020, at 9|8c on Travel Channel. The crew members investigate locations that are reported to be haunted. They have equipment such as green-tinted night vision cameras, electromagnetic detectors, and other ghostbusting gadgets that captured some hair raising moments.

Is Zak Bagans in a Relationship with Holly Madison?

You are wondering to know if the host of Ghost Adventures of Zak Bagans is married or not. Though Zak becomes famous in the television industry, his personal life is not as popular as his career. Back in 2019, he rumored to be date ex-wife of Pasquale Rotella, Holly Madison, who is a former playboy model.

Daily Mail reported that Holly and Zak are dating. However, the two tried to keep their relationship out of the spotlight. The news was first reported by TMZ when Holly visited on Zak’s haunted museum in Las Vegas in May 2019. However, Zak hasn’t posted any photo of the two on his social media.

His girlfriend is a mother of two children born from her previous marriage with Pasquale. However, Madison and Rotella are co-parenting their two kids, Rainbow Aurora, and Forest Leonardo Antonio.

Furthermore, both Bagans and Madison have followed on each other social media and also comments on the posts. On December 5th, 2019, Zak posted a picture of celebrating the release of his new book titled “Ghost Hunting For Dummies” on social media such as Twitter and Instagram.

Many of his fans congratulated him on his success. On the other hand, the former Playboy bunny, Holly Madison also commented on the post that read,

Forty-three years old paranormal investigator Zak earns incredible money form his career. So far, he makes money from other ventures, including the TV shows such as Ghost Adventures: Aftershocks, Deadly Possessions. Zak Bagans’ has a total net worth of $30 million in 2020.

Bagans is also an author of the best-selling books. Further, he has The Haunted Museum in Las Vegas and a haunted house in Indiana.

Ghost Adventures Host is a dog lover. He teaches dogs to hunt ghosts and believes that animals have a heightened awareness of spirits. Zak travels with his dog, Gracie, when he is not working. He even shares numerous pictures of his dog on his Instagram.

In August 2019, he posted a picture of Gracie and his father’s grave on Instagram. Scroll down to see.

Zak Bagans has tattoos in different parts of his body. He has inked a Celtic tattoo on his arm. The tattoo shows he believes in god and spirit. Furthermore, he has tattooed one of the German quoted in his inner arm. The tattoo goes like “Denn die Todten Reiten Schnell” and even shared on Instagram.

On his Instagram bio, he wrote, “there is much to be learned from beasts.” Also, you can visit on his website, TheHauntedMuseum, where you can see his collection.