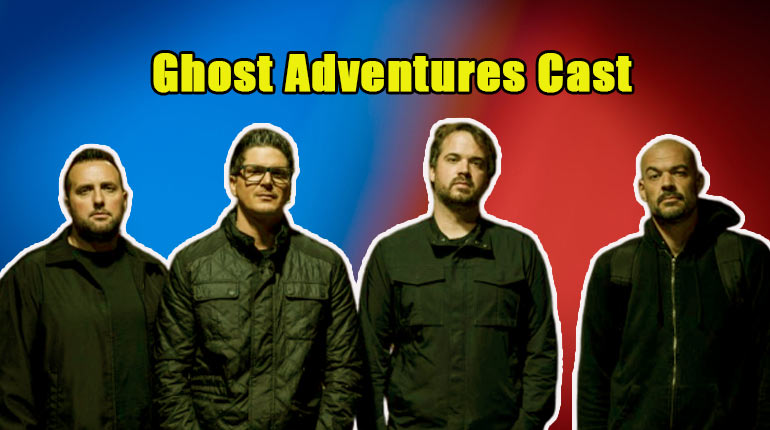 Whether you are a believer, if you like facing fears, then you will love the paranormal show ‘Ghost Adventures.’ The show premiered on the Syfy Channel in October 2008 on Travel Channel. It is one of the highest-rated series on the television.

The cast and crew go in the haunted locations around the country as well as abroad. After that, the team discovers unexplained supernatural phenomena. Let’s meet the cast of Ghost Adventures.

Zak Bagans is the host and founder of the paranormal show ‘Ghost Adventures.’ Also, he is a paranormal investigator, TV personality, and author. According to Bagans, he became interested in paranormal after he had experienced with the ghost of a suicidal woman in his former apartment in Michigan.

The 42 years old TV personality has been working in this field for more than fifteen years. He followed his passion and teamed up with Nick Groff and Aaron Goodwin and formed a company called Ghost Adventures. The trio investigates the places and homes that are haunted. Back in 2017, Zak has opened the haunted museum in Las Vegas, Nevada.

Aside from that, he hosted the spin-off program ‘Paranormal Challenge’ on Travel Challenge. Furthermore, he served as an executive producer for Travel Channel’s Paranormal Paparazzi and Netherworld. Recently, he featured in the film titled “Sympathy, Said the Shark.” Also, Zak directed and produced the documentary ‘The Demon House’ that released in 2016.

In addition to a TV career, Zak Bagans is an authored and penned two books with Kelly Crigger, “I am Haunted: Living Life Through the Dead,” and “Dark Work: Into the Shadows with the Lead Investigator of the Ghost Adventures Crew.” Bagans is not married not yet, but it is hard to ascertain his current relationship status.

Goodwin worked on several projects from red-carpet movie premieres to sports events. He had worked with the team for over a decade and reportedly fired for making up fake stories of paranormal on the show.

The cameraman was married to an ex-wife named Sheena Goodwin. Aside from the show, Aaron has his own clothing line ‘Big Steppin.’

Billy Tolley is a vital cast member of the ‘Ghost Adventures.’ He analyzes the audio recording that is recorded while they investigated in the haunted place. He records the conversation of that take in alternate tones and frequencies.

Before joining the reality TV series, he worked as a video editor and production software. Later he switched his career focus to the supernatural and eventually interested in EVPs (Electronic Voice Phenomena). Thus, he formed his own team named the Las Vegas Paranormal of Mysterious Phenomena Squad.

Billy Tolley also is a presenter at several Darkness Radio Events, and even you can see his works on Aeron’s Vlogs on YouTube. The reality star illy makes a significant amount of income from his profession. Tolley has an estimated net worth of $1.5 million.

Billy, 46, currently lives in Las Vegas with his wife Diana Tolley and their three kids.

Nicholas Groff was one of the lead investigators of the Paranormal Lockdown. He is a ghost investor as well as a former cameraman and co-host of the Travel Channel’s ‘Ghost Adventures.’ But how he gets into the show?

Groff graduated from the University of Nevada, Las Vegas, where he met his friend Aaron Goodwin. He told that when he was eight, he fell out in the yard of his family home in Salem, Hampshire, and was considered as a near-death experience. Two years later of the incident, Groff claimed that he saw a ghostly black figure in 2012 interviewed.

Before working in the television, he met Zak Bagans as a DJ for his wedding in Las Vegas. In 2004, he teamed up with Zak and Aaron for a show, Ghost Adventures’ and worked until 2014. Besides, he worked on various projects such as ‘Ghost Stalers,’ ‘Destination America,’ and ‘Ghosts of Shepherdstown.’

He earns quite an impressive worth from his various projects, including Ghost Adventures. Nick Groffs has summoned a net worth of $1 million, as of now. Additionally, he makes extra worth from his clothing line called ‘Phantom Collection’ as well as released an album ‘The Other Side.’

Nick Groff has been married to his wife Veronique since 2004 and shared two daughters. The family of four live outside of Boston, Massachusetts.

Cinematographer ad sound mixer Jay Wasley is famous for his work on Travel Channel’s ‘Ghost Adventures’ documentary series. He marked his filming career in Philadelphia, PA her he worked as an audio engineer and a director of photography.

Jay Wasley and his team investigated in several haunted places and homes and also admitted that they had several scary moments. As a kid, he interested in paranormal activity, and consequently, he read the myths and legends regarding the topics.

Jay has been actively working in the television for almost two decades. But what’s the figure of Jay’s net worth? As of the current writing, his net worth is still under the radar. However, we can be sure that he makes not less than a million.

Moving towards his personal life, Wasley is already taken, and currently, he in a relationship with a gorgeous lady. But he has not revealed her identity to the public. The interesting fact is, he is a pet lover.

Nick Groff is not working with the Ghost Adventures team anymore. He was the executive producer and the star of the program, Ghost Adventures. He was with the show until season 14 and didn’t return on the show for season 15.

There’s a lot of speculation as to why Nick departed from Ghost Adventures. Ultimately Goff left the show and attempted his own productions. However, longtime fans speculated that he left the show due to Zak’s ego. Yet, the actual reason has not officially disclosed to date.

Caption: Into a day of Nick Groff’s personal life

At the time, his co-star, Zak Bagans took to Twitter and stated, “someone, who fans are assuming is Nich Groff, to stop using Ghos Adventures n his “resume of achievements” and saying it’s deceptive because he was fired from the show.

After that, Nick helmed a new paranormal show ‘Ghost Stakers’ that featured actor ChadLinberg and John E.L. Tenney and David Rountree. The show ran for a single six episodes season.

Is Ghost Adventures Real Or Fake?

Ghost Adventures has been traveling globally to the world’s most haunted houses and ghost towns during season 16 and 17. The cast members of the show believe in ghosts and skeptics.

It is reported that who has been on the show for years have shared their experience with their self proclaimed paranormal investigators of the show. According to Arizona journalist Ozzy Mora’s word, while investigating Gila County Jail in Globe, AZ, surprised her in so many ways. She added nothing is scripted. They only shot between the crew and the person they are interacting during the investigation.

Ghost Adventures is one of the highest-rated paranormal shows on Travel Channel that produced by MY Entertainment and created by a paranormal investigator Zak Bagans. Well, we don’t think the show is canceled.

Th show is ready for season 20 that will premiere in 2020. They even announced the latest season arrival via Twitter. All-new ‘Ghost Adventures’ series will begin on Thursday, January 2nd, 2020, at 9|8c on Travel Channel.

In the new season, Zak Bagans, Jay Wasley, Aaron Goodwin, and Billy Tolley gather in their screening room and get about their iconic investigations. So guys, be ready for the new season.