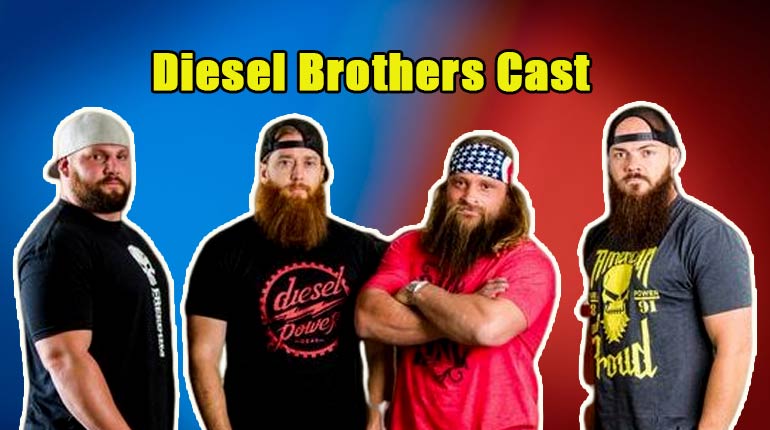 Nowadays, reality shows are watched from all around the world. Besides the music and dancing, there are other types of reality shows, such as “Diesel Brothers.” Diesel Brothers is an American reality show that premiered on Discovery Channel, on 4 January 2016. Now, the show is its Season 6 and that broadcast on December 9, 2019, at 8 PM ET/PT.

The show is about cars and motorbikes that are build by Heavy D, Diesel Dave, and their crew at DieselSellerz. The shows cast not only make heavy trucks but also show their crazy stunts. Diesel Brothers is one of the most-watched shows on the Discovery network since its premiere.

Diesel Brothers Casts: Who is in it? Let’s known more about the show’s casts, including their net worth.

Dave Spark is hailed from Salt Lake City and goes by the name Heavy D. Heavy D gained fame and fortune after appearing on Discovery’s show “Diesel Brothers.” Dave is an entrepreneur, custom vehicle builder, and reality star. Since he was a little boy, Dave has been fascinated with the engine.

When he was in high school, he spent most of the time studying auto mechanics, welding, and fabrication. After graduation, he worked at an ATV and motorbike along with his friend Rich Eggett.

Then, he joined at Wester State University but dropped out after one semester and started his own business at the age of 21. In 2008, Heavy D was hired by his castmate, “Diesel Dave,” Kiley, to help him run the equipment. He has been on the show since its beginning and makes a handful of salary from Diesel Brothers.

Like Heavy D, Diesel Dave has a passion for cars and motorcycles. Diesel Dave is the leading cast member of Diesel Brothers. Kiley met Heavy D at a church dating event that organized for singles. Heavy D invited Diesel Dave to the lake with friends in his pickup. He accepted the invitations and went to the event, driving his diesel trucks.

While driving to the lake, his friend Heavy Daccidently put gasoline in his new truck, and Kiley came to the rescue and helped him siphon the tank. Their love for diesel trucks brought them together and decided to start their own business called “DieselSellerz.”

Diesel Dave makes heavy trucks and bikes. He earns huge money by selling the vehicles and motorbikes as well as merchandise. Diesel Dave’s net worth is said to be $2 million. Moreover, th reality star makes a good fortune by selling the apparel of men and women, gears, and other accessories.

Diesel Dave is married to wife Susan and has two adorable children.

RedBeard was born and raised in the small town of Roosevelt, Utah. Money Man Josh Sturt met Heavy D several years ago before he became the part of DieselSeller. He helped to grow DieselSellers and turned into a multi-million-dollar business now.

Josh Stuart makes not less than a million from his profession. RedBeard’s has an estimated net worth of $1 million. However, his salary that he earns from the show is still under the radar.

RedBeard has been married to his wife for over a decade. Also, he has four kids. Josh hasn’t revealed the name of his wife publicly.

Keato Hoskins is also known as The Muscle and is a part of Diesel Brothers. The Muscle is the childhood friend of Diesel Dave and met him the first time when they were in 8th grade. He has been interested in automobiles from a young age.

Keato, born and grew up in Utah. He comes from a family of diesel fanatics. A few years ago, The Muscle met Heavy D and eventually decided to join Diesel Brothers. Besides, Hoskins has a passion for fitness and has been a trainer for more than 2,500 people. His one motto in life is, “you can do anything if you put your mind o it.”

His Instagram goes by @the.muscle, where he over 900k followers and posts numerous photos and videos of himself along with Diesel Brothers cast. The Muscle has a whopping net worth of $500,000, as of now.

Keato Hoskins was married to an unidentified ex-wife. Also, he co-parents with his ex-wife for their two beautiful daughters.

Diesel Brothers Cast Net Worth in a Table

Since it hasn’t even been that long since the premiere of this season, there is no way we have any information on the new season yet. However, we can be certain that a hit and unique show like Diesel Brothers will not be canceled without any fore notice. We are sure we will acquire all the info in the coming days. For more updates, keep visiting our page.