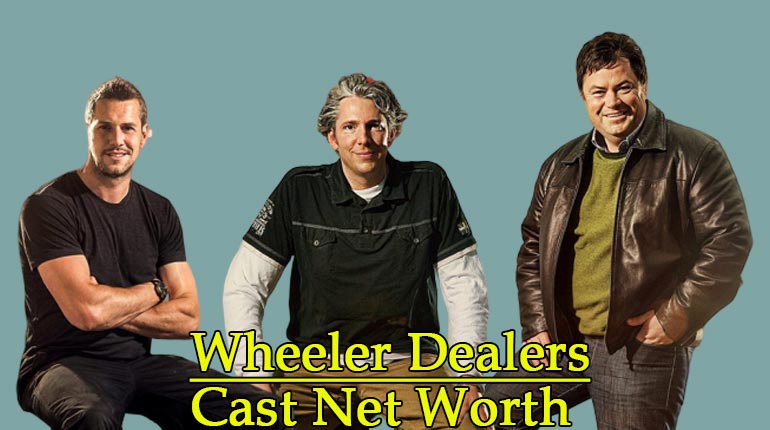 The reality television series Wheeler Dealers produced by Attaboy TV initially began airing from the UK Discovery Channel and then Motor Trend in the United States around the year 2003.

The show is emphasized on Mike Brewer, and Ant Anstead shares a mutual interest in motor vehicles where they jointly team up with other reconstruct faulty cars, on the verge to make some profits.

Wheeler Dealers officially founded and formulated by Daniel Allum and Michael wood which are the directors of Attaboy TV and compelling long-time automobile fanatics. So far the show is on its 15 series run.

Let’s learn about the incredible journey of these show cast members along with their net worth and wiki-bio facts. So stick with us!

Edd China came to this world on the date of May 9, 1971, which makes his age around 47 years as of 2019. Because of his great passion for a car mechanic, he studied a Bachelor’s degree in engineering product design at London South Bank University.

During his college years, he invented the casual Lofa(a driving sofa) for his school project. It’s an enormous success eventually landed him his first job on television in the year 1994.

As of now, Edd China is a British motor specialist, an inventor, and a TV host who has a hefty net worth amounting $3 million which he reportedly earned from his service as a co-host of Wheelers Dealers and Auto Traders.

Moving on to his love life, Edd China is a married guy who always flaunts his wife on his social media site. He exchanged his wedding vows with Imogen China.

Ant’s full name is Anthony Richard Anstead and was born on the date of March 28, 1979, in Plymouth, Devon, England. That makes him 40-years-old at the moment.

Ant Anstead is a British TV personality, TV-host presenter, motor specialist, a car developer, designer, and an artist. He is known for being the host of the English Channel 4 automotive program titled ‘For the Love of Cars’.

On Ant Anstead’s love life, he has been married twice in his life. The name of his first wife is Louise Anstead and was divorced by 2017. He then wedded an American Television personality, Christina El Moussa from the date of December 22, 2018.

From his aspiring career as a popular TV personality, Ant Anstead has a net worth which is projected around $100k.

Mike Brewer was born on the date of August 28, 1964, which makes his current age to be 54 years old. He is an English car trader and analyst who has a vast experience in car dealing.

He has made his appearances on many reality shows since the year 1997 like ‘Deal on Wheels’, ‘Driven’, ‘Pulling Power’, ‘Auto Trader’, and many more to name a few.

Moving on to his love life, Mike Brewer is a married man, and he is wedded to his longtime girlfriend-now-wife, Michelle Brewer for over sixteen years. The wonderful couple is blessed with a beautiful daughter named Chloe Brewer.

As of 2019, Mike Brewer has accumulated a hefty net worth of about $1.5 million.

Frank Stephenson was born on October 3, 1959, in Casablanca, Morocco. He was born to a Norweigan father who possessed American citizenship and a Spanish mother.

Frank is an American-British automobile designer who is best known for his innovative design works such as in Mini, Fiat, Alfa Romeo, Ferrari, and McLaren.

In the year 2008, the Autoblog named him “One of the most influential automotive designers of our generation”. Giving an insight into his love-life, Frank is married to Emily Loesser. As of 2019, Frank Stephenson has accumulated a hefty amount of net worth around $4 million.

Lyle Fisk grew up in Yuma, Fisk and now he is 79 years old. Apart from this, there is not much sufficient information about him on the internet. He must have accumulated a hefty amount of net worth from his amazing long career in the automobile industry.

There is no information on his love life, but his wife details are not accessible at the moment.

Edd China reportedly left the show where Mike Brewer got additional death threats which eventually made a significant controversy on the Wheeler Dealers show.

In the beginning, Edd China served as the show’s mechanic for 1 to 13 and later got replaced by Ant Anstead in the 14 series. The reality show is a fun and enticing one which involves bragging and repairing on automobiles to car enthusiasts.

Is Wheelers Dealers Canceled or Renewed for a New Series?

‘Wheelers Dealers’ is originally from the UK so they may like to do things a little differently. They have series instead of seasons and were recently though with their 17th season in October. It might be some time before we find out detail on whether ‘Wheelers Dealers’ is canceled or not.

However, we understand the unrest among the fans. The car-based show did take a year hiatus in 2018 and fans terribly missed it. But they must have only had some technical difficulties as they had two series simultaneously in 2019. So have faith in the and hopefully, we get to know new details on the premiere date and number of episodes for the new season very soon.