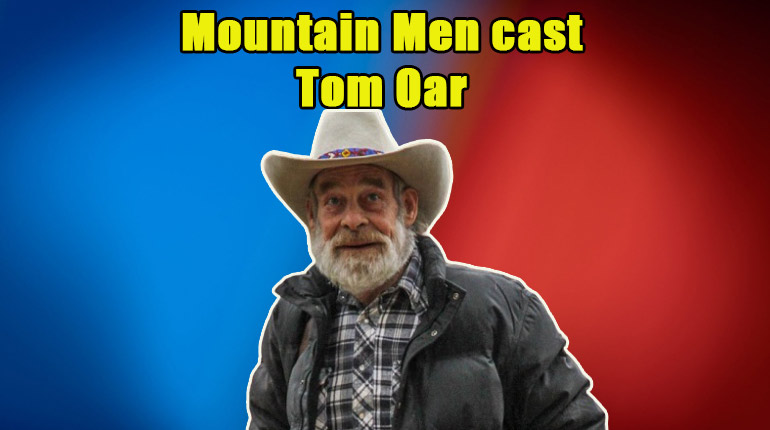 Get ready for yourself for another harsh winter on Mountain Men. The reality show, Mountain Men, airs on History Channel. It shows us different people living an adventurous life in remotes mountain terrains of the USA. The original member Tom Oar has managed to live off the grid near Yaak River in northwestern Montana along with his wife.

In this article, we discuss Tom Oar’s, who left modern life and moved to a remote area. What is Tom Oar doing right now? Is he still on the show? Read on to find out everything about Tom Oar.

Who is Tom Oar?

Tom Oar is the cast member of the History Network show, Mountain Men. Tom was born in 1943 in Illinois, USA, which makes his age 77. He holds an American nationality and belongs to the Caucasian origin.

Tom’s father, Chike Oar, was a performer and entertainer in the US Wild West shows. Tom has a brother named Jack, with whom he shares childhood memories. The information regarding his mother, early life, and education qualification is not available.

Tom Oar is a Cowboy Turned a Mountain Men

Oar left all forms of civilization behind and went to live in the jungle with his family. He settled in Montana wilderness; Tom squatted with some friends in Troy. Tom also spent half of his life rodeoing and 18 years with fierce bulls.

As a grown-up, Tom lives in the woods. In the 1970s, Tom and his wife, Nancy, moved to remote Montana and settled there. He has to travel about 50 miles just to get groceries. The couple goes hunting for food.

Tom Oar Works as a Trapper

Also, Tom is a trapper and taught himself tanning to support himself. His wife is worried about Tom, as he works in trap lines. His wife once said, wolves are becoming a big problem, and also, he’s not a young man anymore. Furthermore, his wife is very concerned about his health as well as her. When the snow in the mountains slowdown in the winter, it’s easy to trap the animals.

As for their occupation, Tom and Nancy make various kinds of shoes and clothing like moccasins, jackets, trousers, t-shirts from tanned deer skins.

Tom and his family have been living in the mountain terrains of Montana for more than three decades. The History Network asked him to be a part of Mountain Men. Oar joined the show during its premiere in 2012, and since then, he has been featured on the show.

The 77-year-old has decided to hang up his hunting traps. It is reported that Tom is living his retirement with his wife, Nancy, in Florida. Due to Mountain Men’s popularity, he lacks privacy. He told Allegheny Mountain Radio, they lived in the woods, four miles away from the British Columbia border, which is about fifteen miles east of the Idaho Panhandle.

He added, more than 300 people came to their house last summer and take pictures of the two and shake our hand. Two years ago, the couple had honeymooners. On the other hand, viewers asked if anything happened to Tom. Well, the white busky beard man is healthy and enjoying his life.

The generous white beard man is one of the original cast members of Mountain Men. Tom Oar has been on the show since the first season and still features on the show. However, there are rumors that Tom left the show and never returned. If you heard any kind of these rumors, then it is just a hoax.

In the recent episode from Season 9 ‘Turf War,’ Tom enlists help from his brother, Jack, to authentically craft a dugout canoe. Tom and Jack craft a $5,000 boat. See the below video.

Tom Oar Married to Nancy Oar For a Long Time

Tom and Nancy have always stayed together, no matter how tough the situations are. After marrying Nancy, the couple moved to northwestern Montana and have been living there for over thirty years. The two live a blissfully happy married life for decades.

If you watched the show, you have seen the couple that they’re so much in love with each other. Tom Oar has two children, a son named Chad Oar and a daughter, Keelie Oar.

But sadly, he lost his daughter, Keelie, at the age of 49 on April 26, 2015. However, his daughter’s cause of death is still under wrap. In addition, Tom has a grandson. Both of his children were born from his previous marriage to Jan Frazer. We don’t find the info about his ex-wife. Furthermore, Tom and Nancy have no children together. The couple lives together and collects their food from mother nature.

The white beard man makes pretty good money from his pay packet role in Mountain Men. As of 2020, Tom Oar’s estimated net worth is about $400,000. Tom Oar has made most of his wealth from his career as a tanner, rodeo star as well as television. In addition, he makes extra worth by selling their handmade products.

How Tall is Tom Oar?

The white beard man stands at a tall height of 6 feet and weighs around 80 kg. He has proper height and weight that enable him to hold the intricacies of sharing neighborhoods with savages.

Apart, the reality star has a well-trimmed body and has maintained well even into his old. He dresses like a cowboy and completes the overall look with a hat.

Most of his followers search his name on social media to get updates about it. Well, let you know that Tom Oar is not active on any social media. The exciting fact of Tom Oar is, in the beginning, he started brain tanning as a hobby, which he turned out to be a profession.

Watch the new season of Mountain Men on History Channel to know more about Tom Oar.