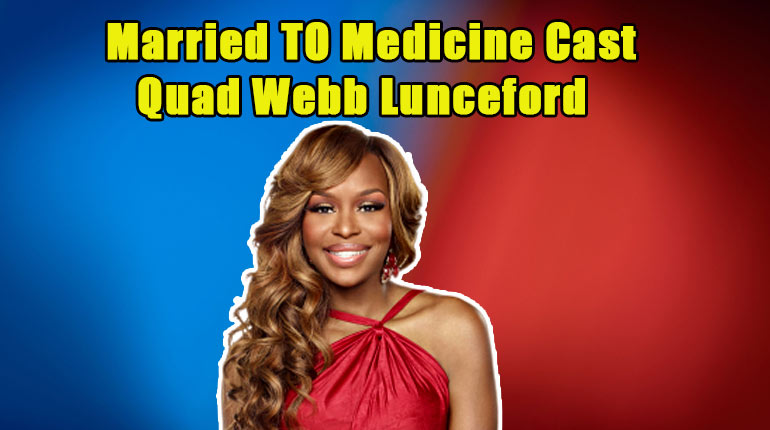 Webb made headlines during the past seasons of Married to Medicine because of her strained relationship with her husband. As a result, Quad Webb and the estranged husband departed their ways in 2019.

Fans have a question on their mind that is she dating someone or not. The answer to this question, in short, is no. Then what is she doing?

Why Did Quad Webb Lunceford and Dr. Gregory Lunceford Divorce?

Quad Webb and Dr. Gegory are no more a couple. The former Medical Sales representative was married to ex-husband, Dr. Gregory Lunceford, for six years. In season five of Married to Medicine, the conflict started in their marriage that led to divorce.

During the season five reunion, Quad Webb’s former husband went to a hotel with two women but claimed nothing happened. One of the ladies named Jackie Presley told All About The Tea that Dr. Gregory was single. Further, the Atlanta native clarified that she didn’t try to extort Dr. G.

On May 1, 2018, Quad filed a divorce against her husband. For some time, the couple tried to work things out and even for counseling but failed. Reportedly, the cause of their separation was, Dr. Gregory gave work as his priority and making her the second.

After a long year of long legal issue, Quad Webb and Dr. G finalized their divorce in mid-2019 and closed the chapter of their relationship forever.

According to Bravo, Quad goes back to her maiden name of Quad Webb. As well, her current relationship status is single and not dating anyone else. Married to medicine star already used Quad Webb as her pen name on her cookbook titled “Cooking with Miss Quad: Live, Laugh, Love, and Eat.”

Miss Quad is a brand contributor to BCBG. She is not only known for her martial tips and making healthy meals but also for famous for fashion sense. She is so obsessed with fashion and even attended New York Fashion Week.

Additionally, she became a contributor to the fashion house BCBG Maz Azria. BCBG stands for “Bon Chic Bon Genre,” which is the French language. It means “good style, good class.”

How Much Does Miss Quad Earn from Married to Medicine?

Miss Quad Webb earns thousands of dollars per episode from Married to Medicine. Webb’s estimated salary is around $200,000 and which means she makes not less than a million per season.

Moreover, the net worth of Quad is increasing every year. In 2020, Miss Webb’s net worth is said to be around $2 million. On the other hand, her castmates, Toya Bush-Harris‘ salary is about $395,000, whereas Heavenly Kimes’ estimated salary is $160,000.

Webb is a Chef & Author

In addition to her TV Career, Quad Webb is a chef. For her, cooking is a pleasure and a respite. She loves food and shares her recipes with her fans through her YouTube Channel and Instagram.

Quad learned cooking from her mother since she was a child. She also shares the tips for beginners and has updated southern classics such as Jalapeno Cheese Hushpuppies, Cajun Deviled Eggs, Peach, Fig, and Arugula Salad and more.

Furthermore, Webb has her own official cooking website where she posts her recipes. Also, the Married to Medicine star authored a cookbook titled “Cooking with Miss Quab Webb: Live, Laugh, Love and Eat.” You can get the book on Amazon.

Quad Webb Has a Clothing Line for Pups

Quad Webb has a good knowledge of fashion. She accommodates both modern and practicality style. Married to Medicine star launched a luxury clothing and accessory for dogs called “Picture Perfect Pup.” It was established in 2014, where you get everything for puppies, including custom pieces that have never seen before.

She is a Pet Lover

The ex-wife of Dr. G, Webb, loves dogs. She even has two posh dogs named Khloe and Kar’rie. She believes that pets are the extension of a family and should be treated as a family.

The multi-talented lady maintained her figure despite the busy schedule. She manages time for the gym and eats healthily. As a chef, she cooks delicious healthy meals.

She is never shy when flaunting her curves in a swimsuit. On January 6, 2020, Black Barbie posed in one piece of neon swimsuit and also wore matching sunglasses.

Scroll down to see the Atlanta beauty.