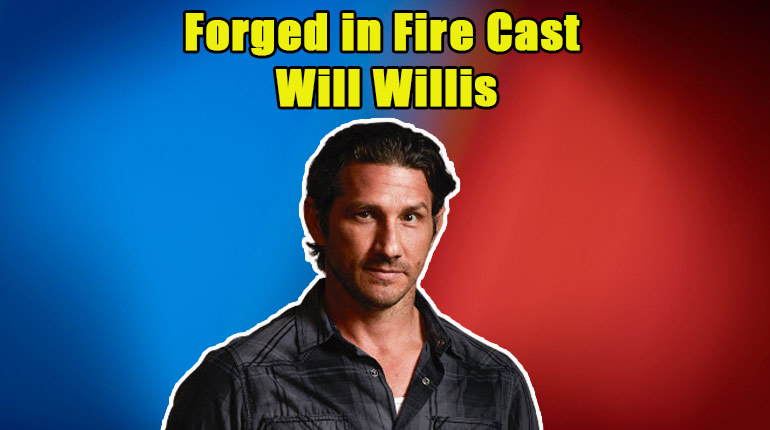 It is the bitter truth that a lot of people we see in films and TV get there without any hard-work or talent. However, as connoisseurs of the Entertainment industry, we would say that statement pertains to only a small population of celebrities.

There are tons of people who belong where they are now like Will Willis. Will Willis is the host of hit reality series ‘Forged in Fire‘ as well as star of several other exciting TV series.

Today we explore who Will Willis is by going in-depth of his net worth and married life. Get to know all of him through his biography.

Will Willis is a Military Brat

Will Willis was born on Valentine’s day or February 14 of 1975. Willis was strangely born in Portugal because his father, Jakob Willis, was in the army working in the country. We all know how the military profession runs in the family. So, Will Willis always was wanting to join the army as well, finally following his dream as soon as his graduation from high school.

We do not know Willis’s father, Jakob Willis’s military record, in detail, but it would be safe to say that his son probably outshone his father’s service. Will Willis joined the 3rd Ranger Battalion of the 75th Ranger Regiment in 1993. It was right after his high school graduation and around two years after his dad’s retirement from the army.

He would serve in the regiment for well over four years before deciding to change his focus towards the Air Force. It did not even take a month for him to become a Pararescueman; in the same month, he quit his regiment in June 1998. In his new role, Willis would take part is a series of an extensive search, rescue, and recovery missions, which would consist of tasks as unique as safe retrieval of NASA astronauts after landing.

Caption: Will Willis introduces himself and his military career

He was with the Air Force for a good ten years until 2008. He left the military institution in March 2007 but kept doing reserve works under USAF until 2008. In the end, Will Willis left his military days behind, but you can count him not forget his former Army Ranger, Air Force Pararescueman, and Tactical Emergency Trauma Specialist ways.

Will Willis’s Deserving Net Worth from his TV Career.

Many of you may be wondering, “Fine, Will Willis was a great soldier, but how is he capable of hosting a show about bladesmith?” The answer is simple. Will’s time in the military and Air Force has made him a superb Tactician of all kinds of weapons from simplistic blades to military-grade weaponry. Furthermore, he is not a judge, so; he doesn’t have to be an expert bladesmith anyway.

Furthermore, since joining the ‘Forged in Fire’ cast, Willis has newfound respect and love for the art of bladesmith. He even is training and educating himself to be able to smith a knife now and then. The show also released a video of Willis learning to forge a blade with ‘Forged in Fire’ judge and friend, J. Neil, with another judge, Doug Marcaida.

Caption: Will Willis learning to forge a blade from J. Neil with Doug Marcaida

So, Will Willis more than belongs to be the host of ‘Forged in Fire.’ Furthermore, he was also the star of the war stimulation show ‘Special Ops Mission,’ where he would try to perform special missions against other army and military groups in 2009. He was also hot of the 2011 TV series ‘Triggers: Weapons That Changed the World.’

Now that we have all of that info on his career, both military and TV, we can finally get to assessing the 45-year-old’s net worth. Putting it all together, we can assume Will Willis’s net worth to be around $500,000 in 2019. His net worth for 2020 is still under review, but we will have it for you shortly.

Will Willis is Happily Married to his Soulmate

Will Willis always has that charming smile on his face for a reason. He couldn’t be any happier with his current wife. Will Willis married the woman of his dreams in the form of his wife, Krystle Amina, on October 11, 2017. They got engaged earlier that year on March 24, 2017. The story of how they met is still a mystery, but we can fill in the blanks a little.

We mean from what little we know of Willis’s wife, she is incredible. She loves to skate and do archery. She also seems to know her way around cars and may also be a mechanic, according to her husband. However, it doesn’t matter much since the two are obviously head over heels in love. They had a child together recently on March 7, 2020. They named their son Flash Orion Walls, and now the family looks to be picture perfect.

Will Willis is a Father to Three Children

Will Willis is now the father of three children altogether. Along with Flash, he also has two full-grown sons. We believe his older sons are the product of a past marriage. His oldest son’s name is Caleb Willis, who was born on February 23, 1998. He is 22 years old and since more than one year ago has been living by himself, independently by working two separate jobs, and his dad couldn’t be prouder.

Similarly, his other son’s name is Jacob Willis. Jacob was born on January 15, 2001, which makes him 19 years old in 2020. He graduated from high school last year, where he was a star football player, but he also had an accident where he broke his collarbone and is currently recovering. We hope he gets well soon. That is all the data we have on Will Willis for now.