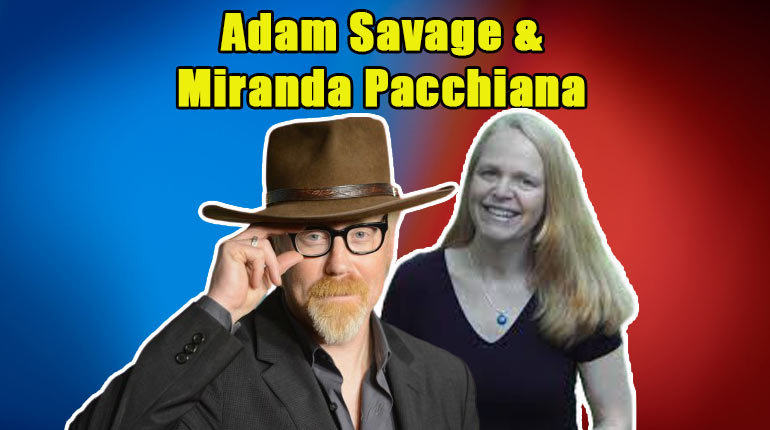 The infamous “Me Too” movement might seem like it has died down, but in reality, it has created a tidal wave of women speaking out against sexual misconduct from men in high places. More recently, another public figure was brought out in the open with accusations of sexual abuse, and it was Adam Savage from ‘Mythbusters.’

Adam Savage stands accused of sexual abuse by his own sister, Miranda Pacchiana. Who is Miranda Pacchiana? Find out through her bio, and do not forget to learn everything about why she is abusing her brother of sexual misconduct. Also, check out her married life, husband, children, and more in this article.

Miranda Pacchiana is suing her brother, Adam Savage, for sexually exploiting her from years ago when both of them were children.

“Beginning in or about 1976 and continuing until approximately 1979, Adam Savage, would repeatedly rape Miranda Pacchiana and force oral sex upon her, and forced Miranda to perform oral sex on him, along with other forms of sexual abuse,” reads Miranda’s lawsuit filed in Westchester Supreme Court.

According to the suit, Savage would be just around 9 to 12 years old around the time when he would show such aggressive, lewd behavior towards his sister, who would be about 7 to 10 years old. Furthermore, the ‘Mythbusters’ anchor will call himself ‘The Raping Blob’ as if his deviant actions were a game to him.

Pacchiana’s lawyer, Jordan Merson gave a public statement; “he prolific abuse by Mr. Savage as alleged in the Complaint has caused irreparable damage to my client that she will live with for the rest of her life. Today is the first step in the direction of healing and justice.”

On the contrary, Adam Savage’s lawyer also read his statement on his behalf, which were consisting of a lot of passive-aggressive comments about his sister. Adam, through his statement, informs us that his sister suffers from severe mental problems and has been spreading false and heinous stories about him for financial extortion.

Miranda Pacchiana is Going Against Her Family

One thing Adam Savage said that is true is that this is not the first time Miranda Pacchiana has come out with such allegations too. She came out a few years ago to her family, but instead of support and sympathy, all she got was disdain. Miranda is currently a writer and social worker, working towards the same problem that haunts her.

She currently runs a blog, ‘The Second Wound,’ where she explains her own experience about how instead of being by her side, her family found her at fault for not trying to hide the abuse and not her brother. Regardless, she is standing her ground as she takes the matter to court.

Even their mother, Karen Savage, has publicly taken her brother’s side of the matter.

“It makes me very sad to say this, but my daughter suffers from severe mental health challenges, and it’s devastating that she’s putting Adam and our entire family through this. Adam is a good man, and I support him completely.”

Thus, we will have to wait to find how this plays out in court and until then, this is all we know.

Miranda Pacchiana’s biography is a matter of utmost secrecy. She only came to the limelight after she dropped a lawsuit on her brother for sexual assault. Before that, she was pretty much invisible to the public. Miranda was born in 1969 to filmmaker father Whitney Lee Savage and psychotherapist mother, Karen Savage.

The 51-year-old is the youngest among her six siblings, with her youngest older sibling brother being Adam Savage. One of her other siblings is Kate Savage, who is also an artist. She was around 7 to 8 years old when, according to her, her brother would rape and sexually abuse her.

Miranda Pacchiana’s Husband & Children are Supportive of Her

There is really not much to go on about her marriage and family life. However, we are sure that she is a married woman as she has said that herself in her website’s home page. Furthermore, we know that she currently lives in Connecticut with her family.

She also thanked her husband and children for their undying support, especially in combating her tragic history. We also know that her eldest child is a daughter who is already a college grad from one of her articles in ‘My Second Wound.’

We also lost any chances of getting information about her since she has no social media whatsoever. Well, to be more accurate for some reason, all her social media has recently been removed, or something as all of them display an error message that they are not available at the moment.

We found this common in her Facebook, Twitter, and even LinkedIn pages. So, sorry, but really there is no way to get much more info on her background.

We have no idea or information about her net worth, but she must surely make a decent living from her career as a writer, social worker, and survivor. Furthermore, her articles have also been a feature of prominent publications like ‘The Huffington Post,’ The Mighty,’ ‘MomsRising’ and ‘Trigger Points Anthology.’ Despite not knowing her net worth, we shouldn’t undermine the sum just yet.

Adam Savage was born in the concrete jungle that is New York City, New York, on July 15, 1967. Since his childhood, Savage was invested in becoming an actor, even taking five years of acting school. He also was part of voicing and appearing in Sesame Street, where his father was an animator, filmmaker, and painter. Adam Savage gave up on the dream of being an actor at the age of 19.

Adam Savage is most famous for being one of the main casts of ‘Mythbusters’ from its inception in 2003 to its initial cancellation in 2016. However, he was also part of a creative department like the model maker or special effects in action sci-fi movies like ‘Galaxy Quest,’ ‘Bicentennial Man,’ ‘Star Wars: Episode II – Attack of the Clones’ and ‘The Matrix Reloaded.’

Adam Savage’s net worth through his wholesome career is around $8 million. Savage is married to wife Julia Ward of almost 16 years after getting married on September 11, 2004. They have a pair of twin sons for children.