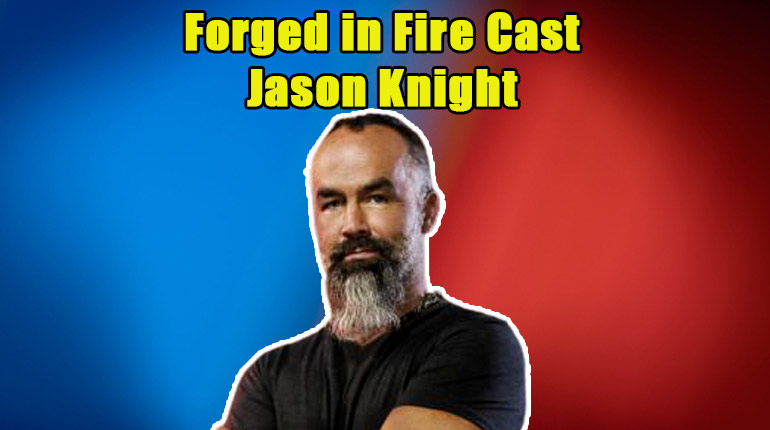 Not all TV stars are beloved by the viewers. Luckily, they have a long time through the course that the show or series runs to win over the hearts. Unfortunately, some people only get one chance or one season, which is why we have the utmost respect for the TV personalities that become an instant hit with the public. We are talking about people like Jason Knight.

Some of you may remember him vaguely for his brief time as the judge of the History reality series ‘Forged in Fire.’ However, after 1 season, he took his leave. Find out what he is up to nowadays. Also, find out Jason Knight’s net worth and married life from his complete biography before you;

For Jason Knight, his fascination with knives began as early as his childhood. His father would read him Edgar Rice Borough’s stories, and his mother will design him likewise costumes. He took old knives and machetes lying around his house and went off to an imaginary adventure hacking through the forest on his backyard.

Knight was born and brought up in Charleston, South Carolina, with wetland forests from the Four Holes Swamp ran right through his hometown. His father’s stories, mother’s costumes, and primeval forest in his backyard were the perfect cultivating ground for Knight’s Tarzan-like world. It would later transpire in his drive to become a knife-maker in his youth.

Knight’s parents were supportive enough to buy him a Grinder, his first equipment. It was around this time he began going to Southeastern Wildlife Exposition every February as well. There he met blade enthusiasts from all around the world and even became good friends with professional bladesmiths like George Herron and Daniel Winkler, the latter of who was a Master Bladesmith.

Back then, he would show-off his earlier works in effigies and walking sticks for criticism. He would likewise, show his work in Native American Pow-wows where he got a lot of good reactions. It got him appreciating the historically-influenced art of his heroes, Karen Shook and Daniel Winkler, and form a friendship with them.

Since then, he devoted himself to their guidance, but he also learns from every other innovative and prolific knife-makers in the industry.

Jason Knight is Married Longtime to his Wife, Shelly

Jason Knight is married to his longtime wife, Shelly Knight. Nothing else except her wife’s name is revealed to the media. However, we know that he was married for a long time because he was with her before the start of his career.

Knight and his wife saw the movie, ‘The Last of the Mohicans‘ in 1992, and the knives and axes were the props that were designed by Daniel Winkler. It was then that Knight thought that he too could make a career in knife-making and not just as a hobby.

Now with complete determination, he became a student at the Bill Moran School of Bladesmithing in 2001. There, he would train under Master Bladesmith Jay Hendrickson, and the same year of his enrollment even won the Blade Show West’s Best New Maker.

He would go on to win many awards along the way, but probably his most exceptional awards and recognition came in 2007. It was the year he not only got recognized as American Bladesmith’s Society’s Mastersmith while also simultaneously winning the BR Hughes award. He also is the recipient of the Knife Collaboration award in 2017.

Jason Knight would finally join his longtime friend and mentor’s business, Winkler Knives Team, in 2017 as a consultant and designer. He also works on his own company, Knight Forge, where on top of crafting blades, he also gives out online classes on knife-making. After learning all this, it goes without saying that Jason Knight’s net worth is undoubtedly massive after that impressive career.

However, we can’t underestimate the effect a TV career can have on one’s net worth and earnings. Jason Knight became a household name after appearing in season 3 of ‘Forged in Fire.’ Knight was temporarily replacing the show’s original hot and fellow Master bladesmith, J. Neilson, who was having surgery to treat his arm injury.

It is not an easy task to please the viewers who were already familiar with J. Neilson for the past two seasons. However, Knight was charismatic enough to easily make fans love him. He was a great judge at the show and thus must have made an equal salary. He never did return to Forged in Fire after season 3 as Ben Abbott filled Neilson’s role temporarily in season 4.

Where is Jason Knight? -with his family

We have already said that Jason Knight is a married man. Well, he is also a family man. With longtime wife, Shelly, he also has two children in his small and wholesome family. We at least knew the name of his wife, but as for his children, their identities remain anonymous. All we know his that he lives happily with his family; comprising of his wife and children in East Tennessee.