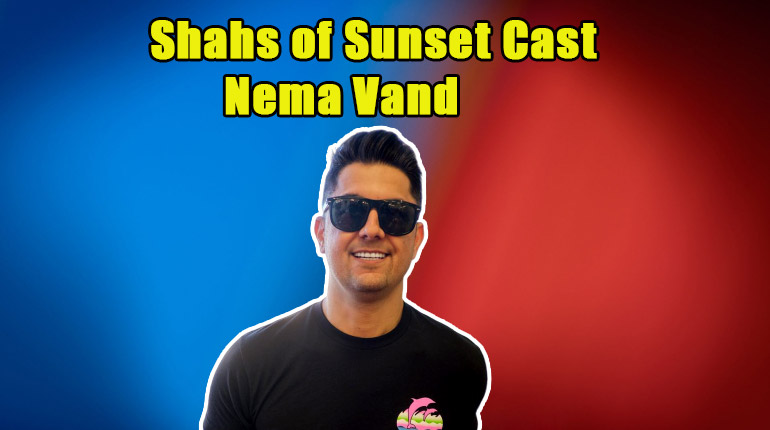 The Shahs from ‘Shahs of Sunset’ may be wealthy and successful when it comes to their career and net worth, but they still have a long way to go when it comes to maintaining their relationships. Nema Vand certainly tops up the list among his entire fellow ‘Shahs of Sunset‘ cast. Let us take a look back into his tumultuous relationships, whether it is his dating life or married life.

Let us see Nema Vand’s dating history currently with his girlfriend and ex-girlfriend list. Also, find out all about Nema Vand’s net worth & bio.

Nema Vand, despite a newbie among his Persian-American socialite friends, is a high-roller when it comes to his career. He became part of the series only from 2018, which was only last season. So, Nema Vand’s salary from the reality show, no matter how impressive it may be, is still only recent. He made much of it from his career outside reality TV, so it needs to be given more priority when discussing Nema Vand’s net worth.

Nema Vand’s net worth is estimated to be approximately $500,000 in 2018. As of 2020, it could have grown into as much as $800,000 to even $1 million. Nema main source of income can be considered his job as the president of Extras on Avail. It is like a casting company that hires and provides actors for various productions.

They are not a plain-simple casting company as they offer a personal touch for seeing their actors’ work from start to finish. It is proven through their high Yelp ratings and their track record of providing man extras too small projects like a TV commercial to big ones like short

His net worth also has contributions from other prospects like as a producer for the 2015 short film ‘The Scarecrow’ and his sister’s show ‘Dr. Mona Vand: The Modern Pharmacist.’ With Nema Vand’s salary from so many sources, the estimation of his $1 million does not seem very much out of bounds.

We were not counting on a youngster like Nema Vand to be a married man in his past, but we came to find it out shockingly that he indeed was. The bombshell was revealed on-air, so most fans of ‘Shahs of Sunset’ already know this. We still are left to our imagination on the details, but apparently, he got married young, at the age of just 18 years, and the marriage came to an end, with a divorce in 2015.

Caption: Nema Vand talks about his married life and divorce

This would not be the end of Vand’s unfruitful love life, as just a year after the divorce, he began dating Erica Saunders. Erica Saunders was his assistant and a good friend whom he knew since 2010. Their relationship was going pretty well in 2018 until Saunders got a job opportunity to work abroad in Barcelona, Spain.

The opportunity was too good for Saunders to pass up, especially when she saw no future with her boyfriend, Nema Vand. Nema, unfortunately, felt opposite with even hopes of one day making Erica, his wife. However, Erica took the job at the company in Spain.

Erica would eventually return, and they would continue their relationship despite not addressing the apparent problems. Nema would only complicate things to further degree when he almost kissed co-star Golnesa “GG” Gharachedaghi back in 2018. He would make this reveal to his then-girlfriend, Erica, and things turned out just as well as you would expect them to.

They went on a break, and we know just how well breaks turn out. We could say they are broken-up already, but Nema Vend is still not ready to let go of his feeling to a former girlfriend, Erica Saunders. He once again had the talk with Erica expressing his feelings. He makes logical points even stating;

We do not know what to think of this, nor do we know who we are supporting in this complex issue. Vand even took the drama to IG posting a photo of him and ex-girlfriend, Erica, with warm words towards her.

You, along with us, will have to tune into ‘Shahs of Sunset’s newest season to learn what happens next. However, things don’t look well for him as we couldn’t help but think Erica in an encrypted way was addressing her former boyfriend when posting this photo with the caption;

– displaying herself enjoying the single life.

Nema Vand is an Executive born on June 4, 1988, in Los Angeles, California. He was born and raised in the USA, so he calls himself white-washed Persian, despite his Persian ethnicity. Nema has opened up in the past about difficulties of growing up without a mother, but details on his parents are not up for public knowledge.

Nema has a sister, Dr. Mona Vand, who is his co-star in ‘Shahs of Sunset.’ There is not much age difference between him and his sister, and they get along famously. They get along quite a lot, which you would know if you follow him on his Instagram page.

Caption: Nema Vand and his sister Mona talk about their close relationship

It is not unlikely for people to confuse them as a couple. Even their co-stars and friends have pointed out the fact of how abnormally close they are as siblings. Maybe it is the rest of the world that has a love-hate relationship with their siblings that makes us think they are too close. Aren’t brothers and sisters supposed to be close? We leave you with this much info on Nema Vand. We hope you had a good read.