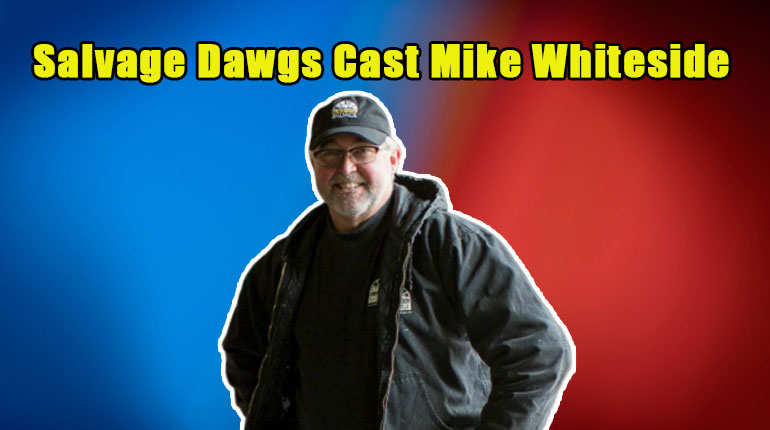 Being a popular television personality and having your own business takes a lot of effort and dedication in the industry. Some people have handled this pressure exceptionally well, while some have failed to do so.

Mike Whiteside is a famous treasure hunter, just like his partner Robert Kulp. They are the co-founders of the company named Black Dog Salvage. Also, they are well known in the television industry and are the two significant casts of a reality series called Salvage Dawgs.

This article is all about Mike Whiteside’s personal life, his marriage with Susie Farriss, and his two children. Also, find out about everything about his incredible journey so far.

Who Is Mike Whiteside?

Mike Whiteside was born in North Carolina. However, the actual birth date of the former sailor is under wraps. He belongs to white ethnicity while having an American nationality.

He was born to Irene Whiteside (mother), who ones appeared in Salvage Dawgs in 2017. Also, the details about his father remains a mystery.

Mike Whiteside Journey From Being Navy To Captain Of Coast Guard

Mike Whiteside got enlisted in the Navy at the age of 19. In 1976, he was a Naval officer right after he received his graduation from high school.

He served in Lakehurst, New Jersey, where he served as a parachute rigger. Furthermore,  he served the navy for almost four long years. In 1980, Whiteside became a petty officer second class.

After that, he moved to Colorado and followed his passion for skiing. Later, he moved back to the sea, working as a deckhand.

Likewise, Mike worked as a captain in the seas for 15 long years. He also had a Coast Guard license. While sailing out in the rough seas, he explored and traveled around the world.

After all these years, he finally moved on to be the co-founder of Black Dog Salvage along-side Robert.

As we know, Mike Whiteside had numerous other jobs before starting his own business. Before being a television personality, he was the co-founder of Black Dog Salvage in 1999.

The company focused on the extraction of historical and architectural artifacts in old houses. Mike and Robert buy the buildings, and they recycle the things that can be used.

After upgrading the merchandise, they sell it at a considerable profit. Now, the company has over 30 employees who also include their family members.

Besides, the company has four iconic black dogs, an exclusive television series, and one furniture line over these two decades.

Salvage Dawgs is running in the 11th season as of 2020, and the entire show revolves around the jobs of the company. Robert and Mike are the major casts of this show for a long time.

Mike Whiteside married Susie Farriss back in the mid-80s. The couple is together ever since. The actual detail about their wedding is still a secret.

Talking about Susie, she grew up in Roanoke as well. She had a shop near Franklin Riad, where she used to sell custom window cornices.

Mike and Susie met at the shop, and they fell in love together. Besides, the couple dated for a while before exchanging their vows.

Also, she is the only reason why Mike settled down in his home town. Susie has a significant role to play in his decision to leave his life of a sailor and established a company of their own.

The couple has two children. They have a son named Tay Whiteside and a daughter named Gracie Whiteside.

Mike’s daughter studies at Virginia Commonwealth University, pursuing her profession in Arts. She is also passionate about the family business turning to a television scene.

She is a sculptor, glassblower, and installation artist.

On the other hand, Mike’s son is also a famous television personality, just like him. Tay also appears on Salvage Dawgs along with his dad. He completed his Bachelor’s degree in Mechanical Engineering at Virginia Western Community College.

How Much Does Mike Whiteside Make From Salvage Dawgs

Mike Whiteside has gathered an enormous fortune over the years. His primary source of income includes his appearance in the television series, Salvage Dawgs.

Also, he has acquired a hefty amount of riches from Black Dog Salvage. So, Mike’s net worth is an outstanding figure of $1 million as of 2020. Meanwhile, he has established his furniture line, which adds up to his fortune even more.

We hope we were able to answer all your queries about Mike Whiteside plus, some more details.