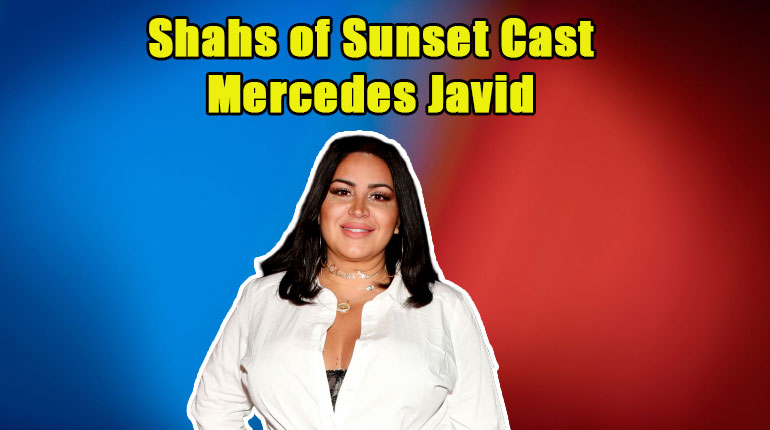 So, if you are watching season 8 of Shahs of Sunset on Bravo TV, then there are lots of things going on the show. In the new season, Reza heard the rumors that his husband is cheating on his. On the other hand, Mercedes Javid and Reza Farahan’s 30 years old friendship started to crumble.

Additionally, MJ is enjoying her motherhood, and Reza got tree years three years restraining against MJ’s husband Tommy Feight trashes his yard. Here are the facts you need to know everything about the Shahs of Sunset cast Mercedes Javid.

Mercedes Javid, aka MJ and Tommy Feight, tied the knot on April 21, 2018, in the Season 7 finale of Shahs of Sunset. On her wedding day, MJ wore a sexy see-through mermaid white gown designed by Pedram Couture. She looked stunning and flaunted her curvy body on that wedding gown.

The pair have been married for well over two years, and still, there’s no rumor of having extramarital affair and separation. She met Tommy through a dating app, Tinder, that helped millions of people around the world to find love. After dating for years, her now-husband, Tommy, went down on one keen with a diamond-shaped cushion cut gorgeous ring.

Following the marriage, Mercedes got pregnant with her first child after undergoing in vitro fertilization (IVF). She and her husband blessed with a baby boy on April 17, 2019, and they named their child, Shams Francis Javid, after her late father, who passed away in late 2018.

Now, MJ’s son is a little over one year old. Shahs of Sunset star Mercedes revealed that her son, Shams, has spoken his first word. You might be curious to know what it says.

Javid told E! News, Shams spoke his first word, “mama.” She gushed, her husband got jealous when their son says in front of him. The 48 years old star is enjoying her motherhood and spending most of her time with her baby.

In addition, Shams has his own Instagram under the name “@shamsfrancis” that managed by his parents. In the below post, Shams’ grandma, Darth Vida, is taking a picture with her.

Mercedes Javid is No More Friend with Reza Farahan

Shahs of Sunset cast members; Mercedes and Reza Farahan broke their 30-year-old friendship. The new mom of baby boy Shams talked about her one-sided Reza’s feud. The two long time friends are not interested in repairing their relationship, but why?

Reza claimed that MJ had been accused of spreading the cheating rumors about his husband, Adam Neely. Farahan heard the rumored from his castmates; Destiny Rose and Mike Shouhed. Rose told Reza that Adam hosted strip Jenga games in Reza’s absence.

Additionally, Rose heard her friend Ali Ashouri that Reza’s husband sent inappropriate text and nude photos to him while he was out of town. Farahan met Ali to find out the thing about the rumors. Ali referred to the name of MJ, who told him that Reza and Adam’s relationship weren’t going well.

After Reza found it was Javid who has been spreading the rumors and unfortunately, they broke their friendship. The insider reported that Farahan didn’t visit Javid when she was admitted to the hospital during her pregnancy. Also, Reza blocked on social media when she tried to contact him. Now, the best friends are not in contact with each other.

Reza Got 3 Years Restraining Order Against Her husband.

MJ’s husband, Tommy, has to keep a distance from Farahan for three years. One hundred yards is the specific distance that Tommy has to stay away from his home, job, vehicle, and his husband, Adam.

The order comes after Tommy invaded Reza’s property and wound up breaking one of the planters in his backyard. Also, Reza said that Feight called and threatened to kill him by phone. Also, MJ’s husband was sentenced to LA County jail for ten days and faced three years of probation after his release.

The Shahs of Sunset star shared a nude photo of herself from behind on Instagram and revealed she lost 15 pounds. MJ was baring it all the name of self-confidence. She captioned the photo,

“TransformationTuesday Today more than ever we WOMEN are standing up to repressive, archaic ideologies. We are learning to make decisions regardless of judgement by other or prejudices of age, shape and origin.”

After losing the weight, she flaunts her curvy body in her stunning white wedding gown. She went to the gym and ate healthy food. Aside from she did extra activities that include hiking, walking uphill, and the stairs machine.

Further, she also shared another nude picture of her on social profile in January 2018 and captioned it, “homepage every gal can & should have photoshoots to celebrated herself.”

Mercedes Javid is a Realtor

Mercedes Javid is a real estate agent. After appearing on the television, Javid’s lie has changed a lot over the last few years. She earns an impressive salary from Bravo’s Shahs of Sunset. According to Celebrity Net Worth, Mercedes Javid’s estimated net worth is $5 million.

A large swath of this income seemingly comes from her profession as a real estate agent. Additionally, she makes thousands of dollars salary from the Shahs of Sunset. However, the actual salary of MJ is still under the radar.

Besides, MJ is an entrepreneur. She has launched the fall collection of her dog accessories line called ‘Pablo’s Paws‘ that named after her beloved Chihuahua.

Mercedes Javid  is an Animal Lover

Javid loves animals so much, especially dogs. She has two dogs, Chihuahua Pablo and Julio.

Furthermore, her dogs have their own wardrobe. She shares numerous pictures of her pet on her social accounts. Also, the dogs have their’s private Instagram account under the name “@pabloandjulio.”

Mercedes Javid is Hailed From Iran

Mercedes Christine Javid is better known as beauty boss, was on August 12, 1972, in Tehran, Iran. She is the daughter of Vida and late father, Shams Javid. When she was a kid, her parents moved to the US and grew up in Los Angeles.

Javid earned a BA in Englis Literature from Cal State University Northridge in 2002. After two years, she was convicted of bank fraud in 1994.

Mercedes’ Relationship with her Parents

Javid’s parents separated when she was young but still lived in the same house because they didn’t want to ruin her childhood. While growing up, she became closer to her father than her mother.

As you often see on the show, Mercedes and her mother, Vida, have a rocky relationship. Vida always critiqued her weight and lifestyle. MJ’s mom didn’t approve of the marriage of her and Tommy Feight.

When the reality star’s father, Shams, suffered from a stroke, she took care of him as a caregiver. Javid announced the death of her father on May 18, 2018, via her Instagram profile.

According to the NY Times, her late father, Shams Javid, came to the United States in 1963 and got the citizen in 1970. Shams worked as a purchasing officer at Iran’s Embassy and later became an immigration consultant.

Mercedes is Active on Social Media

MJ told Andy Cohen that she doesn’t consider herself a celebrity. Besides her television career, MJ is a social influencer. She does have an account under the name, “@mercedesjavid” on Instagram, Twitter as well as Facebook.