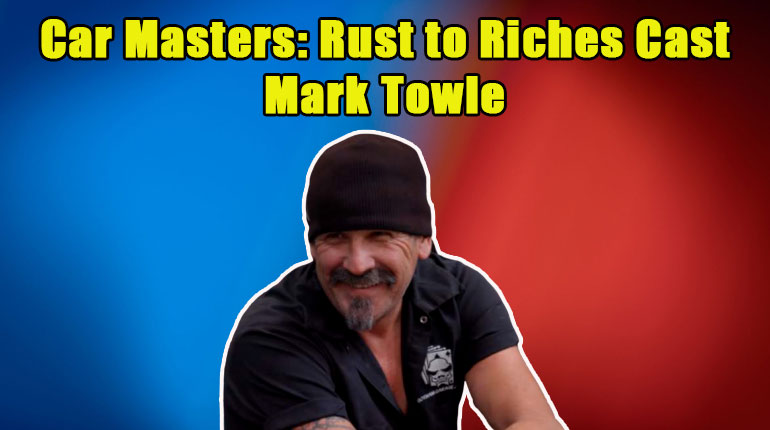 William Blake once said, “What is now proved was once an imagination.” Mark Towle may not be a poet like William Blake, but he certainly lives up to his beliefs on imagination. Towle is actually a car builder and fabricator who has his own similar quote, “If You Can Dream It, I Can Build It.” Mark Towle is not overstating anything when he says this as anyone who knows him understands.

Mark Towle is the owner and leader of Gotham Garage, the team that also stars alongside him in ‘Car Masters: Rust to Riches‘ where he builds unworldly supercars out of rusting broke-down vehicles, some of which are not even whole. Learn more about his career to find out his net worth. Also, is Mark Towle married? If he is, who is his wife?

Mark Towle’s Bio; Who is He?

Mark Towle was born in 1962, which makes his age 58 years as of 2020. Towle was born in Los Angeles, California, to a single mother who had him and his three other siblings to look after. So, perhaps you can tell that when it comes to his early life, Mark Towle did not come from a wealthy family. With such a financial limit, Mark never had enough money to buy toys for himself, so he took it up to himself to make some.

He and his best friends would go out dumpster-diving in search of broken and thrown toys and gadgets. Towle had a natural talent of not just fixing them but redesigning them to be even better than original. Who knew that a hobby born out of complexity would become a career.

Many people reading this may only recognize and know Mark Towle from Car Masters: Rust to Riches. However, only a few can identify him from his many TV appearances in the past. From car shows like Gearz, Kamen Rider Dragon Knight, and Jane Dixon Model Runway Spots to an appearance in alternative shows like America’s Most Wanted and The Today Show.

Before starting Gotham Garage, Mark Towle also had years of an extensive career designing and building Hollywood props, especially cars and other vehicles. However, he knew that his heart was truly towards building unique cars out of scratch. His work through Gotham Garage became so famous that producers came to him with a Netflix show, and you know the rest.

After two successful seasons of the show, we are sure Mike Towle’s net worth is a significant amount. We can’t forget that in the show, Mark Towle’s team brings in literal a wreck in the name of vehicles and then not just fixes them but turns them into either beautiful and sleek cars or mean machines. While he buys them for not much more than the $500 to $1,000 range, he is able to resell them for a six-figure amount.

Of course, a lot of the $100,000 or more in earnings goes to cover their expenses of using cutting edge technology and days of his and the crew’s time. Still, they make the right amount of profit, considering how Mark Towle also must get a salary for being a cast member. Unfortunately, both of Mark Towle’s net worth and salary remain under-review for now.

It will be unfair to you if we just consider Mark Towle’s career for his net worth. As journalists, we can’t sugarcoat the facts about his bio just because we like the guy; we also have to consider the negative factors affecting a celeb’s career. In Mark Towle’s career, so far, there has only been one such instance.

Mark Towle might be a comic book fan; after all, he did name his company as the Gotham Garage. It can be no coincidence that Towle lost a lawsuit to Warner Bros and DC for copyright claims against his batmobile replicas. Mark Towle has made either almost an exact copy of Adam West’s Batmobile or inspired projects, most notably for his friend, Joseph Morgan, which was the subject of the lawsuit.

Towle tried to argue that his works were “derivative,” but ultimately, Warner Bros and, more particularly, DC won the suit. We don’t know the figure; Towle may have had to pay as part of losing the lawsuit. However, he did make net earnings of $200,000 from batmobile replicas.

In total honesty, we do not even know if he is married, but if he is, we do have an idea on who could be his wife. Mark Towle’s wife or girlfriend makes a lot of appearances with him in various events, and you can even see her by his side in his or Gotham Garage’s social media pages. She is a beautiful woman with tattoos all over her right hand whose identity remains a secret.

Towle also never addresses the elephant in the room despite sharing photos with his partner. The one below even sees the two sharing a passionate kiss.

We will be keeping tabs on her and hopefully get more information on her soon. Maybe season 3 of Car Masters: Rust to Riches will have the answers we are looking for.