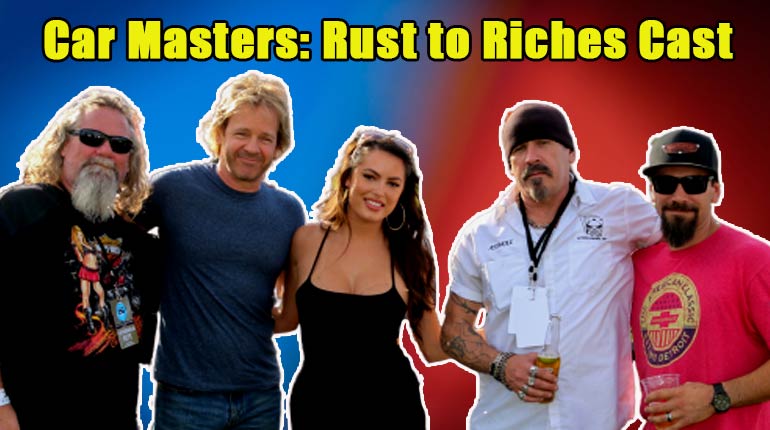 There are over a thousand shows out there about cars, hundreds alone about car restoration and upgrades, and why shouldn’t there be? A lot of people love cars, and they want more, which is why it has become such a vast program across different TV Channels and Networks. Now that streaming services are replacing the cable, Netflix also wants in on the action as it has brought a whole new type of car modification show.

By now, you must know what we are talking about. It is one of the hottest shows in the car genre of Netflix. If you don’t know what ‘Car Masters: Rust to Riches’ is, then it is your standard car modification show but with a twist.

The team featured in the show, Gotham Garage led by Mark Towle, brings in cars and other automobiles (or at least most of it) for not any expensive than $500 to $1000. They don’t just restore it but modify it to an unrecognizable beauty of a machine. It is nothing short of a miracle, and thus today we talk about the magicians that make it happen.

Mark Towle is the man who started the Gotham Garage in the first place after a long career of building cars and related props for movies and TV shows. Towle was born in 1962 and grew up with three siblings to a single mother. So, understandably he grew up poor and not having many luxuries in life.

While he could not buy new toys for himself, he and his best friends would go dumpster diving to scavenge for toys and gadgets. He would not just repair but redesign and modify them to be cooler. His understanding of his talents led him down the path where his toys will get bigger and better.

He has years of experience for building Hollywood props, and you may have also seen him in various other TV projects like Gearz, Jane Dixon Model Runway Spots, and Kamen Rider Dragon Knight. Mark also has credits for appearing in ‘The Today Show,’ ‘America’s Most Wanted,’ and several gearhead magazines.

The TV star decided to give his dream more shape by founding the Gotham Garage, where he and his team or co-stars of ‘Car Masters’ bring in broke-down vehicles that sometimes don’t even have all its parts intact. It is not always cars; they also take in bikes, and Mark personally also has to do similar work on boats. However, using a vast array of skills and new technology, they transform it into exotic and mean machines.

By the end, the cars cost an average of a six-figure sum. The show’s bio in various sources itself quotes that the team is responsible for making a $1000 vehicle worth more than $100,000. With a profit margin like that, we are sure Mark Towle’s net worth is also very impressive. However, for the time being, his net worth and salary are both under review.

Constance Nunes is the sole female mechanic of the show and a heartthrob for male viewers of the show. Nunes is also a model that explains her attractiveness. Nunes was born on November 17, 1989, in Portugal, but she later came and grew up in Los Angeles, California. If you were curious about her ethnicity, there you have it, she has Portuguese ethnic background.

Constance’s father was also a builder of mean muscle rides like her. Not only did he build cars, but he also was an excellent drag racer. As a car mechanic’s daughter, she already knew her way around cars, but slowly her modeling career began merging to the automotive industry like car trade shows.

So, she also decided to make it a full-time career, boasting 12 years plus experience. Some of her work experience includes being an Aftermarket Director as well as Service Specialist to car companies like BMW, Audi, Ford, and Acura. This is not all of her careers to consider in terms of calculating her net worth.

As a model, she has worked with Jockey, Wrangler, Jlux Label, Feral Cosmetics as well as Kim Kardashian Hollywood Game. Like her ‘Car Masters’ co-star, she also has a background in movies as a stuntwoman for movies like Bring It On and DodgeBall. Perhaps, this is how they had their first encounter.

Anyway, she joined his gang, and now they are both stars of ‘Car Masters: Rust to Riches.’ She must get a handsome salary from the show as well as other benefits of fame. Constance Nuna’s net worth, for the time being, is under review, but we are confident we will have her net worth soon enough, but we expect it to be high for someone whose first car was a 1964 Mustang that she still has and is proud of.

Did anyone catch Constance Nunes’ 2018 interview with Maxim? There she identifies her perfect date as;

My ideal date would be going to see a drag race or [a] monster truck rally […] I like that kind of stuff. Something loud and fun, and then follow it up with In-N-Out and beer in the bed of a truck just hanging out.”

In case any car lovers out there were getting any ideas after listening to this, don’t. Yes, Constance Nunes is a married woman and recently celebrated her one year anniversary. She married her husband by the name of Jared Toller in February 2019. You should’ve seen her beautiful wedding dress, which was an unorthodox sexy black gown. (See picture below)

We do not know much about Constance Nunes’ husband, but as long as she is happy, we approve of him. He is decent looking and also appears to love his wife very much.

Shawn Pilot is another unique character of the show ‘Car Masters: Rust to Riches.’ Like his co-stars, he too has had a long and diverse career leading him to his current stint on the Netflix show. We unfortunately, do not have much info on Shawn Pilot’s bio and early life. It must be because keeping a track on him is hard judging by his career.

You already may know Shawn Pilot is an actor, but did you know that he was in the 1999 film ‘Three Kings’ alongside George Clooney, Mark Wahlberg, and Ice Cube. The movie had a total collection of almost $108 million, which was more than 20 years ago. Shawn Pilot is also a famous Poker player, and we all know how much prize money is associated with professional gambling.

His entire career till now has been impressive and worthy of massive net worth, but his salary as a cast member of the show must further supplement Shawn Pilot’s net worth. His net worth is still under review, but considering how he was in Indie West Coast Custom a few years back gives us the idea that the sum is a humongous amount.

Michael Caveman Pyle lives up to his nickname as Caveman from his long hair and beard to his ability to get down and dirty for his work. He is by far the only person who looks the part of the car mechanic in this list. He lives and breathes cars, but despite being an old-timer, he fits in well with the crew and even serves as the comedic relief for a lot of his appearances.

Not much is there to know about Mike Pyle’s bio, so you should already have an idea that we have no idea about his net worth as well. From the show, we know he is married, but the identity of his wife, children, and details on his married life is all a mystery

Last but not least, Tony Quinones is the final member of the Gotham Garage cast. Like Mike, he brings a lot of experience and old-timer knowledge to the plate. However, despite the serious tone and his age, he actually loves to bring topics outside of cars and machines in the show, which is a refreshing change.

Another Similarity he has with Mike is the same level of mystery when it comes to Tony Quinones’s net worth, married life, and bio. We do know that he is also married and that he lives with his family in Murrieta, California.

Car Masters Season 1 made its breakthrough premiere with season 1 on September 14, 2018. The show was an instant hit, but something caused season 2 to be postponed and released 1.5 years later on March 27, 2020. Both the seasons have a total IMDb rating of 8.7, which is an excellent review, so you can count on the series being back for a new season 3.

However, the premiere date and other essential details are still missing about season 3. The series will likely try to form a tradition from this point on to release on March 2021. However, the current pandemic issue of coronavirus may cause a delay in their plans. We will have to wait and see to say anything with surety.