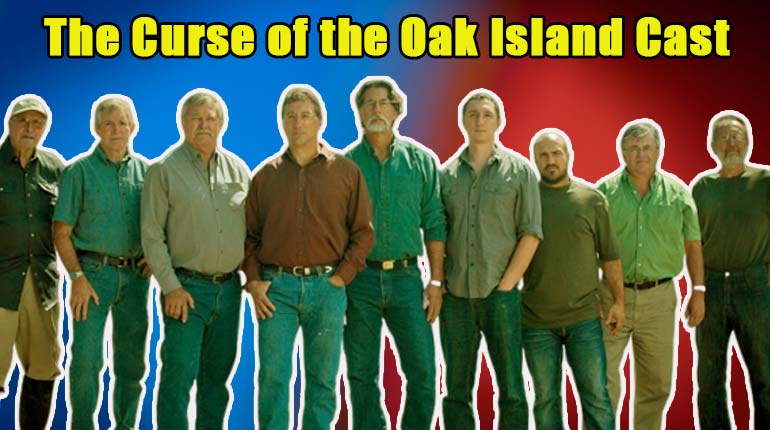 This show also discusses the new and old uncovered details about the island, and prior attempts to investigate the site. The Lagina brothers got into the treasure hunt after they read about it on the Reader’s Digest in 1965. That issue had an article about the Restall family’s work to investigate the so-called “Money Pit.” According to the show, areas of interest in the island would be “Money pit,” Borehole10-X, Smith’s Cove, “Nolan’s Cross,” etc. The Curse of The Oak Island‘s cast is seen going around these places in search of the treasure and historical artifacts in the show.

Let us take an inside look at The Curse of The Oak Island cast net worth, bio, and their married life.

Robert was born on 24th October 1955 and is currently 64 years of age. He is an American actor and voice actor. He has worked on over a hundred movies, TV programs, and video games. He also has the voice of Jim Raynor on the famous StarCraft series video game. Besides The Curse of the Oak Island, he is also popular for narrating Ancient Aliens.

Robert’s net worth is approximately $19 million. This is one of the highest net worth of The Curse of the Oak Island casts. We don’t know if Robert is married or not, as he doesn’t comment on the topic, and no-one has claimed to be his wife. Nobody has even claimed to be in relation to Robert, so it is unknown if he is still single or not. Robert is basically very tight-lipped, and there is also no information if he has any kids from being in relationships in the past.

Marty is one of the stars of the show, and the show follows him and his brother. Lagina is also an executive producer along with being the star of the show. Marty has been on 69 of the 91 episodes of the show. He also funds the Oak Island Tours Operation and Treasure Hunt.

Besides being a reality TV star, Marty is an engineer, entrepreneur, and businessman. He owns the Heritage Sustainable, which is a clean energy company. They are trying to utilize the wind to produce clean energy. Marty plans to plant 60 Wind turbines, which will be enough to provide for 25% of the whole Michigan states power needs.

Born on 26th August 1955, Marty Lagina is currently 65 years of age and a Millionaire. While is net worth is a topic of discussion with many people saying it is about $40 million but ‘celebrity net worth’ saying its $100 million. Either way, he is a millionaire through and through.

Marty is taken, and his wife’s name is Margaret Olivia Lagina, and he has two children with her. His daughter’s name is Maddie, and his son’s name is Alex. Marty also owns a winery Michigan which his son Alex looks after.

Rick Lagina is the brother of Marty Lagina we have been talking about. He and his brother Marty are the stars of the show. He has been on the show for 68 of the 91 episodes. Prior to the treasure hunt, he was a postal worker. Rick is a man of straight and stubborn nature; he sees the world in black and white as he puts it, “Once in, forever in.”

Despite Rick’s humble background as a retired postal worker, his net worth is $2 million, which can be considered a small fortune. He most likely made this money from the show The Curse of The Oak Island and sources surrounding the Oak Island project.

Rick is a private man and has not given any information regarding his family at all. It is unknown if Rick is married or single. There was a rumor which seemed to dub him gay, but there has been no proof denying or supporting the claim, so it is unclear.

Born on 13th January 1952, Rick is currently 68 years old. The rumors about him dying are also false. The crew was evacuated as soon as the poisonous gas was detected.

Charles Barkhouse is the historian, co-star, and production consultant of the show The Curse of The Oak Island. He has been in 67 episodes out of the 91 episodes which have aired so far.

Charles has spent a quarter-century investigating the island, and his grandmother used to live in the island in the 30s and 40s. So he has a lot of information about the island and its history. He is the best resource that Lagina brothers have at finding the treasure. Charles is also the Museum curator on Oak Island.

Charles is considered a Freemason as he appears to be rocking the Freemason cap on the show. But there is speculation about him being a secret Templar trying to protect the Islands treasure and tripping up the Lagina brothers.

He is a private person that does not crave the limelight, so his personal information is not available. It is a mystery; where he is married or not or if he has any childrens.

Jack is one of the co-stars of the show, and he is also a producer in the show now, slowly moving to become an executive producer as well. He is currently 30 years of age as he was claimed he was 28 in an interview in 2017. Jack has been on 66 episodes of the show, which has 91 episodes in total.

Jack is also co-owner of Remote Energy Solutions. He hasn’t been very public about his personal information, but he is the stepson of the multi-millionaire Craig Tester, who also is in the show.

Jack estimated net worth is over $3 million.

Thirty years ago, David had an accident, but that doesn’t stop him from being a treasure hunter. He is also a producer of the show.

Not much is known in terms of his personal life as he likest o keep it private, but his net worth is approximated at $1 million. it is unknown if he has any childrens or not.

Besides a treasure hunter and reality TV personality, he is an engineer. He used to be Mart Lagina’s roommate in college. Craig was formerly in the oil business, and he used to wrestle for sport in his college days as a hobby. He has a cool demeanor in the show, which is how he is in real life.

Craig is a married guy, and his wife’s name is Rebecca Tester. They have three children together. One of those children is adopted, Jack Begley, who is from Rebecca’s previous marriage. Craig’s son Drake Begley has passed away two years ago, in the march of 2017, at the age of 16, due to a seizure disorder which he had since birth. He also has a daughter named Madeline Begley.

Craig tester’s net worth is approximately $8 million, of which his mansion is worth $3.75 million.

Alex (The Curse of the Oak Island cast) was born in 1987 and is now 33 years of age. He is also an engineer like his father but has ventured off to more entrepreneurial options as his way of living. Alex also looks after his father’s winery, but by no means is he living under his father’s shadow. Alex is in a league of his own with a staggering net worth of $50 million. He nad uncle Rick own most of the share of Oak Island Tours and Treasure Hunt.

Alex is currently single and has no children from any previous relationships.

Gray is the guy with the metal detector in the show. The specialist regarding identifying anything of value and estimating its value. Before coming on the show, he used to go to the beach hunting for old riches that might surface or get beached. He has appeared in 47 of the 91 episodes aired; he has been with the show since 2016.

Gray has always been a treasure hunter, way before getting into the Oak Island crew. His greatest find to date is the magnificent Spanish 1715 fleet treasure ring, “Precious,” 22K Inca gold with nine flawless Colombian emeralds. The ring is valued at $500k. That is just a single find; he has many other finds which are quite valuable.

Gray’s networth hasn’t been revealed to the public, but we can assume it to be over $500k as his single find has that price tag. Unfortunately, there is no info out there about his private life either on the internet. So, it is hard to say if he is married or not or if he has any childrens or if he is in relation.

Gray has written a range of books about his unique beach and water hunting methods, details about those books are available on his Facebook page

Caption: Doug Crowell is author of many books

Doug Crowell is the researcher and historian present in the shot The Curse of The Oak Island. He has been on the show since 2016 and has been on 44 episodes of the 91 aired.

Doug works with his partner and team in the Blockhouse Investigations. Much about Doug Crowell is unknown as his screen time in the show is very less, and there is almost no information on the internet about his private life.

The Curse of The Oak Island Cast Controversies

The Curse od The Oak Island cast have their fair share of the controversies as the show itself is pretty mysterious. Trying to unveil the treasure in the island. After all, the show is based on the treasure, which is believed to be cursed for the deaths of seven men among whoever pursues it.

Some of the most common controversies and other asked questions are listed below,

Who has left the show?

It is surprising, but none of the cast members have actually left the show, which involves going around digging in a cursed Island. But a few of the crew members have died either by natural causes or in accidents, is it the curse in action?

The Curse of The Oak Island Cast Net Worth & Age