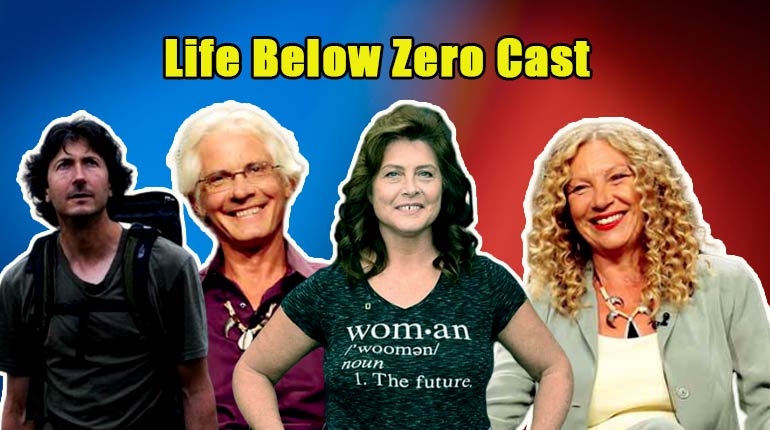 Have you ever think what it is like to live in the remotest part of Alaska. Thank the National Geographic docu-series “Life Below Zero,” viewers get to know exactly how it feels like.

The show has won Four Primetime Creative Arts Emmy Awards for Outstanding Cinematography and a Picture Editing for a Reality Program. Alaska is surrounded by nothing but the great Alaskan wild, which includes extreme temperatures ready to kill the wild animals at any time. The cast members survived with nothing but the bare necessities. Through the show, it has taken the viewers on an epic journey that is extremely difficult. Who is in it? Also, know the net worth, salary, and bio of each cast member.

One of the main cast members of the Life Below Zero is Sue Aikens. Sue Aikens was born on July 1, 1963, in Mount Prospect, Illinois, United States. The 55 years old reality star was married three times, but none of her relationships long lasted. She is the mother of two grown-up children and married children.

Sue lives 500 miles from the nearest city and 80 miles from the closed road. She has spent most of her life in Alaska. Aikens owns and operates Kavik River Camp and also loves sharing her experience of her camp during the hunting season.

Chip and Agnes Hailstone Net Worth

Chip and Anges Hailstone one of the successful stars in Life Below Zero. The couple lived with their seven children on the Kobuk River in Noorvik 19 miles North of the Arctic Circle. Before moving to Alaska, Chip Hailstone lived in Kalispell, Montana, whereas Agnes is a native Alaskan. Agnes was born and raised in Noorvik, who spent her entire life in Alaska.

Chip and Agnes, including their children, are featured on the show. The Hailstones move seasonally to track down the best hunt and setting their tent on the ice. The couple has been training their kids, giving them the ability to survive in the extreme temperatures using the Inupiaq traditions. The Hailstones hunt together to survived their family.

Glenn Villeneuve rose to stardom after appearing on Life Below Zero. He is a man who prefers being in a natural environment. He is an avid hunter and lives in the Brooks Range by a lake that is surrounded by mountains and 60 miles away from the nearest road. Glenn indeed left civilization and lives in the remotest area of Alsaka.

The Alaskan resident is the father of four. He lives with his partner Trisha Kazan in a primitive cabin that has no powers, no running water, and no heat except the wood they chop. He is a proud dad to children Willow Leaves and Wolf Song, born from his previous marriage. To survive, he hunts moose, caribou, Porcupine, ptarmigan, and ship. A

Despite his simple living, Gleen makes six-figures of worth from the reality show. Reported, the salary is his main income, which also includes his real estate. It is said that Gleen Villeneuve’s net worth is said to be $1 million.

Jessie Holmes is one of the favorite cast members on Life Below Zero. He is a fisherman, hunter and dog sled racer and lives in Nenana, Alaska. He has more than 40 sled dogs that he has bred, raised, and trained on his own.

Jessie was born on February 21, 1980, in Alabama that makes his age 40 now. At the age of 16, Jessie left his home, making his way to Alaska bu hunting freight trains. To survive in extreme temperatures, he follows the Alaskan traditions that not only sustain remote lifestyle but also make a living by building cabins, boats, fish wheels, and sleds.

This reality star keeps his private life away from the camera. It is unknown whether Jessie Holmes is married or not. Furthermore, there is no record of his girlfriend or dating life as well. As a result, Homes is probably single. We hope he soon finds his perfect match with whom he shares the rest of his life with his dream partner.

Holmes makes most of his money from the show as well as a carpenter. Jessie’s estimated net worth is $500,000. However, the salary he paid from the show is still under the radar.

Another two cast members of Life Below Zero are Kate and Andy Bassich. Andy and ex-wife Kate Bassich were together for 13 years. The couple featured in a few seasons together after they got a divorce in 2016, they both parted their ways, and Kate moved to Calico Bluff. So what was the cause of the divorce?

The couple lived an adventurous life in calico Bluff before moving to Alaska. Together, they worked hard feeding the dogs, heating with wood, and prepared the meal. Also, they went hunting moose, black bear, wolf, and fishing.

The reason behind their separation was the abusive behavior and emotionally tortured by none other than Andy Bassich. Sources claimed that she left the wilderness and currently lives in Canada.

After the divorce, Andy lives in on the Yukon River near Eagle, Alaska, with his twenty-five sled dogs. He used his dogs for transportation and to work around his homestead. There is no detail about their kids.

Erik and Martha Salitan Net Worth

Erik and Martha live in the state of Alaska with their son named Lucas. Erik was born on 9th February 1984 in the USA and completed his degree in Applied Science from the University of Alaska Hunters Association. Further, he runs his guiding department, ‘Bushwhack Alaska Guiding and Outfitting.’

His wife, Martha, was born in Alaska and grew up in Ilamnia. The info of her childhood and educational background are unavailable. Moreover, she owns a Blanchard Family Funeral Home and Birch Hill Cemetery.

His wife appeared in a total of 16 episodes, whereas Eric made his appearance in 36 events on Life Below Zero. However, the couple hasn’t given any explanation about why they left. Reportedly, the couple left the show to expand their guiding business.

Erik is the part of the several hunting groups, including the Alaska professional Hunters Association and the Northwest Sportsmen Club. Erik and Martha have a combined estimated net worth are to be around $400,000.During the show, their salary per episode is $4,500.

Ricko DeWilde is one of the newest cast members on Life Below Zero. He joined the Nat Geo’s reality show back in 2018. Ricko was born and raised in Alaska and had been living from civilization for more than a decade.

The 44 years old Ricko is from the village of Huslia in Interior Alaska. He is one of 14 children who never went to school until his senior year in high school. Ricko was homeschooled along with his siblings and grew ups in camp, lives off the land, and goes to hunting, trapping and fishing.

He is of an Athabascan Indian. According to his words, “Ricko’s late father and mother built lost od cabins in different areas where they lived and also went for hun, trap, and farm for foods in different locations with the changing seasons.”

DeWilde is master of his environment, and his life motto is, “Every day, you work to survive.” Rockie is a married man and a father of five children. DeWilde’s net worth is said to be around $150,000.

Cody Allen is the former cast member of Life Below Zero. He joined the show in season three, along with Martha Mae Salitan, and left that same year. Cody was born and raised in Oregon. He loves rafting hiking, biking, swimming, and fishing.

Before moving to Alaska, he worked at Government Camp at the base of Mt. Hood by age 19. Eventually, he is in love with winter and decided to move in Alaska. He lives in the Alaskan land with his wife.

Cody Allen appeared in only four episodes in 2014. At the time, he makes pretty thousands of bucks from the show. Further, the net worth of Cody Allen is under review. There is no information regarding his current job and income.

Why did Chip Hailstone go to Jail?

It’s a question tha has been on the viewers’ mind. In mid 2o017, Chip was sentenced to jail for 15 months in charged and convicted on two accounts on making false statements and two counts of perjury to police.

Back in 2011, Chip claimed that he assaulted his daughter Timaiq who was 17 at the time. In another incident, Hailstone claimed that a Noorvik resident pointed a rifle at his daughter after the incident involving his stepson. He appealed for his perjury conviction while he was in jail. During the premiere of the show, his family had to hunt without him.

Life in the Alaskan land might be simple but not easy. To survive in freezing weather, you have to struggles with your daily needs such as foods, home, clothes. To fulfill the needs, the cast members go for the hunting and trapping in the Alaskan forest. If something goes wrong, there’s no one to help. The only way that gets out of the danger is to be yourself; otherwise, you will happen.

Luckily, none of the cast members from the show has died. But the two cast members, Sue and Glenn, have faced danger. Once Sue suffered from frostbite and even survived a bear attack. On the other side, Glenn was surrounded by the wolves. However, he managed to get out of there and returned safely to his cabin.

Caption: Glenn Villeneuve had a close call to an accident after a run-in with the wolves

Life Below Zero: Fake Or Real?

National Geographic reality show “Life Below Zero” took the viewers to the Alaskan wilderness, where the cast members showed how they live in the freezing temperature (60 degrees below zero to be exact). Alaska is surrounded by wild animals that are ready to kill at any moment. The show initially aired back in 2013 on Nat Geo.

Current cast member Sue Aikens accused the series of being scripted in 2017. Aikens claimed that she was forced to perform dangerous stunts that she was unfamiliar with, and was told she would have to travel by snow machine instead of using an Ar=rfo ATV. As a result, she got injured. Sue added, she was not able to take her pet dog with her, which made her upset because the series is not supposed to be scripted.

On the other hand, Glenn Villeneuve also has some trouble with a cameraman and sent him packing. He said, “I’ m a big believer in arranging things so that I don’t have to work or spend time with people I don’t like. That is a priority for me.”

Will Life Below Zero Return On National Geographic?

So far, there have been 12 seasons of Life Below Zero. The show is produced by Barbara Doram and Josh feed, which aired on National Geographic Channel in 2013. Now, this reality show is in its season 13.

The season 13 of Life Below Zero which premiered on September 24, 2019, has completed a record-breaking total of 19 episodes. It used to most only hold 8-12 episodes in past seasons. This season already had 19 episodes with the last episode, ‘Snow Daze’ premiering on January 29, 2020. This just goes to show the popularity of the show.

Caption: Life Below Zero has confirmed 2 spin-off series in the work