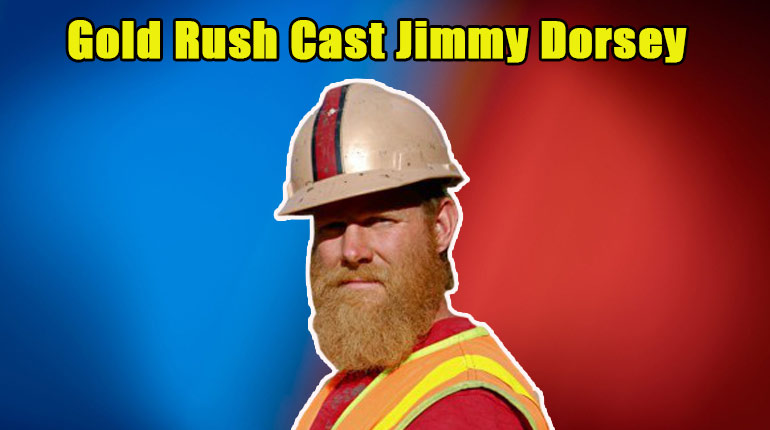 From Journalists to TV characters, it is not that uncommon to have to say farewell to different forms of TV personalities in any platform. While most of the time, it is a natural emotional one, it wouldn’t be TV if some weren’t dramatic, and there isn’t a TV conflict and farewell more dramatic than that of Jimmy Dorsey from Gold Rush.

Only OG fans know about all the flaming drama that went down with Jimmy Dorsey, who was with Gold Rush for only season 1. We will go in-depth below, but oversimplifying it; there was a fight, someone got hurt, interviews calling each other out were made, and cabins were burnt before Jimmy Dorsey’s exit from the show.

Find out where Gold Rush’s Jimmy Dorsey is now and what he is doing, along with his net worth and married life.

What is Jimmy Dorsey Doing Now?

“Jimmy Dorsey,” Even Gold Rush fans who know him have surely not heard his name in a long time. Hopefully, none of you have forgotten about him just yet, and some of you probably even have thought of him every now and then.

We don’t blame you as Jimmy Dorsey fell off the radar after leaving Gold Rush before its rise to popularity in mid-season 1. Dorsey left after series of frustrating events with leader Todd Hoffman and the rest of his crew. The fan hit the ceiling after a physical altercation with co-star Greg Remsburg.

Instead of a few interviews right after he quit Gold Rush, Jimmy Dorsey did not reemerge in the media, but that will be changing very soon. We found Jimmy Dorsey on Facebook, and it turns out that he is an entirely different person. You might remember him as a red-bearded rough-looking man from the show, but now he sports a clean shave and haircut, which makes him look younger than he did back in the day.

You have to see it to believe it.

Furthermore, he is now the owner and CEO of Jimmy Dorsey Real Estate. We did think that after leaving Gold Rush, Dorsey would return to his business as a realtor, which he initially went after the economic crisis. However, he has surprisingly made more progress than we had ever hoped for. He also shared on his Facebook that he returned to TV, taking his business idea to ‘Shark Tank’ in 2019.

As fans of Shark Tank also, we have not come across the episode featuring Jimmy or his business. Maybe it did not make the cut, or we missed him due to his serious makeover.

Jimmy Dorsey became a star of Gold Rush after meeting co-star Todd Hoffman while they were both huntings. Hoffman would hire Dorsey into his team. Todd Hoffman’s team had a prolonged start in season 1, and this is particular was frustrating Dorsey over everybody. He had left his realtor business, where he employed 20 others due to the economic crash of that time. So, he had very little money and a family of 3 to fend for.

On one side, his frustration with his financial crisis kept pushing him to show aggressive and erratic behavior. At the same time, the rest of the team also kept making him feel useless and like an outcast.

Todd Hoffman, who also later quit Gold Rush in season 8, did not mainly make it easy for Dorsey. Despite knowing his background, Hoffman would always angrily overreact to Dorsey’s actions, including a personal attack after Dorsey scolded Hoffman’s son for leaving the food out in the bear territory.

We are not taking any sides here, but even the show made it look like Jimmy Dorsey was a bad guy when in our opinion, sure, he was a little erratic and of short temper but not a bad guy. Especially after the show clearly gave us an idea about his financial conditions and family woes, we can understand his frustrations and upset.

Many sources have even gone so far to blame Todd Hoffman and the rest of the crew to be bullies for mistreating Jimmy in so many ways.

Jimmy Dorsey would stand true to his promise for Todd Hoffman about doing other work if he did not get any while mining. He would go help do some salmon-fishing, which did not sit well with the rest of the crew. So, when shortly after, Dorsey would return to set up the Wave Table, the other kept complaining that it was not done right and thus was very slow.

After speeding it up, the team lost all the dirt and the gold within, which became the burst of all the tension over the past days. It would even lead to Dorsey trading blows with co-star Greg Remsburg. Remsburg will have the upper hand. Later, Dorsey revealed that the fight had caused him severe injury in the form of broken ribs.

Later, Todd Hoffman and the rest of the crew would burn down and then destroy Dorsey’s cabin after he quit from the show. Greg would meet up with Jimmy a month or two later after their altercation on camera. Greg would half-heartedly apologize for his actions while Jimmy did not say much, and that was the last we saw of Jimmy.

Caption: Jimmy Dorsey meets with Greg Remsburg after their fight

As if Jimmy even did leave on good terms, in an interview with ‘Oregon Gold,’ he spoke things making that relationship even sour. Dorsey apparently never had any official or legal paperwork agreement with the show. Honestly, it was the mistake on his part, but all he did was a “cowboy deal” with Todd Hoffman for a part of the gold.

It would be a massive mistake as not only did he not get any profit off of the gold but also only got a total salary of $3,000 for appearing in the show. The original agreement was for $1,000 an episode. It should technically have been four times the amount since Jimmy appeared in 12 episodes of the show, so a total of $12,000.

He opened up on a lot about the Gold Rush, including the bullying from Hoffman’s crew, the unruly portrayal of Jimmy’s image through only a fraction of his footage and the crew’s inexperience. However, the most shocking thing he did was say that the show Gold Rush was staged.

“It is scripted from the beginning. They knew exactly what they wanted to see out of the program. Even me leaving was scripted, but in the way in which it happened was not,” he said.

Todd Hoffman would later call this interview to be “not only false but totally uncool” only had this to say about his side of the story, “I can’t tell my side of the story because the real story would hurt him and I’m not interested in a pissing match, I don’t need it.”

No, Jimmy Dorsey, unfortunately, has not returned to Gold Rush, and with all that history, we don’t think he ever will. He did, however, return to mining. He did not instantly respond to becoming a realtor. As he said in the interview,

“I am taking classes in Nevada at a school of mining. I am learning about gold mining, and I am not done with gold mining.” He said also revealing his plans in the mining business, “I am looking at a mine up north. There a couple of hard rock mines in Oregon that I am looking at. We are performing assays, and I am talking to investors right now.”

Even in his Facebook, he proudly states his experience and skills in hard rock mining. Despite some posts on social media about mining, he currently is mostly busy in his realtor business, which must be doing well for it to land a spot in Shark Tank.

Jimmy Dorsey’s net worth, for the time being, is under review, but knowing the net worth of some of his co-stars as well as his recent success, we can understand it to be a massive amount.

The former Gold Rush star is happily married to his wife, Joy Dorsey, for a long time. We do not know when and how they got married, but you remember seeing his wife in Gold Rush, don’t you? You not only met with his wife but his two children as well. We never got to know much about his wife then, and we don’t know much about her now as well.

We do know that his wife, Joy, is a singer, and she is a graduate of Portland State University. Well, since you last saw them, they had one more child, a daughter since you saw them in Gold Rush. So, altogether they have three children in total. Their youngest daughter’s name is Lena. Their middle child is a son, and their oldest daughter is Ella.

Jimmy’s oldest daughter seems to share both of her parents’ love for music. She plays the cello in classical music and, at a young age, is already performing in the local orchestras. Dorsey certainly seems to be very proud of his daughter.

Jim Dorsey is a gold miner who formerly was a cast member of the hit Discovery show ‘Gold Rush.’ Not much is known about his early life or bio is from Clackamas Country, Oregon. Dorsey was studying at the Mt. Hood Community College, where he was learning to play the stand-up banjo. He dropped out of the school but still loves to play his banjo and performs locally with his band and other artists.

Before joining Gold Rush, Jim Dorsey worked several jobs from being a truck driver to a snowboard instructor Mt Hood Meadows. He only became a realtor after the real estate mid-2000 boom in his home state of Oregon; he moved to Sandy, Oregon. Currently, he resides happily with his family in Happy Valley, Oregon.