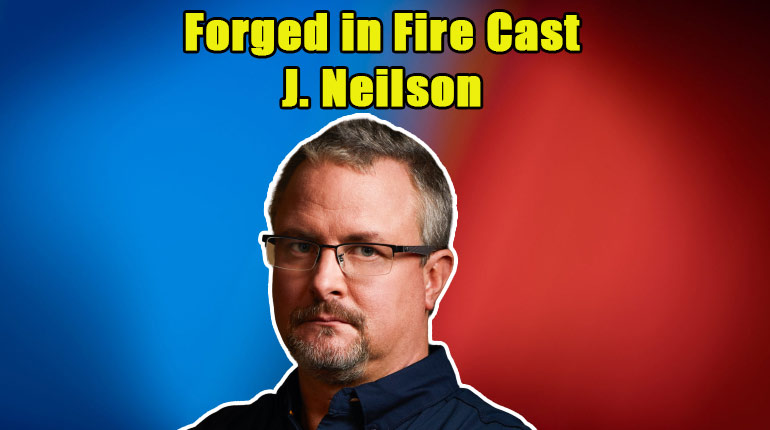 People take a lot of pride in their titles from scholarly ones like Doctors and Professors to army ones like General and Commander. However, few of us can obtain titles that sound straight off Star Wars movies like ‘Master Smith,’ a title help by only a little over 100 people in the USA. One of those elite people is James Neilson, who goes by J. Neilson.

J. Neilson is a world-renowned personality from his position as the judge of the hit History Channel series ‘Forged in Fire.’ What many people don’t know much about is his married life. So, let us talk about his wife and children, shall we? But first, J. Neilson’s net worth and career in detail.

Who is J. Neilson? His Early Life & Bio

J. Neilson is one of the most famous cast members of ‘Forged in Fire.’ He is the judge that is mostly the first to test all the blades competing in the show through a strength test. It means that Neilson is famous or, more preferably, infamous for taking the knives made by the contestants with hard work and just ruthlessly thrashing and stabbing them in hard surfaces to test their strength and durability.

In short, he is one of the most dreaded people for the competitors on the show. J. Neilson was born on November 8, 1969, and hails from Towanda, Pennsylvania. He has an intense experience in making knives that dates back as long as 30 years. He began his career self-taught and alone, meaning that most of it was trial and error.

To say his work starting out was rough would be an understatement, but he did not know how much until one day he went to a local knife show in his state. He was there to clear his stock but had a chance meeting with Keith Bagley, a respected knife-maker. According to Neilson, Bagley “took pity” on his work and brought him in as his apprentice.

Neilson learned the basics of forging from Keith and came back home to do it right this time around. He still likes to work alone at his same ‘Shop in the Woods’ workshop. This has made him adequate in all steps and elements of blade-making. His work began to gain prominence and reputation in the bladesmithing world as he became a professional bladesmith since 2004.

He then became part of the American Bladesmith Society and, shortly after, managed to become a Master Smith. It is a title only held by around 120 people from the organization’s distinction. J. Neilson still personally makes all his blades and a custom sheath for each one of his weapons, which you can buy on different platforms.

J. Neilson’s net worth as of 2020 is approximately $500,000 to $1 million. We are sorry we are not able to give you a more accurate net worth of J. Neilson, but it is a little hard to deduce an exact sum with his vague career.

J. Neilson is a married man, although there is hardly anything out there about his married life. We do know the basics like how his wife’s name is Beckie Allen Neilson. The 50-year-old has been with his wife for over 11 years, so we can say that they’ve been married for a relatively reasonable amount of time within that time.

J. Neilson has two children, and although we do not know their names, we know that it is a son and a daughter. His daughter is the older one who is around 16 years old, and his son is about nine years old. There is a good chance that his daughter is a product of J Neilson’s past marriage or relationship. Similarly, there is also a slight chance for his son to also be a child with an ex-partner.

No, J. Neilson is not leaving ‘Forged in Fire,’ but we can see where all the concerns are coming from. J. Neilson, along with the rest of the show’s cast like Will Willis and Doug Marcaida, has been constant since the show’s inception in 2015. However, J Neilson has been absent is a lot of the past seasons of the show.

Season 3, in particular, was when J. Neilson was missing from almost the entire season. Then too, many of you were storming the internet, asking if he left the show. Well, some of you may have found the answer right then that Neilson took a leave from the show to get a critical surgery on his hand. Neilson had a light fracture on his side when tripping and falling on wet grass years prior.

It wasn’t that serious, and thus Neilson left it as it is, hoping it would heal naturally. However, it became a growing pain and issue on him, and therefore not procrastinating anymore, he went ahead to have surgery. In that time, a fellow Master smith, Jason Knight, came to fill Neilson’s position as the judge temporarily.

In season 4 too, Neilson went missing for the majority of the season but returned around the end. During season 4, former ‘Forged in Fire’ first two-time winner, Ben Abbott came to substitute judge the show.