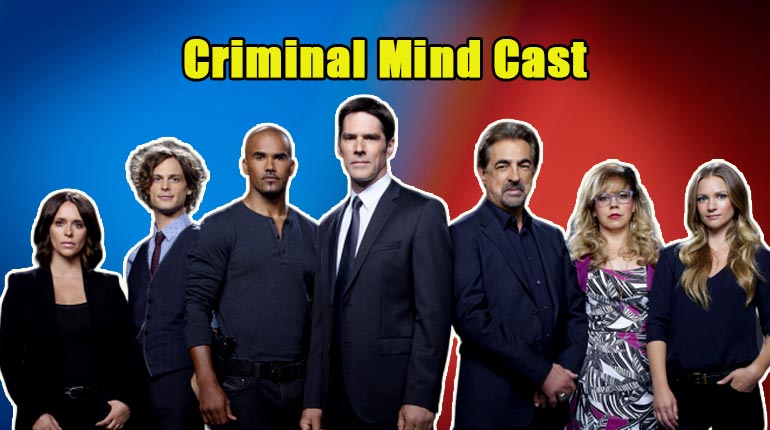 Since the highly popular CBS crime drama series, Criminal Minds came to an end this February after running for 15 long seasons. Fans are curious to know about the net worth of some of the prominent cast members of the show. Since you may not get the chance later, why not check out the Criminal Minds Cast Net Worth.

From the following article, explore the net worth of the ten great Criminal Minds cast members from the below article. Also, read the article till the end and discover the personal and professional lives of stars like Matthew Gray Gubler, Adam Rodriguez, Aisha Tyler, Joe Mantegna, AJ Cook, Kristen Vangness, Shemar Moore, Paget Brewster, Mandy Patinkin, and Thomas Gibson.

Born on March 9, 1980, in the American state of Las Vegas, Nevada, Matthew Gray Gubler is famous as Dr. Spencer Reid in the CBS crime drama series, Criminal Minds. He has acted in movies such as RV, How to Be a Serial Killer, Suburban Gothic,68 Kill, Zoe, and several more

As per numerous online sites, the Criminal Mind cast member, Matthew Gray Gubler’s net worth is at $10 million. Similarly, he makes $150,000 salary per episode. Besides earning the colossal sum of income from his acting profession,

Matthew also gains more money as an author. In April 2019, he also released a book entitled Rumple Buttercup: A Story of Bananas, Belonging, and Being Yourself! Currently, Gubler is single and unmarried.

Rodriguez, born on April 2, 1975, in Yonkers, New York, USA, is an American actor known for playing the role of Fugitive Task Force Agent and agent Luke Alvez in Criminal Minds. Adam began his acting journey with the crime drama series, NYPD Blue, in 1997. Furthermore, Adam made his presence felt in music videos such as Lionel Richie I Call It Love, 50 Cent’s Many Men, Jennifer Lopez’s If You Had My Love, and many more.

As of now, the Criminal Mind star, Adam Rogriguez’s net worth is at $16 million. He can make such fortune from his successful career as an actor. Similarly, Adams has directed several episodes of TV shows like CSI: Miami, Scorpion, and Criminal Minds.

Nonetheless, he is a happily married guy. Adam tied his wedding knot with his longtime girlfriend, model Grace Gail on May 2, 2016, in a grand wedding ceremony held at Tuscany, Italy. The beautiful couple is also blessed with two children, elder daughter Frankie Elle Rodrigez, born in 2014 and younger daughter born in January 2017.

Aisha Tyler is an American actress, TV host, producer, and director. Born on September 18, 1970, in the lovely state of San Francisco, California, USA, Tyler began her acting profession with the TV film, Grand Avenue, in 1996. Later in 2000, Tyler made her big-screen debut with the movie, Dancing in September. Furthermore, Aisha has also hosted shows like The Fifth Wheel and The Talk.

However, her roles as Andrea Marino in the first season of Ghost Whisperer and portraying Dr. Tara Lewis in Criminal Minds made her a household name in America. On the other hand, Aisha Tyler ‘s net worth is estimated to be around $ 8 million.

Reflecting on her private life, Tyler married attorney Jeff Tietjens in the early 1990s. The couple got separated in January 2015 and officially filed for divorce in April 2016, which was finalized in May 2017. Currently, she is neither dating someone new or remarried, but single life can be joyful too.

Born on November 13, 1947, in the state of Chicago, Illinois, USA, Joe Mantegna is known for playing the main character of David Rossi in crime drama series, Criminal Minds.

He made his acting debut with the musical film, Hair in 1969 and made his big-screen debut with the movie, Medusa Challenger in 1976. Likewise, he has acted from the 1960s onwards and amassed an impressive wealth from his excellent acting profession.

As of current recording, Joe Mantegna ‘s net worth is $18 million. Moreover, he has also bought a home, which was $1.28 million.

Likewise, Mantegna married his longtime girlfriend, Arlene Vrhel, on October 3, 1975. The duo is the parents of two daughters, Mia and Gia. Arlene was once the owner of Chicago themed restaurant named Taste Chicago in California, which shut down in March 2019. The couple has two daughters, Mia, born in 1987, and Gina, born in 1990.

AJ Cook or also known as Andrea Joy Cook was born July 22, 1978, is a Canadian actress popular for her role as Supervisory Special Agent Jennifer JJ Jareau on crime drama series, Criminal Minds. Similarly, she has also acted in big budgeted movies like Final Destination 2, Out Cold, and Wishmaster 3:Beyond the Gates of Hell.

From her acting profession, AJ Cook has collected a vast amount of fortune from her career. The longtime cast member of Criminal Minds, Cook, is assumed to get around $100,000 per episode. On the other hand, AJ Cook’s net worth is $4 million. With her net worth, she is enjoying a great lifestyle with her family.

Kirsten Vangsness is famed for playing the role of Penelope Garcia on Criminal Minds. She was born on July 7, 1972, in Pasadena, California, to Errol Leroy Vangsness and Barbara Mary.

Kirsten Vangsness made her acting debut with the comedy film, Sometimes Santa’s Gotta Get Whacked in 1998. In 2005, Vangsness got the most significant break of her career when she was got the role of Penelope Grace Garcia in the crime drama television show Criminal Minds.

Additionally, Kristen has also appeared in movies such as In My Sleep, Kill Me Deadly, Dave Made a Maze, A-List, and several more.

Working in the TV mentioned above shows and movies have helped her to gain both fame and fortune. As of now, Kristen Vangsness’s net worth is assumed to be around $3 million. Such a net worth has helped her to live a happy and lavish lifestyle.

Nonetheless, Kristen is a bisexual woman. She began dating Melanie Goldstein from 2006 to 2013 and also got engaged to actor Keith Hanson in 2015 after dating with him for a brief period.

Model turned actor Shemar Moore is famous for appearing in The Young and the Restless. Furthermore, he also gained worldwide recognition for playing the role of Derek Morgan on the crime drama series, Criminal Minds.

Currently, Shemar Moore is portraying the role of Sergeant Daniel “Hondo” Harrelson on the CBS crime drama TV series, Swat. On the other hand, Shemar Moore has achieved stardom and makes millions of dollars from his acting profession. As per several online sources, his net worth is $16 million.

Besides living a luxurious and glamorous life, Moore is known for dating American soccer player, Shawana Gordon from 2014 before they broke up a year later in 2015. Similarly, he was also dating actress Anabelle Acosta in 2018. As of recent happening, he is presently single and unmarried.

Born on March 10, 1969, in the busy state of Concord, Massachusetts, USA, Paget Brewster is famous for playing the character of Emily Prentiss in Criminal Minds. Brewster made her acting debut with the TV show, Friends and appeared in movies such as Let’s Talk About Sex, Now You Know, Man of the House, Welcome to the Happiness, and many more.

Nonetheless, she has gone on to earn a sizeable sum of income from her acting profession. As of now, Criminal Mind star, Paget Brewster’s net worth is approximately set at $9 million. Currently, she is residing in her fancy home in Los Angeles.

Furthermore, Paget is married to her husband, Steve Damstra, since November 29,2014, in Los Angeles, California, after being engaged on March 17, 2013. The duo has not had any children of their own as of now.

Mandy Patinkin is an American actor-singer and famous for playing Jason Gideon in the Criminal Cast. He appeared in the show from season 1,2,3 and 10. Currently, he is starring as Saul Berenson in the Showtime TV show, Homeland.

Since making acting debut with the TV movie, Charleston in 1977, he has become one of the recognizable faces of the entertainment industry. Similarly, he has also accumulated a decent income from his impressive acting career. As of several sources, Mandy Patinkin’s net worth is $10 million and makes $125K per episode from Homeland.

Likewise, Mandy is happily married to his wife, Kathryn Grody, an actress on June 15, 1980. In due course of time, the duo is the parents of two sons, Gideon and Issac.

Born on July 3, 1962, in South Carolina, USA, the talented Thomas Gibson played at Aaron Hotchner in the CBS TV series, Criminal Minds, from 2015 to 2016. Besides, he has appeared in hit TV series like Chicago Hope and Dharma & Greg.

Since 1980, he has made quite a name for himself in the American entertainment industry. Gibson has earned a remarkable fortune from his acting profession. Thomas Gibson’s net worth is $18 million. Currently, he will star in the series, Shadow Wolves in 2019

Moreover, Gibson was previously married to his wife, Christine, with whom he had three children; Agatha Marie, James Parker, and Travis Carter. Gibson and his spouse officially went their separate ways in 2011 and filed for divorce in 2014. The divorce was finally settled on February 14, 2018.

Like any series, Criminal Mind also has its fair share of trouble history. The show’s actor Thomas Gibson was fired for a two-episode as a result of physical altercation with series writer/producer Virgil Williams which occurred on the set on August 12, 2016.

Furthermore, Gibson had also found himself into another trouble when, in December 2010, he was alleged to shove assistant director during a location downtown in LA and got into anger management.

Caption: Why Thomas Gibson was fired from Criminal minds

Thomas pleaded guilty on the count of alcohol-related reckless driving and given a 36 months probation as a punishment, even he was fined $300 in court fees and had to attend alcohol education classes for a year. Inevitably, Gibson’s character was also given a dismissal from the show.