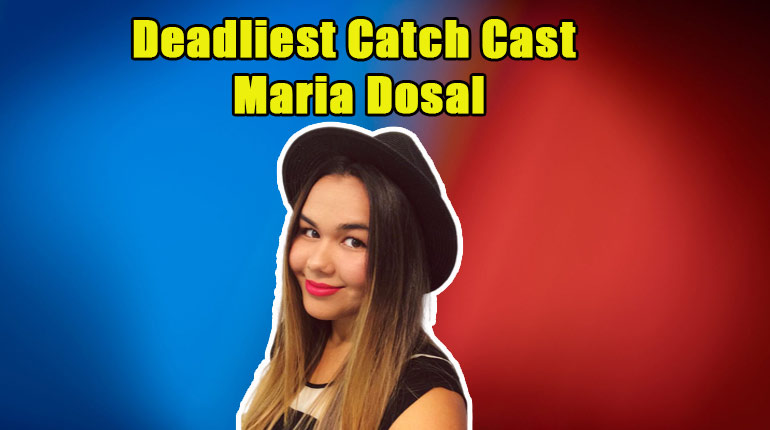 New faces are always welcome among the cast members of our favorite reality shows, especially when the new faces are as pretty and beautiful as the ‘Deadliest Catch’ cast member Maria Dosal. Never before have the casting team behind ‘Deadliest Catch‘ ever let us down; instead, the new members turn out to be great personalities and assets to the job and the show. Now we will discuss exactly who Maria Dosal I through her bio.

Everything about Maria’s dating life that we know of. Who is Maria Dosal’s boyfriend? Find out right here but first a little introduction and details on her net worth in her wiki-bio.

Who is Maria Dosal? Her Life as a Deadliest Catch Cast Member

Maria Dosal is one of the newest deckhands joining the team aboard the Fishing Vessel Cornelia Marie. The Fishing Vessel, which was a fan favorite with the late great Captain Phil Harris commandeering it for most of the initial season. Now, after his death, his son Josh Harris and Casey McManus are the ones leading the charge, and with teammates like Maria Dosal joining, their team is more formidable than ever.

Josh Harris even went to great lengths explaining the merits of his new deckhand, saying, “[Maria’s] a badass chick… She worked on boats for a long time. She knows what she’s doing. She could probably show some of the boys a thing or two.”

The audience also agrees with Josh on this with a flood of comments supporting her amazing chemistry with her mostly male co-stars. She even outshines them all eventually and has the relief that all of the selective few female cast of the show brings to the table.

Maria Dosal, full name; Maria Liliana Dosal being a newbie reality star, has very little out when it comes to her bio, particularly her early life. She is a native of King Cove, Alaska, where she currently resides, but other than that; we have no idea about her bio. Despite not knowing her birthdate, we can say that her age is not over the mid to late 20s.

Growing up in Alaska, there aren’t many geographically realistic professions; meanwhile, fishing is one of the favorite pastimes around the state. It is not that difficult to wonder how she eventually came aboard the Cornelia Marie.

We do have an idea of the type of person Dosal is through her social media activities. We see that she has a ton of hobbies from going skiing and snowboarding on mountains to eventually picking up the guitar and sing in front of small crowds. One thing she really loves to do is form human pyramids of all shapes and sizes with her friends in family.

Whether it is with her co-cast members or any other group of people she hangs out with, you will find her in multiple human pyramids in her social media platforms. A human pyramid is a symbol of teamwork, so; no wonder why she is a team player that has so much chemistry with other stars of ‘Deadliest Catch.’

Maria Dosal becoming a reality star now definitely makes her viable to certain net worth. After all, she is only new to a TV career, but she was no rookie in June 2015, and according to her Facebook, she presently works there as well as onboard the Cornelia Marie. So working on two separate vessels must mean she has a large net worth.

Moreover, she also has work experience with Commercial doTERRA Essential Oils USA as a wellness advocate from 2013 to present. Putting all of that, we sure, her career equals huge net worth, but for now, it is still under review, but we think that it won’t be long before we have a figure. How do you think that she can afford her Yellow Jeep Wrangler she has been taking in all sorts of adventure?

After all, have you seen her lifestyle? When she is not laboring away in cold, harsh winters for a handsome salary, she is always on an extravagant adventure. We expect nothing less from someone who calls herself an adventurer. She goes fishing, hunting, snowboarding, cycling while also eventually modeling for brands like Adidas and Coco Chanel as well as self-designed clothes.

Maria Dosal’s dating life was one of the major things Distractify brought up not even a week ago on their edition of covering all about the new reality TV star. We are thankful that they did as we would not have the information now if they did not. You see, the only dating fling we know of Maria Dosal is looking at her social media history.

We did not notice it at first, but Maria Dosal’s boyfriend first made an appearance in a group photo she shared in December 2017. It is only after she shared a photo of just herself and her boyfriend, Ry MacDonald in October 2018 we would come to know they were dating. Maria was giving him a playful kiss on his cheek, making their relationship clear.

Last May, she would also dedicate another post to her boyfriend, Ry, in the form of a poem. Maria gives us the warning beforehand that it was cheesy, but we think it was more sweet than cheesy.

It read, “You pick me up when I’m down in the dumps, And carry me to and from the truck. You rushed me to the ER when I needed it And kept me properly medicated. I know it’s super-duper cheesy for the gram, But cheesy is what I am.”

He obviously was nothing short of a hero as he was by her side during a vulnerable time of injury. You would think that it would mean that they were one of those couples who would surely become husband and wife in the future. However, while we are talking about their marriage, we think that they may very well already have broken up. All the Instagram posts we were talking about have since been deleted.

Yes, all the Instagram posts, which were proof of their dating life, no longer exist in her social media. Maria would only do something so drastic if they had a break-up.