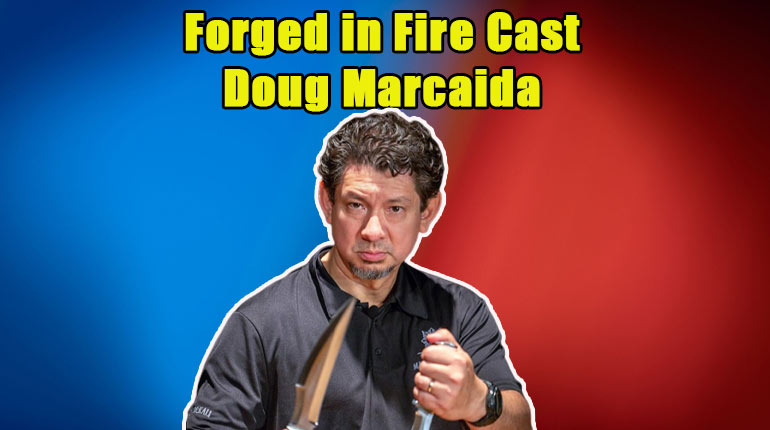 You could know a person for years and still don’t know anything about them. It doesn’t have to be someone you know personally; it could be a celebrity because tons of them are so secretive about their personal lives. They don’t get any more secretive than ‘Forged in Fire’ judge, Doug Marcaida.

You will not have a problem finding one thing or the other about the rest of the ‘Forged in Fire cast, but Doug takes secrecy to another level. Well, Doug has finally met his match. If anyone is debunking the Marcaida’s married and family life, it’s us. So let us get going to learning everything about his wife and children—also, everything else about his biography like his net worth below.

Doug Marcaida is a knife-maker, weapons, and combat expert who is most notably a judge of ‘Forged in Fire.’ He is also a Martial artist who specializes in multiple forms of martial arts but particularly excels in the Filipino-native style called Kali. He is easily recognizable for his iconic way of saying “It will Kill” or more rather “It will Keal” when testing for the practicality and sharpness of the weapons in the series.

Doug Marcaida was born in the Philippines to Filipino parents. His mother immigrated to the USA when he was still at a very young age leaving behind him and his four siblings. He was raised by his father, grandmother, and aunts until he and the rest of his family could also move to America. Marcaida always kept running into fights and other troubles as he grew up.

So, his father gave him the idea to learn martial arts. He began learning to fight because he wanted to be able to defend himself and win in fights. However, with time he began to gain an understanding of the discipline in martial arts, which became his primary focus.

Marcaida has every right to be famous for being secretive as we hardly know the details like his birthdate and age when it comes to his bio. So, we skip right ahead to his career, which began in the military and, more particularly, the Air Force. It was here that he would meet friends who were practitioners of the Kali Martial arts.

Caption: Doug Marcaida is a judge in ‘Forged in Fire.’

Doug, in his teenage years, was afraid of the use of weapons. Still, Kali was a martial arts style that focuses primarily on weapons combat like a knife, stick, and improvisational weapons. However, joining the army and his friends’ skills in the martial arts of his own country made him change his mind. Who would’ve thought back then that he would go on to become a world-famous kali expert?

Doug Marcaida is also an expert knife-maker, which goes without saying considering his role as a judge. Currently, he makes swords for distinctive companies like FOX Knives in Italy and 5.11 Tactical in California. He also runs various sessions and events for combat and knives in both Europe and the USA. We certainly can’t forget his most valuable asset to his net worth, which comes from his role as a ‘Forged in Fire’ judge.

Doug Marcaida’s net worth as of 2020 is around $300,000. A part of his net worth also comes from his YouTube channel, which has over $65.3k subscribers and over 3.5 million views in total. He freely gives away kali lessons and other wisdom as he feels that one day his kids will see it all and understand their father correctly.

Although Doug Marcaida, as we have kept emphasizing, is highly secretive about his marriage and children, it is clear that he is married and has a family. He never shies away from mentioning his wife or children even though he never gives away their identity or other details on them. He did say in his Morning Coffee with Marcaida video series on social media that seeing his wife raise their children made him respects mother altogether to a whole new level.

Caption: Doug Marcaida thanks his wife and all the mothers on Mother’s day

He after seeing his wife understood his mother’s sacrifice of leaving him and his siblings when they were children to come to America to provide her entire family a better life. While we may never know the identity of Doug Marcaida’s wife, we can see that she is a very caring mother and partner. While Doug also does not mention his children’s details, we know that he has multiple sons.

One of his sons does make an appearance in one of his Facebook videos. It is a funny video where he gives his son a special cup. The cup has a unique feature where if you fill it at just the right amount, nothing happens, but if you fill it up too much, and everything pours out. Doug aims to give his son a valuable lesson, but as a rebellious teenager, his son learns something entirely different.

Caption: Doug Marcaida with his son

The video was staged, but it is funny, nevertheless.