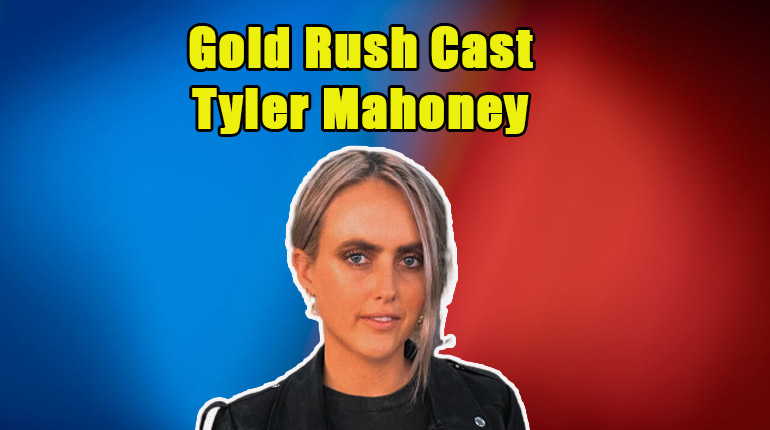 When we say “Gold Rush,” the first thought maybe the Discovery show, but did you know ‘Gold Rush’ actually means the attraction of a large group of people to a newly discovered goldmine or field? Australia may have had its gold rush back in the day in 1851. However, legends are still told about the days, especially with memorabilia like the 98 kilograms, ‘Welcome Stranger’ golden nugget found in 1869.

Fans of Gold Rush got to see Australia’s most prized discovery in gold mining and the world’s largest alluvial gold nugget, or at least it’s a replica in action for the newest season 10 of Gold Rush. However, not all of us are gold fanatics and found the lovely beauty who brought the gold replica to Parker Schnabel and his team, much more fascinating.

So far, you must not know much about this mysterious Australian beauty, Tyler Mahoney. We are here to change that and spill all the tea on Tyler Mahoney, including her net worth, bio, and dating life. This article is not something you should be missing out on.

We don’t know if it was the show’s creators or Parker Schnabel behind the decision to take Gold Rush season 10 to the down under that is Australia, but kudos to whoever had that bright idea. Things don’t get any hotter than Australia, and now thanks to the new local help from the gorgeous Tyler Mahoney, things are bound to get hotter.

Tyler Mahoney is a 4th Generation Gold Miner from Australia who looks more like a model than a gold miner if we are honest. Tyler Mahoney runs her family business in Kalgoorlie, which is just 370 miles Northeast of Perth in Western Australia. She has a gold shop with her family, which buys and sells Gold, but you would most likely find her and her family excavating for Gold.

Tyler Mahoney is like Parker Schnabel’s Australian alter ego who stars with her mother, Lecky Mahoney, and father, Ted Mahoney, in ‘Aussie Gold Hunters.’ Tyler’s appearance in the show began only after season 4 in 2019 while her parents were the show’s cast since season 2, so; it is not surprising to see people struggling to recognize her.

Regardless, she has enough talent and charm to catch the attention of Parker Schnabel and the Gold Rush casting team. At just 24 years of age, she also has many other career ventures, one of which is; The Prospector’s Club, which teaches traditional prospecting techniques to next-generation miners.

Just because a person isn’t famous does not mean that he or she doesn’t have a massive net worth. This proves right for the case of Tyler Mahoney, who certainly has greater net worth than her TV career lets on. So far, you know her either from season 4 of ‘Aussie Gold Rush‘ or the currently running Gold Rush season 10.

Like the most recent Gold Rush’s episode of March 20 is titled, Tyler’s trial, the youngster’s net worth is also under testing, but we know it has to be a grand amount based on her career. In season 4, we saw Tyler Mahoney’s beginner luck able to find some rewarding pieces like two scarce sponge gold simultaneously and a gold ring.

We know luck may not be a net worth deterring factor in other professions, but in gold-prospecting, it is the key. She also has different ventures like The Prospectors Club. Tyler knows how to join philanthropy with a career. She has her own boutique jewelry and swimsuit line, which are built on ending the toxic nature of fast fashion.

Her jewelry and swimsuits called ‘Mae by Tyler’ are both the products of sustainable reuse of plastic and other harmful materials cleaned from the ocean. She models both her products herself, which are created locally in Western Australia. Her looks and fashion sense has also made her a bit of a social media personality with over 15.2 k followers on Instagram. Therefore, Tyler Maloney’s net worth is undoubtedly a decent amount.

Tyler Mahoney’s Dating Life; Does She Have a Boyfriend?

It feels like we are giving a little kid a candy, only to take it away. While we have been going on and on about the beautiful and successful Tyler Mahoney for guys to have a new TV crush, we also forgot to mention a tiny detail. Yes, Tyler Mahoney is taken. She is dating a guy by the name of Jack Lathey.

However, don’t lose all hope yet, boys. We are reporting this on the basis of a simple observation from her social media activity. She looks to be close with only one person in particular who could be a partner, and that is Jack Lathey. Lathey is quite a good-looking guy who flies choppers and has an adorable dog.

Jack makes many subtle appearances in Mahoney’s Instagram and, most often than not, involving romantic captions where she calls Jack “Babes.” Therefore, there is a good chance he is her boyfriend.

We knew Tyler Mahoney was a tough girl the moment we learned about her. The scorching sun just bounces off of her beautiful glistening body as she works in the unforgiving Australian alluvial plains. Her bios can’t stress the fact enough that she can tell the geographical origin of a nugget by merely looking at it. However, what makes her tough is the fact that she injured her legs while surfing.

She was in a cast for three months, with pins all over her ankle. However, her recent posts don’t show her wearing crutches, so perhaps she is fully recovered now.

Tyler Mahoney still appears in season 10 of Gold Rush, so her future with the show is still under review. However, Aussie Gold Diggers have been renewed for a season 5 in which she may return. We hope Tyler Mahoney begins to get more famous, and we get to see her more often.