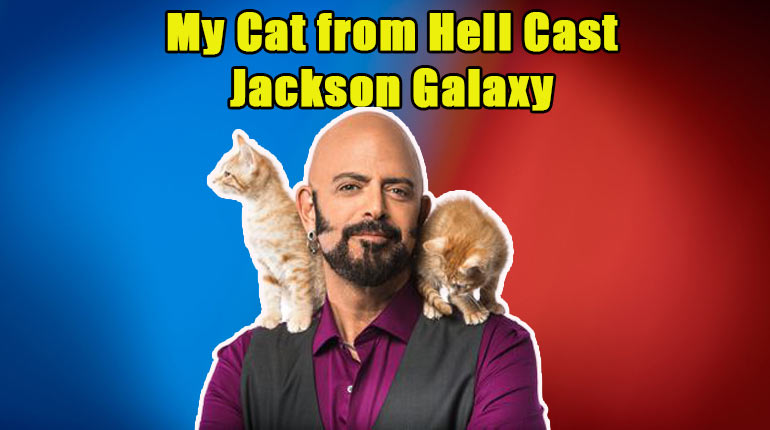 Animals teach us a lot of things, among which communication goes well beyond language. Only a few people can, however, learn the art of communicating with animals; among them is a man famous for his ability to understand cats. We are talking about Jackson Galaxy, of course, and we will be exploring all his career exploits in detail. So, make sure you read this to check out his net worth.

Do not forget to find out all about Jackson Galaxy’s married life. Along with learning all about his other personal life details like his net worth, weight loss, and substance abuse problems.

Jackson Galaxy is a cat behaviorist, entrepreneur, and, most importantly, a public figure as the host of multiple TV shows centering cats. Jackson Galaxy was born as Richard Kirschner on April 28, 1966, in New York City, New York. He was brought up in the Upper West Side of the city in Manhattan and began playing the guitar at the age of 10.

He wanted to become a rockstar in the future, which he did pursue a short while. Jackson graduated in 1991 from the University of Iowa with a degree in theatre. We also know that it was at around the time of his 20s, he changed his name from Richard Kirschner to Jackson Galaxy. He probably did it to have a more fitting name for a rockstar, a career he would pursue in 1992 after moving to Boulder, Colorado.

Jackson Galaxy has taken a lot under his professional wing. While he came to Colorado to become a musician, instead, he found himself working with rescue cats. It all began from the Humane Society of Boulder and then various other cat shelters he was working in. Galaxy, after some time, began to learn a lot about the cat’s behavior, only through observation and experience.

After being able to calm an entire shelter of panicking cats during a massive storm, Galaxy would get the title of ‘Cat Listener.’ All he did was learn that cats slowly blink at other cats and humans they trust and do that exact thing shortly after he began his own practice of cat counseling, Little Big Cat Inc. in 2002 with a partner and famous holistic veterinarian, Dr. Jean Hofve.

Since then, he also has become the President of Spirit Essences, a spirit, and a flower essence remedy line. Since 2007, he has been operating his private consultant company in Los Angeles. In his career spanning almost 20 years, Galaxy has national recognition in his field. He is among the Board of Advisers for Neighborhood Cats in NYC and the Board of Directors for Fix Nation and Stray Cat Alliance.

We sure have built you up quite well to Jackson Galaxy’s net worth, haven’t we? However, you will have to wait a little more to finally learn his net worth as we haven’t even got to his TV career and other high-earning aspects of his life yet.

Jackson Galaxy’s entire career is well respectful, but you don’t know him from those achievements, do you? You heard of him from his TV career. Yes, he is easily recognizable thanks to his famous shows like ‘My Cat from Hell‘ and ‘Cats 101‘ in Animal Planet. He almost hosts the incredibly popular game-show ‘Think Like a Cat.’ He also holds a web series ‘Cat Mojo’ appropriately titled after his own understanding of cat behavior.

Caption: Jackson Galaxy in My Cat from Hell

On top of his massive TV success, Jackson Galaxy is also the author of multiple New York best-selling books about cat behavior and relationship. The name of the books includes ‘Catisfy to Satisfy,’ ‘Catification,’ ‘Cat Daddy,’ and ‘Total Cat Mojo.’ All of these result in Jackson Galaxy’s impressive net worth of around $1 million. He also has many lesser-known ventures such as classes and sessions he provides privately as well, which further secretly boost his net worth.

Jackson Galaxy’s Married Life; Does He Have Kids?

Jackson Galaxy is a happily married man, and he is married to a fellow animal lover like himself. His wife is Minoo Rahbar, to whom he got married on June 29, 2014. Given their background, it is not much of a surprise about how they met. In fact, the location of their holy matrimony was the Best Friend Animal Society, a no-kill pet sanctuary in Kanab, Utah.

Similarly, their ring bearer was one of their dogs, Mooska. Jackson and Minoo do not have any children yet, but they have several other pets. Altogether with Mooshka, they own three dogs, five indoor cats, four feral cats, and two turtles. Jackson Galaxy often dots about his wife from celebrating their recent six years wedding to his following statement about her, fresh after their marriage;

“She’s an incredibly grounding force for me. She doesn’t care about any of the celebrity stuff, she just cares about animals.”

Jackson Galaxy was one of the many people who have had a struggle with food since childhood. The problem would follow him well into his adult life. Many of his fans would also see him gain weight through the course of his various TV shows.

He hit rock bottom at around 400 pounds on weight at 48 years old. His health was becoming a severe health complication back in 2014 that the 54-year-old had to go through a gastric-bypass surgery. Now he has a healthy weight of 275 pounds. He is not just slim now but fit, sporting 6-pack abs and towering at the height of 6 feet 2 inches.

Jackson Galaxy, in the past, was also struggling with addiction to both drugs and alcohol when he still had his rockstar dreams. However, it was his growing love and interest in cats that helped him get over both his alcohol and drug addiction.