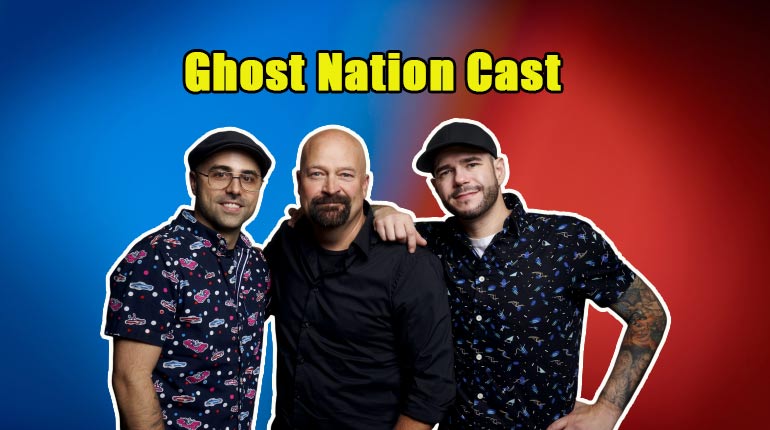 Ghost Nation is the newly revived version of Ghost Hunters, which has its similarities and differences with the previous show. It includes the cast from Ghost Hunters, Jason Hawes, Steve Gonsalves, and Dave Tango. All three of these peoples are paranormal investigators and approach the problem together in their own way to find a solution. While the previous show was about debunking the ghost stories, Ghost Nation is more about helping the family, which has the possibly paranormal problem. Following through to the resolution of the issue as it is being filmed.

Worry not, we are here to calm your qualms as we make you familiar with Ghost Nation‘s casts.

Hawes is considered the pioneer in the field of paranormal studies. He has been active in the area since 1990 and never took a step back. With his reputation as the leading authority in the supernatural and paranormal field, Jason has established an organization called The Atlantic Paranormal Society (TAPS).

Jason was born on 27 December 2971 and is currently 47 years of age. He is a married man with five children. His wife’s name is Kristen Hawes, referred to as Kris. Jason has three daughters and two sons. His daughter’s names are Samantha, Haily, and Satori, and his son’s names are Austin and Logan. Jason’s full name is Jason Conrad Hawes.

Besides paranormal investigation, Jason has an interest in hobbies like fine arts, camping, cooking, hiking, and competitive martial arts. Hawel is also the co-owner of the Spaldin Inn located in Whitefield, New Hampshire. With success in multiple fronts, Jason has a net worth of $3 million, which is pretty impressive.

Steve is an ex-cop who has always been interested in paranormal activities. Famous for being the co-host and investigator in the show Ghost Hunters, he came to Ghost Nation along with his co-star from Ghost Hunters. Besides being a paranormal investigator, Steve is also an author as he publishes the TAPS paramagazine.

Gonsalves other job-detail entail public speaker, host, and producer. He is a public speaker in the topic of paranormal activities, and he has been host in Ghost Hunters series and its spinoffs, even producing some of them. With his wide repertoire, Steve has a net worth of $400k, according to Celebrity Net Worth.

Born on October 23, 1975, in Massachusetts but he grew up in Pennsylvania. Steve is currently 44 years of age but is yet to be married. While he is not married, he isn’t single, either. Gonsalves is in a committed relationship with his long-time girlfriend, Alyce. Alyce and Steve do not have a kid yet but might be planning for one in the future.

Ghost Nation cast Dave Tango also acts as the team’s tech manager, besides being one of the paranormal investigators. Most of the information regarding Dave remains unknown, but what we know is that his father groomed his interest in paranormal.

Dave’s father was a police officer and would share unexplained encounters and paranormal sightings while in duty, with Dave. This piqued Dave’s interest in paranormal activities and magic. He approaches magic as being a problem to be solved instead of mystery, and it is also his serious hobby.

Dave was also a part of the paranormal investigator while in Ghost Hunters, and these three have come together as Ghost Nation‘s cast. Dave is definitely the tech-savvy guy in the show, and fans love him for his curiosity and genuineness.

Born in Linden, New Jersey, on March 20, 1985, Dave is currently 34 years of age. It is unknown if Tango is single or in relation also, nothing about him having children. But, what we do know is that, throughout his time in the field as a paranormal investigator, Dave has amassed a net worth of $1 million. That is hefty net worth and quite an achievement compared to his co-casts.

The new show about paranormal activities in the Travel channel ended its first season after just ten episodes. So, a lot of peoples speculating about the show being canceled, which is not out of place. But, such is not the case. With over 50% of the population in America believing in paranormal activities, the show has a huge audience.

While the show was only moderately received, the reason behind it can be credited to only having ten episodes in the first season. There have been not many reviews about the show on rotten tomatoes either to confirm its popularity. But, neither the Travel channel or any of the cast has commented suggesting the cancellation of the show. Hence, we can say the show hasn’t been canceled but has concluded its first season.

As for the second season of Ghost Nation, from an economic viewpoint, it will definitely come out. The audience of the show has huge numbers, in millions, and a popular show doesn’t just die out. While it might not come out right away.

Probably in October of 2020 is when the second season of Ghost Nation is most likely to come out. With all the episodes being shot during the rest of the year and bringing the show back during the months with holidays like Halloween and Thanksgiving is probably a strategic approach.

Caption: Ghost Hunters returning with Ghost Nation are returning for a new season

But the show itself is a really good source of revenue for the Travel Channel, and hence, the show is more likely to get a second season.

How fake or real is Ghost Nation?

Now, this has been a question raised towards every reality TV show ever. But a show like Ghost Nation begs the question much more and raises more eyebrows.

There is no way of knowing for sure about how much of the show is staged and scripted and how much of it is real as nobody gets to peek behind the camera’s vision. What we can do is take the production team and casts a word for it, who deny the show was never staged.

Ghost Nation‘s casts have clarified in their interviews that they are trying to help families who experience paranormal abnormality in their daily life. So, it is most likely that they are trying to help peoples who have such problems. Jason Hawes claims that his website gets over 100 accesses every day, and some of them genuinely might need help.

In our opinion, the show isn’t staged, but it all depends on the person watching the show. At most, we can share our opinion, but we can’t change anyone’s perspective or opinion.