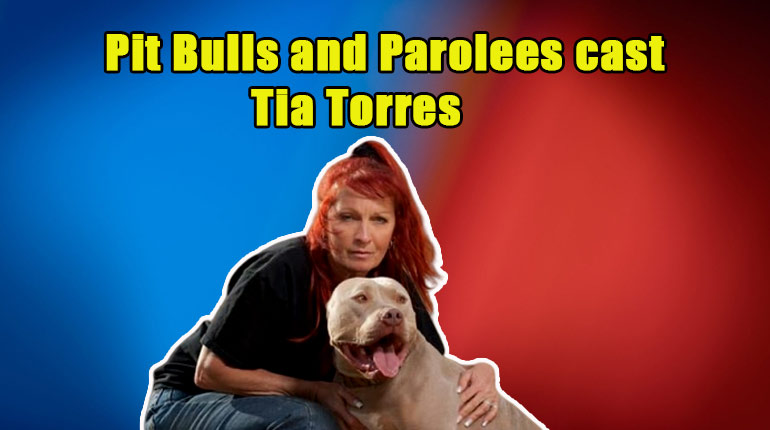 Most people in the entertainment business are not the person we think they are. Most of them hide their personal side of the story while trying to look tough on the television sets.

Tia Torres is among them who is an entirely different person than we see in the sets of Pit Bulls and Parolees. We often assume her to be a rough and tough woman, but is she? Is it an appropriate statement knowing her hard luck in life.

Here are some fantastic things you must know about Tia Torres, her married life with husband Aren Marcus Jackson and children. Also, catch up on Tia’s net worth, and earnings from the show.

Tia Torres (born June 11, 1960), grew up in California, the United States. She grew up being fond of animals from an early age, where she sheltered many stray dogs and cats.

Just at the age of 17, Torres left home with her Catahoula Leopard Dog named Cougar. Also, she had an Angora goat and two Arabian horses.

Caption: Tia Torres and her crew

She struggled to survive as she moved from place to place while finding herself in the streets at times. Soon after, she enlisted as a truck driver in the United States Army.

However, she became a member of a youth gang counselor in Los Angeles. Being a member of the gang is the main reason why she started working on parolees.

In March of 1999, Tia Torres came into the limelight forming The Pit Bull Support Group. The rescue center offered assistance and training regarding Pitbulls at most.

In a fortunate turn of fate, many television producers showed interest in Tia. She featured in the Most Important People in a cover for a popular magazine.

Also, she agreed to host a reality television series named Pit Bulls and Parolees, which is quite an inspiring show for animal lovers.

While rumors are suggesting that Tia Torres married a few times in her life, she is still married to Aren Marcus Jackson.

The couple met in the mid-80s when Tia was helping Aren to find his dog. Meanwhile, fate had other plans for the pair. Little did they know that they would be husband and wife.

However, things have not been great for the two. Tia’s husband, Aren Marcus, was kept in California Penitentiary at the moment. Aren was serving 14 long years sentence in prison.

He was accused of an offensive shootout with the Orange County Sheriff’s deputies. Tia ‘s husband was released back in 2006, and the pair got married soon after.

Aren proved himself as a great husband working through all her endeavors. Also, the couple co-founded an animal shelter named Villalobos Rescue Centre.

While things were turning out to be great for the two, Aren was arrested again in August of 2007. A county detective, Dorsey, accused him of an auto-break in Antelope Valleys and Santa Clarita.

Tia’s marriage came falling apart while the man is serving prison time to date. She is patiently waiting for Aren Marcus Jackson to return.

Tia Torres is a mother to a total of four children. However, she has only two biological daughters while he adopted two sons.

She named her two daughters Tania Torres and Maria Torres. Her adopted sons are Keli’i and Kanani.

Her childrens followed their mother’s path and grew up as television personalities just like their mother. They became part of the Pit Bulls & Parolees cast from a very young age.

The two sons that she adopted are both Hawaiian, and they had a rough childhood. Also, her younger daughter, Mariah, became good friends with her adopted siblings during their school. The two boys had a lot of trouble at home so that they would stay at Tia’s ranch. They worked on the weekends and helped out in different works.

Soon after, they started on the Villalobos Rescue Centre family and that of Tia Torres’. The twins love animals, and they are passionate about motorcycles. The boys have a pit bull named Monster.

There were some rumors about her son’s death in recent times. But the stories turned out to be false as some people misunderstood a different event of her life. All four of her childrens are safe and doing good.

How Much Is Tia Torres Worth? Her Net Worth In 2020

It’s a fact that she gathered a considerable fortune over the years. Tia Torres’ net worth is an outstanding figure of $300,000 as of 2020.

Her primary source of income and salary is from hosting the reality television show named Pit Bulls & Parolees. However, the exact details about her annual income are still under wraps.

Tia Torres devoted her entire life to animals and their rescue. Her love for these animals is just beyond what we think. She is an inspiration for the younger generations to follow her path in the future.

Besides appearing in the reality show, Tia often shares her moments with her pets and all those animals that she rescues. She is a famous personality in social media as she doesn’t hesitate to show off her personal life.