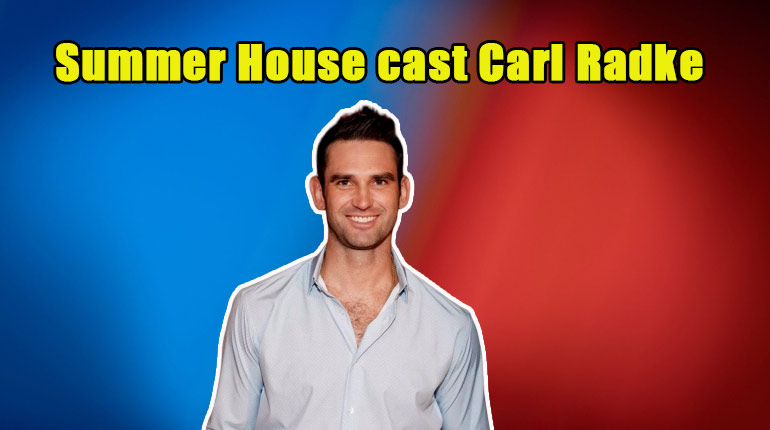 Carl Radke is a cool, handsome, and energetic guy. With his cute smile and charming personality, Carl won thousands of ladies’ hearts as well as massive followers on his social media.

Carl is one of the original cast members of Bravo’s Summer House. In the Hamptons house, he has no problems hooking up with the other members. In season 2 and 3, Carl is a totally different man. Let’s see what the Summer House Season 4 taught us?

Radke is known for his appearance in the reality tv show, Summer House. Carl was born in 1985, January 27. He celebrated his 35th birthday with his family and close friends.

Ths ‘Summer House’ star Instagrammed a photo of himself on his special day with a lengthy caption. He started by thanking his family ad friends who have been with him in his hard times.

Also, Carl added, he struggled with anxiety, depression, and alcohol. Now, he’s trying is live a healthier life and excited for 2020.

Carl has been involved in many industries. He is currently working as a sales representative in medical device sales. Carl graduated from Upper St. Clair High School in 2003.

Then he enrolled at Syracuse University’s S.I. Newhouse School of Public Communications in 2003. Radke pursued a Bachelor of Science degree in radio, television, and digital communication in 2007.

In 2015, he joined the Harvard Business School, where he studied HBx Core and majored in Economics for Managers, Financial Accounting & Business Analytics.

Radke became popular among the people after appearing on Bravo’s series ‘Summer House.’ Carl came to the show through his friend Kyle Cooke. They both appear in all four seasons. Now, the Summer House season 4 is back on Bravo with two new members Jules Daoud and Luke Gulbranson. The premiere on February 5 at 9|8c on Wednesday.

While Danielle Olivera and Jordon Verroi return as the cast members’ friends, what’s really interesting, Carl is living with his exes in the Hamptons house. The trailer shows that the new season is different than the previous ones. It shows, Luke and Luke are hooking up while Carl gets jealous od his ex-girlfriend, Paige’s new boyfriend.

The Summer House Season 4 trailer shows Carl and Lindsay are hooking up. But the question about their relation, Could Radke and Hubbard be getting serious or not? In the trailer, we see that Lindsay and Carl are getting cozy on more than one occasion.

Summer House cast Carl dated his castmate Paige DeSorbo in the previous season. From the beginning of the season, Paige and Carl have feeling for each other.

Unfortunately, as the season end, the two split up, and now, Carl is single, but Paige has a new boyfriend, Perry Rahbar, who is a businessman. Moreover, he dated ex-girlfriend Lauren Wirkus, who is one of the cast members of the Summer House.

They have an on and off relations in season 1 and got back together in 2018, but it didn’t last long. He also hooked up with Vanderpump Rules star Scheana Marie for a short time.

Carl and his friend Kyle Cooke are partners of a food and beverage company called Loverboy that based in New. The company was founded in 2018. He joined the company in July 2019, and since then, he works as a sales business development.

Now, he is living the life that he always dreamed of. The Summer House star shared a post on his Facebook profiles. In the post he wrote, Carl joined the company and ready to work with it. Additionally, his co-star, Amanda Batula, also joined him and Kyle.

If you want more about the company, you can also visit their website.

How Does Carl Radke Make His Money?

Carl Radke is a multi-talented person. He is a sales representative and a former model. After graduation, he landed his first job as an assistant for Criminal Minds at Disney ABC Television Group in 2007. H worked there for 1 and 9 months.

In season 3, he became unemployed after he didn’t make quota from the Summer House. Radke even took a break form a party to focused on his work. After leaving his job in orthodontic sales, he worked for Yotpo as an account executive and Spotfund Technologies as a senior advisor for more than a year. It is a mobile nonprofit fundraising platform designed especially for brands, influencers, and publishers.

In addition to his career, he co-hosts a podcast, One Question XYZ, along with Dalia Strum and talks to industry professionals about their success and failure stories. However, Carl Radke hasn’t revealed his salary publicly. Carl’s net worth is believed to be around $1 million.

Also, he’s has invested funds in multiple businesses, and it’s clear that he makes pretty impressive money from that ventures.

This handsome hunk is very much active on all social networking sites. To no surprise, you can find Car’s Instagram account under the username “@carlradke,” where he has over 140k followers.

On his Instagram bio, he simply states his hometown and his profession. Also, he wrote a few lists of his current projects.

Carl Radke Relationship with His Mother

If you scroll through his Instagram, you might have noticed, the only lady that featured again and again. And of course, that lady is none other than his mom.

Carl took to Instagram and posted a picture of his mother and him. He captioned it, “Happy Birthday, MOM.”

On Mother’s Day, he shared a throwback photo with his mom with a heart-touching message.