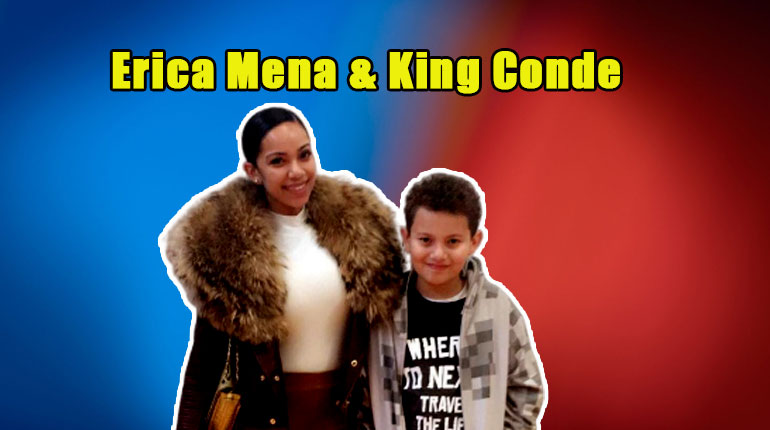 The music and entertainment industry has its pros and cons, while some stars tend to be over assertive with all their fame and fortune. Well, it’s often the same story when relationships don’t tend to last long.

Erica Mena had her share of ups and downs while growing up in a harsh environment. Despite being a proud mother, “Love & Hip Hop: New York“ star is pregnant with her second husband, Safaree Samuels.

From fighting with her child’s father to dating an endless line of men, Erica featured her feisty sides much often. Here are some surprising facts about the gorgeous model, Erica, and her dating history till now. Also, find out about her son King Conde and her new husband as well.

Erica Mena’s first son King Conde; Who is he?

Erica Mena is a former model, recording artist, and a famous personality from LHH. Mena got pregnant with her first baby at the age of 18 with rapper Raul Conde. She gave birth to her son, King Conde, on March 1, 2007.

Erica was 19 years old while she gave birth to King. However, the 13-years-old boy prefers to stay behind the shadows of his mother in social media.

King tries to avoid the limelight while we don’t have many looks on his personal life a lot. But what we do know is that Mena spends a lot of time with King while providing his needs.

Also, we don’t see Raul in the pictures much at all with his son King. Also, King Conde belongs to an American nationality following Christianity as religion.

King Conde has no interest in social media, unlike any other kids of his age. Erica has to ask his permission before posting any picture or video of him on Instagram.

King even accused the social life of being corrupt and malicious. Erica posted a video of King and herself with a post that attracted many viewers on her Instagram account.

The famous television personality was in a relationship with Raul Conde. The rapper is a member of a group named “Terror Squad” and the director of many music videos. However, the couple never had the perfect love life despite being married and having a child.

The two were mostly known for a heck of an abusive relationship. But keeping that aside, the couple stayed together for almost a decade. Erica and Raul started dating since 2004 while breaking up back in 2016.

Mena said that Raul was physically abusive, which was the only reason for their breakup. But she was also in love with the man, so she decided to adapt to his behavior whatsoever.

When things got totally out of control, Erica got tired, and she left the man while having the full custody of their son after the split. In the meantime, the couple made amends for the sake of their son as they finally stop an end to this war. However, they have not spent much time together despite the conflict being under wraps.

There was a time when the couple had a violent brawl in the streets of Miami. Erica and Raul fought one another in front of the public mass, which was quite a shocker at the time.

As seen in the video, they had some nasty spats at each other while saying some disturbing things as well. From what it looks, Raul was neither a good dad nor a responsible partner.

Erica was vigorously punching and kicking Raul Conde, which happened in front of a studio. The television star was chasing Raul while we witnessed a violent and aggressive side of Mena.

Erica Mena is among the very few who found two men to put a ring on her finger. Despite being in her early thirties, she is very popular for her dating affairs and love life.

Erica and Safaree started dating from 2018. Safaree is also a famous rapper who dated Nicki Minaj in previous times. The couple got engaged stylishly.

We could see that Safaree made some fascinating preparations while he proposed Erica. He designed the ring and selected the center stone himself. Besides, he sneaked to get Erica’s finger size while sleeping to ensure the best proposal in her life.

Nevertheless, she showed off the expensive ring on her Instagram. The 14-carat platinum ring costs around $175,000.

Recently, in October of 2019, Erica Mena and Safaree Samuels tied the knots while King Conde walked along-side her down the aisle.

The rumors about Erica Mena’s pregnancy had spread for a long time. She continued denying the news about her pregnancy with Safaree Samuels.

Safaree is freaking out, for he is going to have his first baby. He also said, “I’m in shock. I’m in disbelief. It’s very surreal to me. I don’t know what to do, but I know I’m going to be great at what I do because I’m great at everything.”

Its baby number two for Erica, who is expecting a baby girl with Safaree. No wonder what they would name their bouncing bundle of joy.

On the other hand, what will King think of his sibling, sister? Well, there are many questions still to be answered.