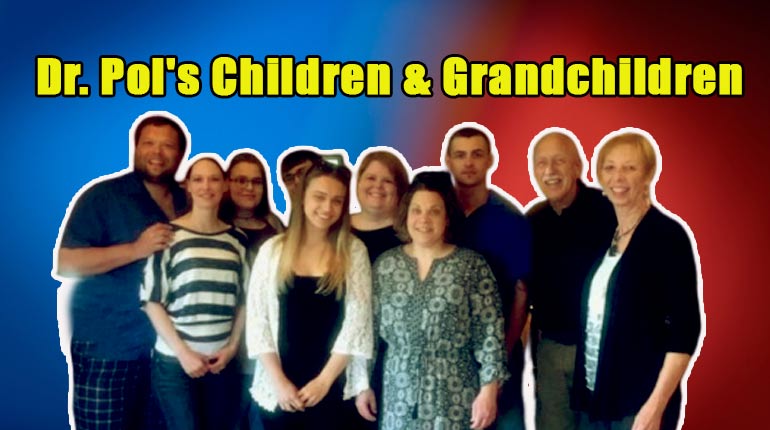 If there was ever a celebrity who would ever be the real-life version of the grandpa or old man emoji on our phone, it would have to be Dr. Jan Pol. Not just by appearance but Dr. Jan Harm Pol is by far the most father and grandfather figure we know from TV.

He is wise, kind, and has a dad-like sense of humor, which makes him the perfect dad, but don’t take it from us.

Dr. Jan Pol is an example of a dream that is quickly dying nowadays, which is the American dream. He came from the Netherlands, for his wife, Diane Pol, and made a respectable name for himself among the veterinary world and animal lovers around the country.

While having over 20,000 clients from around the country come to his small Michigan clinic and starring in a hit Nat Geo reality documentary series is impressive enough, his real achievement has been establishing a healthy and lovely family. His family composes of his three children. All 3 of the Pol children are adopted, but no one would suspect it if they have ever seen the family in the show.

Kathy Pol was the first daughter they adopted and then their son Charles Pol. They would also go on to adopt Diane Pol Jr., who they fostered for years. Want to know how many grandchildren Dr. Pol has through his children. Read about them below;

Kathy Pol is the first daughter they adopted from her birth on August 21, 1973, as Kathleen Pol. Kathy is currently 46 years old. She grew up in her parents’ farm is a graduate from Chippewa High School in Remus, Michigan. She currently resides in the Bay City area of Michigan, where she works as a phlebotomist in the McLaren Bay region.

Kathy, who has a net worth of approximately $1 million, married her longtime love Gregory Butch in July 30, 1995. They spent almost 21 years of married life, happily until her husband’s untimely death on February 20, 2016, at the age of 50. He is survived by not just Kathy but their daughter, Rachel Butch, according to his obituary.

The couple also had a son together, Adam James Butch, who soon followed his father just a few years later on September 18, 2019. According to his obituary, he was only 23 years old at the time of his death in his home. He was working at Rite Aid Pharmacy as a technician. To lose a husband is heartbreaking enough, but to also miss a son just a few years later is a pain we can’t comprehend.

Our heart goes out to Kathy Pol for bearing such back to back tragedies.

Charles Pol has been emerging more and more in the recent seasons of ‘The Incredible Dr. Pol‘ making him even more famous. However, as the executive producer and the idea pitcher of the show, Charles Pol is easily the most popular of all the Pol children. Charles Pol has a net worth of $1 million, which is equal to that of his father, who also has about $1 million net worth.

He frequently appears on the show, so you know most about his career. Despite having a good experience in treating animals with his parents in his younger years, Charles Pol had dreams of a career in TV production. With supportive parents like Dr. Jan and Diane Pol, he had nothing holding him back.

He worked with names like Paramount Pictures and Mirage Enterprises before working for Nickelodeon, where he had the million-dollar idea of making the TV show about his father’s profession as a vet. Would Dr. Jan Pol have ever known when adopting Charles Pol during his birth on March 6, 1979, in Central Michigan that his son would one day make him a star?

Charles Pol has undoubtedly made his father proud, and now he himself is a proud dad. After getting married to Beth Oakes, his longtime girlfriend in 2018, the couple would also welcome their baby daughter, Abigail Pol, on October 29, 2019.

Diane Pole Jr.’s full name is Diane Louise Pol Jr., and she is the only one of the Pol children who was not adopted at birth. Instead, she first came to live with the Pols when she was only eight years after her mother Joann passed away, leaving her and her sisters without a parent to look after them.

The 45-year-old’s mother was a close friend of her adoptive parents, Jan and Diane Pol. Thus, after fostering her for ten years, Dr. Jan Pol and his wife Diane adopted her when she was 18 years old.

Yesterday my birth sisters and I remembered our momma JoAnn, as always. JoAnn died in 1982. It may have been 37 years ago, I may have been adopted by her best friends, I may have turned out OK, however you never forget your mom. Love Always.#DianeJrsJourney #RemeberingMomma pic.twitter.com/dxvxBJU8q8

So, despite being the last of Pol’s adoptive children, she is the oldest being born on March 27, 1973, by not even a month older than Kathy. Both she and Kathy will be turning 47 years old in 2020. She is neither married nor has kids. Well, she does have three cats, two of which are Misti and Destiny, who are like her children.

Diane Pol Jr. has had a rough past dealing with issues of obesity. We don’t know the details of it, and frankly, we don’t want to focus on the negatives of her past. Why do we have to when she is making positive changes in her present and future? Diane Jr. has been in a journey of weight loss and over the years, slowly but steadily is reaching her desired healthy weight.

In September 2019, she gave us an update about her weight loss journey. She had lost 70 pounds since last year and a total of 155 pounds from her initial weight. She still hopes to lose 80 pounds more for her desired body, and we have full trust in her that she will be successful.

These were as much as we could find on the children and grandchildren of Dr. Jan Pol and Diane Pol. Were we right or not when we said Dr. Pol was a perfect parent and grandparent? He must be one proud man to have been the leader patriarch for such a beautiful family. We hope his family continues to grow and become even happier if that is also possible.