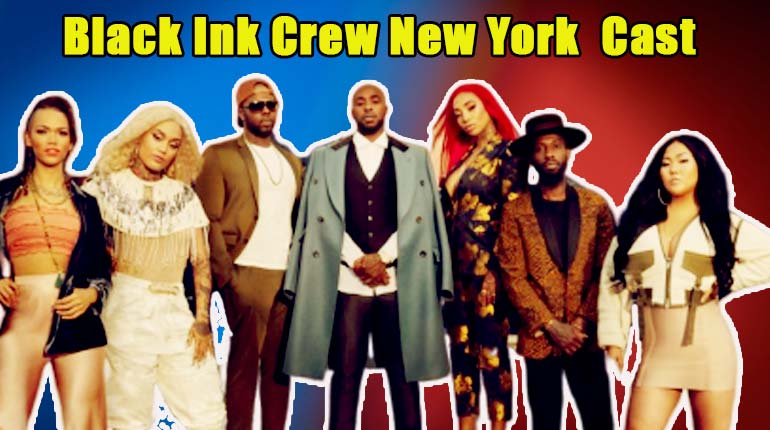 Reality TV shows have become an excellent platform for those individuals who want to achieve both fame and fortune. Many people who have appeared on such reality shows earn recognition and a decent sum of money.

From their outstanding performances, they have captivated the heart of their viewers and audiences alike. The following article is about various Black Ink Crew New York Cast member’s individual bio, which describes their net worth and several more details related to their life.

Her real name is Cristina Lavielle Lattimore. She was born on 25 February 1984 in Lincolnton, North Carolina. Before settling in the show as a tattoo artist, Christina was a model.

She is also a highly educated woman as she holds a degree in Business Management. Also known as Dutchess Lattimore, Cristina’s net worth is at $800,000. Her massive salary from the reality series and other ventures has not been officially disclosed.

Christina had an on and off relationship with her ex-boyfriend, Zach Sanchez. As of now, Black Ink Crew’s star, Cristina Lattimore, is currently single. It can be said that she is the female lead of the Black Ink Crew: New York cast.

Paul Robinson, also known as Puma, is a party freak. Born on 13 February 1982 in New York, Paul’s is Emmauel’s closest friends. Even though he took a break in the fourth season, he stills makes a guest appearance on the show alongside his lovely wife, Shaquana Robinson.

Before working alongside his best pal, David Emmanuel, also known as Ceaser, Paul worked as a Public Relations Manager at Art 2 Ink Tatto Studio, Paul also has got a daughter, Tamia.

His salary from the show is still under review. However, as several sources, Paul Robinson’s net worth is $150,000. You can catch up with him in the currently running new season of Black Ink Crew, NY.

David Emmanuel, famously known as Ceaser, is the main leading man of Black Ink Crew. He is a remarkable businessman and a philanthropist. Furthermore, David is the founder of a tattoo shop in Harlem, New York. Ceaser is the brain behind the show.

He was born on the 5th of June 1978. As the owner of the first famous Afro-American tattoo parlor, David Emmanuel has an amassed a net worth of $2.2 million.

The father of a daughter named Cheyenne, David Emmanuel, also had romantic flings with fellow cast members, Dutchess Latimore and Karlie Redd. As of now, the heart and brain of Black Ink Crew, David Emmanuel, is single. He has been one of the very few leads which are still a member of the Black Ink Crew Cast still appearing in the show’s new season.a

At present, he is residing with his wife, Nikki, and five kids in Atlanta. His wife, Nikki, has a son from her previous relationship. Similarly, Richard has three daughters from his three baby mamas. Likewise, Duncan and Nikki have a daughter, Nova Rae Rose.

Alex Estevez was born on 14 February 1987 in New York. She was a receptionist and was seen on the show for the first two seasons of Black Ink Crew. Her exit was full of drama. She filed a lawsuit against the show’s production with a one million dollar suit.

Her lawsuit went nowhere; hence, she was forced to drop the case as no one was willing to take up her calls. After quitting the show, there is no further information about her. So, it is difficult to evaluate her net worth or her relationship status.

Sassy Bermudez began as a leading cast member Black Ink Crew for the first three seasons. However, she made recurring appearances in the fourth season and finally left the show in the fifth season.

Her birth name is Ashley Nicole Bermudez. She was born on October 18, 1990. Ashely came out publicly as a lesbian after she was spotted having a romantic relationship with her girlfriend, Danyelle.

Ashley Nicole is a member of the LGBTQ community. On the show, Nicole had formed an intimate relationship with fellow cast member Didi.

Currently, she is single and works as a manager at Art2 Ink. Ashely is a part of the popular LGBT community and has featured as a model in several magazines.

Ashely Nicole’s net worth is still under review.

Sky Day, whose real name is JaKeita Days, is a receptionist of Black Ink Crew. She has also acted in the movie, Scared Famous.

Most of Sky’s fortune comes from the reality show, buther career as an actress in the movie Sacred Famous must also play its part.

Known for her loud and outspoken behavior in the show, Sky was born on September 19th, 1983, in Harlem. At the age of only 14, she was already the mother of two sons. This forces her to give her sons for adoption as she was too financially weak to sustain them.

But now, she is earning good money. As of current recording, Sky Days’ net worth is $4 million. She is one of the best-paid celebrities in the show. Furthermore, Sky makes $7000 per episode and earns around $91K from the show.

With her accumulated net worth, she is enjoying a great lifestyle and trying to reach out to her boys. She is emerging to be even more popular as she is another original member who will be continuing her appearance in the new season.

Teddy Ruks is the first cousin of Ceaser. His real name is Ted Shariff Homer. He was born on 26 January 1983 and is one of the prominent cast members of Black Ink Crew.

Ruks is also the assistant manager to his cousin to Cesaer and has a net worth of $350K.He has amassed such a fortune from the show.

Concerning his relationship status, you can say he is quite a hit with the ladies. For instance, Teddy had three women named Ashely, Sky, and India falling and fighting over him. As of now, he is in rumors of dating an Asian woman having an Indian origin.

Donna Lombardi, also known as Taylor Monet Pink as a recurring member of the show. However, after a couple of seasons, she was made the leading cast member of Black Ink Crew at the end of season three.

She was born on 20 September 1992. Donna is a tattoo artist and loves her body pierced. Her sister, Britney, is a nurse.

Donna is a married woman. She got married to her husband, Maxwell, in 2016, but later, the pair broke up. Nonetheless, Lombardi is also a mother of two children and currently single. On the other hand, Donna Lombardi’s net worth is $2.2 million.

Melody Mitchell was born on 16 July 1988 in Florida. A life long devotee of the art of tattoos, Melody is known as a dreamer for pitching numerous ideas for putting ink in the show.

She is currently in a relationship with her boyfriend, Lalo Yunda, also a tattoo artist by profession. Together, they have a son, Kai, born in the year 2013. One of her wishes to make her set up her own tattoo business.

Walt Miller was born on November 23, 1981, in Harlem, New York. He had a rough childhood day growing up in the sturdy Harlem hood.

His life finally came around and took a positive turn when he got the job as a Ceaser’s assistant manager. Intially, Walter Miller was not up to the task as he was fired when he could not fulfill the expectation of the job. However, Cesare’s cousin Teddy helped him to get back to the position.

Later on, during season six, Ceaser made him one of the main cast members of the show after he worked on and improved his skills. He is also a professional photographer and has a net worth of $50,000.

Even though he was not keen in sharing his family details with the public, however, it is revealed that he is a married man and has three children.

Young Bae became the leading cast member of the show since season six. She was born on 26 February 1984 in South Korea. Young had a tough childhood time as an abusive father raised her. To escape poverty and her father, she moved to the USA in 2007.

Upon graduating from Chungye University, she opened her tattoo shop, Diamond tattoo, which is located on 4th street in Times Square.

As of recent recording, the South Korean artist is in a relationship with her fiance and boyfriend, Bobby. The couple also has a baby boy together.

Her real name is Kit SoVain. She was born on 28 February 1992 in Washington, DC. Miss Kitty is an energetic receptionist of Black Ink Crew.

While growing up, Kitty wanted to become a professional make up artist. Miss Kitty has made her name in the TV world, yet she has the details of her personal life under warps.

Miss Kity’s net worth and relationships remain a mystery.

Who has Left the Show? Black Ink Crew

There are several members who have left the Black Ink Crew cast. Some of the cast members have left according to her own choice, while others have left due to controversy. The principal cast members of the show, such as Cristina Lattimore and Sassy Bermudez, have left the show from season six and five, respectively, by their choice.

Former cast members like Alex Estevez filed a lawsuit against the show’s production with a one million dollar suit. They quit the show after season 2. Similarly, Black Ink Crew’s primary member, David Emmanuel, had also found himself into quite a difficult situation when he got sued for $1 million by Alex Robinson, a fellow cast member of the show.

The incident occurred in Oct 2018 when, as Robinson claimed in the show that while attending Young Bae’s wedding ceremony, he was assaulted by Emanuel and his cousin Teddy Ruks.

Furthermore, the alleged victim, Alex said that he suffered permanent pain and disability from tendon and ligament damage to his back. Moreover, David Emmanuel has his troubles with the law and got arrested by the cops for unable to pay child support money and getting pulled for running a red light and other traffic violations.