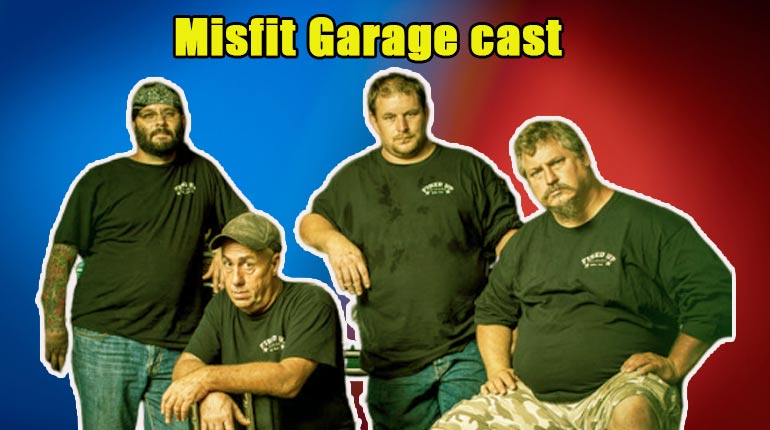 Misfit Garage is a reality TV show which features several mechanics who have previously worked with famous Richard Rawling’s Gas Monkey Garage and joined together to create their very own workshop to compete against Gas Monkey. The series premiered on 13 October 2014 on the Discovery channel.

The show is a treat for many car lovers who want to know what goes on the life of mechanics who prepared, restored, and make for so many fantastic cars. So car enthusiasts get ready to know more about the Misfit Garage cast main members through the following paragraph, which also includes their net worth and so on.

US-born citizen, Thomas Weeks has not officially opened up about his personal life. However, we here assume that he must be in his fifties.

He had a keen interest in cars since his early childhood days. His father was a mechanic and a military officer. Thomas’s father got him a two-door red 55 Chevy when he was only 15 years old.

One of the recognizable faces of Misfit Garge cast, Thomas Weeks, has earned a tremendous net worth from his successful career as a car businessman and renowned TV personality. As of recent recording, Thomas Weeks’s net worth is at $800,000.Likewise, his appearance on the Misfit Garage has enabled him to grow his wealth significantly. Thomas receives $25,000 per episode from his show, Misfit Garage.

Moving on, Thomas Weeks is a happily married man. He and his wife, Michelle Migi Weeks, have been married since November 1997 and together have two children, a son, and daughter, Jeanna Weeks. Thomas Weeks’s wife, Michelle, has studied nursing from Paris Junior College, Texas.

Interestingly, Thomas’ daughter, Jeanna, is also following in the footsteps of her mother and working as a nurse in Texas. As of now, the happy family of Thomas Weeks resides in Texas. He spends good quality time with his family in spite of his hectic schedule.

Born in Ohio, Tom Smith’s real age has not revealed as of yet. However, he spent his early childhood days in Georgia with his family. Tom had an ideal childhood time as he got the third place at the local state spelling bee championship.

While growing up, he became fond of cars. At only 1o, Tom worked on numerous cars at his uncle’s house. Upon graduating from high school, he moved back to Ohio and became the owner of an auto shop in the town.

On the other hand, Tom Smith’s net worth is $500,000. Ever since joining the show, Misfit Garage, his wealth has considerably increased with the popularity of the show. As per several reports, Tom obtained $17,000 per episode of the show.

Nonetheless, Misfit Garge star, Tom Smith, is currently single and unmarried. He was previously married to his ex-wife, Deanna Whetsell. It is not known when the pair tied their wedding knot and got separated. Similarly, like the couple relationship, the details of their children to whom they share custody between them following their divorce is not known.

In spite of their separation, Tom has helped his ex-spouse going through nurse school. Furthermore, he also takes good care of their children on the day by working on the cars during the night time.

Jordan Butler celebrates his birthday on 22 January every year. His actual birth year is missing. He is a Texas native. Jordan has kept his parents and siblings details under wraps. But like many people on the show, Misfit Garage, he has been in love with cars since his early childhood days.

Upon graduating from high school, Jordan went to Wild Tech and received his degree in street rodding, auto body collision, and fabrication.

He has accumulated net worth, which is estimated to be $600,000. Moreover, Jordan Butler earns around $22,000 per episode from the show, Misfit Garage. Furthermore, his other source of income also comes through his car’s restoration shop known as Fired Up Garage, which he operated along with fellow car mechanic, Tom Smith.

Both Jordan and Tom Jordan are masters for restoring old and vintage cars on the show, which includes 67 Chevrolet Camaro57 Chewy, 65 Ford Mustang Fastback, and many more. As of now, Jordan has quit the show. Currently, he is working on Discovery Channels show Fast N Loud.

Nonetheless, the former Misfit Garage cast member, Jordan Butler, married his longtime girlfriend, Megan Risberg, on 30 June 2018 in Royse City, Texas. Before their wedding, the couple got engaged on 25 December 2017. Jordan’s wife, Megan Risberg, is a housewife and beauty consultant.

The pair also shares two children. As of now, the cute family of Jordan Butler is enjoying a happy and harmonious life and often enjoys the weekends together.

Born in Texas, USA, Scot Mcmillan birthdate and family background remains a mystery. However, he had a fondness for a mechanic since his early childhood days.

At only eight, he built his first project, a coffee table by using only mills, saw, and lathe. As per sources, his father is an expert fabricator, whereas Scot’s stepfather and uncle were mechanical engineers.

Being one of the lead Misfit Garage cast members, Scot Mcmillian has got a lot of success from the show. At the time of his recording, his net worth is $400,000.Likewise, he received nearly 22,000 per episode from the show.

Going forward, Misfit Garage star, Scot, is living a happy married life. He is married to his wife, Nikki Mcmillian. The couple is also blessed with two children, Cole and Scott III. Further information about their children is under review as they kept the details under wraps.

Similarly, nothing much is known about his wife, Nikki, and he rarely shares information about his private life through numerous online sites and media outlets.

Richard Rawlings is a businessman and reality TV personality. He was born on 30 March 1969 in Texas and raised in Forth Worth, Texas. Richard’s love for the car began when he was very young and started buying cars and reconstructing them when he was only 14.

Rawlings got his high school education from Eastern Hills School and worked as a paramedic, firefighter and law enforcement officer before making a name for himself in the automobile business.

Hence, it comes as no surprise that Richard Rawlings has accumulated a considerable sum of fortune from his TV career and business ventures. Known for his empire based on Gas Monkey Garge, Richard has obtained the net worth of $10 million.

Moreover, his monthly earnings from his several investments are at $150000 and receives $22,000 salary per episode from the show, Misfit Garage. Likewise, he also gets a significant amount of income from the show, Fast N Loud.

On the other hand, Richard Rawlings has also seen his fair share of ups and downs in his married life. He has been married thrice in his life. Rawlings’s first marriage was with Karen K. Grames, with whom he tied the wedding knot in 1993, but only after a year, they divorced in 1994.

After this, he went to married Suzanne, from 1999 before divorce in 2009. Later, he remarried in 2015. Eventhough there is no confirmed news of his children, but Richard once said in an interview that he has kids.

Like any  TV show, ‘Misfit Garage’ also has its own story regarding the controversy and many others. For instance, Misfit Garage seems to lose a large number of employees, with many mechanics and co-owners, leaving the show on some point.

Likewise, the show’s founders Jordan Butler and Scot Mcmillian, have quit the show without even looking back. However, it was Kevin Clark who made the most controversy when he decided to leave the show due to the amount of drama that surrounds the show. Furthermore, Clark claimed that it is time to move and walked out of Misfit Garge without a care in the world.

Similarly, like any reality TV show, Misfit Garage is also a reality TV show, elements from the show are embedded with heavily scripted talks and conversations as well-staged scenes created beforehand.

Like always, arguments that arose between the cast and Richard Rawlings are said to be faked to attract more viewers and gain more TRP. Also, it has even been told that the majority of the mechanical issues are also false to make the show more entertaining. However, producers treated the show as a soap opera than an actual car show.

Misfit Garage is the spin-off show of its much more popular brand, ‘Fast N’ Loud.’ So, it may be famous in its regards, but it still lacks to be the hit show among many other competitive reality shows. But still, it has its fair share of die-hard fans, fans who are always curious about when the Misfit Garage Cast will return for a new season. It is a very complicated task to pinpoint, new season, and details about the show.

Even it’s Wikipedia page only contains information until only its 4th season. However, real fans know the show has delivered eight hit season, so when in the new season or season 7 of Misfit Garage coming. Several sources have said that it will arrive in the Spring of 2019. One source even tells us that it will premiere on May 2 of 2019, but we are still waiting to verify those pieces of information. Be sure to return to us when we do have more concrete answers and details for you about the Misfit Garage new season.