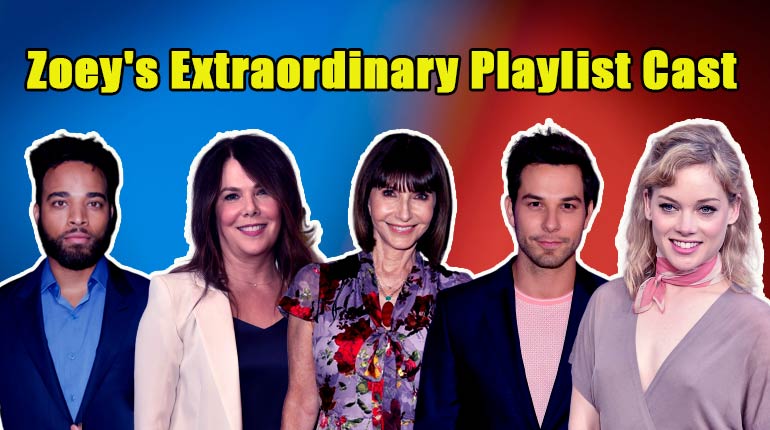 Fans od the musical drama might be missing the popular show like ‘Glee’ on their screen. NBC network is presenting a new musical drama series “Zoey’s Extraordinary Playlist,” premiering on 7th January 2020.

In the series, we will get to see some wide collection of songs like Jonas Brothers’ Sucker,’ and DJ Khaled’s ‘All I Do Is Win.’ The drama’s lead character name is Zoey Clarke, a smart computer operator. When she goes for MRI, the equipment malfunctions and develops psychic abilities inside her, she has the power of hearing everyone’s innermost thoughts and the desire of the popular songs.

Read on to get the detail of each cast of Zoey’s Extraordinary Playlist.

Jane Levy is an actress who is popularly known for her roles in Suburgatory, Shameless, and What/If. After landing different roles in many tv-series and movies, now, she plays th titular role as Zoey Clarke in the upcoming musical drama series ‘Zoey’s Extraordinary Playlist.’ Zoey is a smart, charming computer programmer who lacks the confidence to go for what she wants.

Jane was born in 1989 in Los Angeles, California. She celebrates her birthday on 29th December. She attended Gaoucher Collegenut dropped out and enrolled at the Stella Adler Studio of Acting to pursue her career in the acting field. Jane moved to New York City. She got a lead role in her career in the series ‘Suburgatory’ and eventually climbed the ladder of success.

The Suburgatory actress is probably single and focusing on her career. Previously, she was married to ex-husband Jaime Freitas from 2011 to 2013. Jane Levy’s net worth is $3 million as of 204. Her net worth for 2020 is still under review, but her projects over the years, as well as the most recent one as Zoey’s Extraordinary Playlist cast, must mean it has grown significantly.

Skylar Astin made his name by himself in the entertainment industry. Astin is best known for playing the role of Jesse Swanson, the musical franchise movie “Pitch Perfect.” Now, Skylar will be landing the role of Max in Zoey’s Extraordinary Playlist. The actor has amassed over 1 million followers on Instagram, and his Insta bio, he wrote, “But what I want to do… is a dance.”

Born on 23rd September 1987, in New York City, Skylar Astin Lipstein’s age is 32. Additionally, Astin studied at the Tisch School of the Arts at New York University. He began his career with a minor role in the original Off-Broadway production as Georg. He also voiced the character of Branch in the TV series’ Secret Society of Second Born Royals.’

Astin was married to his co-star Camp from 2016 to 2019. The estranged couple filed for divorce, citing irreconcilable divorce. The Pitch Perfect actor’s estimated net worth is $1 million.

Peter Gallagher, 64, will be playing the character of Mitch in Zoey’s Extraordinary Playlist. He has spent his 40 years in the film industry. Peter gained attention pf the viewers after playing the role of Sandy Cohen in the drama series “The OC.” He had a recurring role as Deputy Chief William Dodds on Law & Order: Special Victim Unit.

Gallagher first appeared on Broadway in Tom Stoppard’s “The Real Thing.” Then he made his debut in the film ‘The Idolmaker.’ Peter gained promience through his role in the 1989 movie ‘Sex, Lies, and Videotape.’

Aside from his acting, Peter released an album titled “7 Days in Memphis” in 2005. The OC actor has been married to wife Paula Harwood since 1983. Also, they have two children named James and Kathryn. Peter Gallagher’s net worth is $8 million.

America actor and singer, Alex Newell is famous for playing the character of Unique Adamz in the musical drama series “Glee.” He is the first openly transgender high school student o American television. Luckily, you will see him playing as Zoey’s friend and colleague, Mo, on NBC series “Zoey’s Extraordinary Playlist.”

Newell earned his first movie role in the comedy Geography Club in 2013. As Glees ended, he is focusing his career in stage and recording. The Glee actor released his EP debut “Power” in 2016. Also, the actor worked with big names such as Clean Bandit, The Knocks. The 27 years actor is single and not talk anything about his personal life. The net worth of Alex Newell is said to be around $1 million.

John Clarence Stewart lives in Harlem, New York. By profession, John is an actor, singer-songwriter, and writer. According to the IMDB profile, John is a storyteller whose mission is to tell the truth.

Stewart came to limelight after appearing in the TV series ‘Gotham’ as an Officer Griffin Katz. John Clarance is ready for the new character as Simon in the series Zoey’s Extraordinary Playlist.

John neither discloses his net worth nor opens up about his personal life on the camera. It seems he likes to keep his info to himself.

American-born actress Lauren Graham, 52, rose to fame in the 2000s series “Gilmore Girls,” where she played the character of Lorelai Gilmore. Since then, she established herself as an actress, a Broadway star, and a writer. Furthermore, she received a nomination for Screen Actors Guild for her role.

Also, she starred as Sarah Braverman on the NBC TV drama ‘Parenthood’ from 2010 to 2015. Aside from television, she also made her appearance in films such as Bad Santa, The Pacifier, Evan Almighty, and more.

Lauren Graham’s estimated net worth is $15 million. Moreover, she makes a salary of $175,000 per episode. Besides, she earns money from the books she authored. She published her novel titled “Someday Someday, Maybe” in 2013. Graham is married to actor Peter Krause since 2010 and resides in Los Angeles.

Academy Award-winning actress Mary Steenburgen gained massive fame through her role as Lynda Dummar in the 1980 film ‘Melvin and Howard.’ The 66 years old actress starred in numerous movies and tv series. She moved to Manhattan in 1972 and enrolled at the Neighborhood Playhouse to study acting. For her role in the 1981 film Ragtime, he received a Golden Globe nomination.

The actress will be cast as the leading role, Maggie, in the 2020 series ‘Zoey’s Extraordinary Playlist.’ Her other notable role includes Back to Future Part III, The Help, and many more.

Mary has been married twice in her life. She was married to her first husband, fellow actor in 1980, and eventually divorced in 1990. Then Steenburgen married actor Ted Danson in October 1995. The pair has been married for more than two decades. In her career, Mary Steenburgen has accumulated a net worth of $20 million.

Michael Thomas Grant is a singer, actor, and visual artist. Grant tackling the role of Leif, on the NBC’s upcoming series ‘Zoey’s Extraordinary Playlist.’ He appeared along with Stephani Kyles, Alice Lee, and Kapil Talwalkar. Leif is a wide-eyed guy who does anything to go ahead.

Prior to Thomas appeared in the comedy series ‘Hipster Sweatshop’ and ‘Up North.’ The date of birth of Michael is not revealed on the internet. However, it seemed like he is in his twenties.

Although the net worth and salary of Grant are still under the radar, furthermore, he makes his money from his merchandise, where he sells apparel such as t-shirts.

Kapil Talwalkar is an Indian-American actor, musician, and occasional smartass. He will portray Tobin, a coder with “bro” energy who is computer smart but socially oblivious on NBC’s Zoey’s Extraordinary Playlist.

Kapil is the grandson of Indian actor Sharad Talwalker. He was born to Indian parents Umesh and Uma Talwalker and raised in the Bay Area. Further, Kapil has a sister named Mira, who is an actress.

Talwalker studied at the University of Southern California. This is his first appearance on the television. The 26 years old actor playing a lead role along with C.S. Lee of dexter fame in East West Players.

The Los Angeles native Andrew Leeds is an actor as well as a writer. He will cast as David in a recurring role opposite Jane Levy in NBC’s musical drama series Zoey’s Extraordinary Playlist. Leeds is a lawyer, Zoey’s older brother. He previously starred in the Broadway production’ Falsettos.’

Leeds’s other television credits include Cristela, Workaholics, Modern Family, Silicon alley, and Lucifer. Also, he recurs his role in the new series of Barry and also reprised his role of Agent Ken Stevenson on season three of Epix’s ‘Get Shorty.’

In addition to his acting, he wrote several series, including ‘Brenda Forever.’ However, the actor’s salary and net worth are yet to reveal.

American actress, singer, and dancer, Stephanie Noel Styles made her acting debut in the theater’s revival od ‘Kiss Me, Kate.’ Stephanie will portray Autumn, a barista at Zoey. She was born on 17th October 1991, making her age 28 and raised in Houston, Texas. Styles has a younger brother named John Henry.

By age four, Stephanie developed her interest in the theater after she watched ‘The Phantom of the Opera’ in NYC. She graduated from Episcopal High School and later enrolled at the University of Michigan and earned a BFA in musical theater in 2014.

She has been active in the film industry since 2002. To date, Stephanie appeared in many movies and television series such as The Submarine Kid, Booksmart, Glimpse, Bonding, and so on. The Zoey’s Extraordinary Playlist actress Styles’ net worth is believed to be around $1 million.

Zoey’s Extraordinary Playlist returns every Sunday on 9. Its premiere date was on 7th January, 2020. So, it’s the newest episode that will be airing tonight on 8th March. So make sure you do not miss out on today’s episode 5 titled ‘Zoey’s Extraordinary Adventure.’ We don’t know how many episodes the series will have, but we suggest you tune in as soon as possible from all the positive ratings on the show.