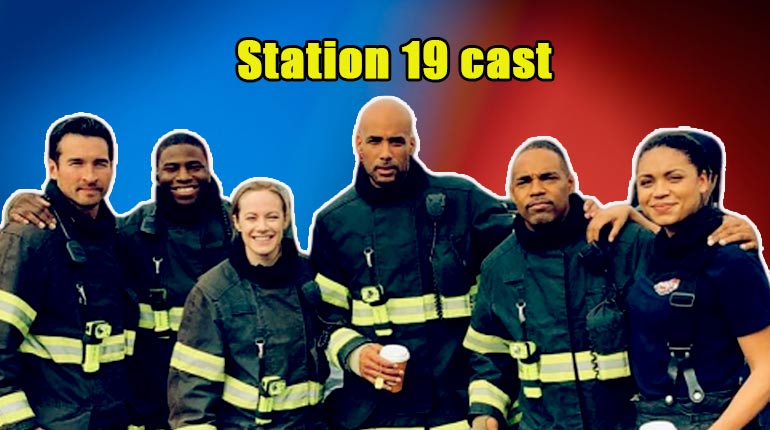 “Station 19” is the second spin-off series of Grey’s Anatomy that air on ABC in 2018. The series second season premiered in October 2018 and finished in the mid of 2019.

Fans of the show are early waiting to know about the show renewed. Here we are going to discuss the show’s cast member’s wiki-bio, net worth. Was the show canceled after season 2? Or will be back with more twist and turns below? Take a look.

Jaina appears as the lead role, Andrea “Andy” Herrera, a lieutenant at Station 19. In the series, she is the daughter of Captain Pruit Herera. At the end of season two, she fell in love with the new captain, Robert Sullivan.

Jaina Lee began her career as a professional salsa. The California Native studied two years at Amggie Studios before stepping into the acting. Back to date in 2009, she first auditioned and eventually cast on season two of VH1’s reality show ‘Scream Queens.’

After landing in a minor few projects, she starred as the female lead in Fox’s “Rosewood.” Her other works include The After, Shooter as well as appeared in the film ‘Girls Trip.’

The 33 years old actress Jaina is married to a writer, Brad Marques, whom she met during Rosewood. Jaina Lee Ortiz’s net worth stands at $300,000. Whatever her income is, this diva is living a lavish lifestyle with her husband.

Another main cast is Jason George, who plays as Benjamin Warren, aka Ben, a firefighter st Station 19. Ben is a former anesthesiologist-turned-surgical-resident at Grey Sloan Memorial Hospital who is married to Miranda Bailey in the series.

Throughout his career, he stars in nine series, more then fifty guest-starring as well as has some roles ion the big screen. Jason Winston George is widely recognized for his role as Michael Bourne in NBC’s daytime soap opera ‘Sunset Beach.’

George is a regular cast on Mistresses, Eli Stone, and Eve. His other projects include ‘With The Ring,’ ‘The Climb, ‘Barbershop,’ and many more. Further, Jason is a trained theatre actor and has done some stage work, including 12 Angry Men at the Pasadena Playhouse. He played the lead character in U.S poet laureate and Pulitzer in Rita Dove’s drama ‘The Darker Face of the Earth.’

Jason George’s net worth is said to be $1.5 million. He has been working in this industry for more than two decades and has summoned an impressive worth. George is married wife Vandana Khanna and has three children. When he’s not on set, he loves educating and engaging with other artists and young people.

Grey Damon is one of the main cast of ABC’s series Station 19. He plays as Jack Gibson, a Lieutenant at Station 19. Jack is energetic and fearless. Grey’s breakout television role came in 2010 after he was cast as Hastings Ruckle in critically acclaimed series ‘Friday Night Lights.’

He first appeared in the 2009 episode of ‘90210.’ He has a recurring role in series such as True Blood, Twisted, and The Secret Circle. He guest-starred in American Horror Story: Coven and Lincoln Heights.

In the film, Grey played a lead role in the 2017 movie ‘Sex Guaranteed’ along with Bella Dayne and Stephen Dorff. His other film roles include Oldboy, Percy Jackson: Sea of Monsters, and The Possession of Hannah Grace.

Apart from his career, Damon loves spending his time on other artistic endeavors like sculpting, photography, drawing, and music. Grey makes a decent amount of salary from the movies and series, which added to his net worth. Currently, he resides in Los Angeles.

Before landing the role of Victoria Hughes, a younger firefighter on ABC’s series ‘Station 19’, she played on Broadway in ‘Groundhog Day’ as the lead female, Rita.

Barett Doss was born on 20 March 1989 to parents Karl Doss and Kelly. She holds a bachelor’s degree in Arts from New York University Gallatin School of Individualized Study.

Her credentials include Comedy of Errors, The Real Thing, Jamaica. Moreover, she has recurring roles in Kick, Girls, Bull, Tie After Time, 30 Rock, and Person of Interest. This aspiring actress has a countable number of movies and series. Surely, she makes good bucks, but we are unknown about her net worth.

Talking about his relationship status, this actress is dating her boyfriend, Austin Durant. She often shares photos of the two on her Instagram.

Alberto Frezza stars as Seattle police officer Ryan Tanner on Station 19. In the series, he and Andy are longtime friends and dated each other when they were in high school. He previously starred as Garrett Skyes in the Freeform thriller ‘Dead of Summer.’

Born in Italy and raised in Ethiopia, Alberto has a dream to become a soccer player. But later, he developed his interest in acting and performed in many school projects. After graduating from high school in 2009, he moved to Los Angeles to study.

Among the earliest credits, he’s known for appearing in Charlie’s Angeles. He appeared in TV shows, including Criminal Minds, Grey’s Anatomy, and more.

America actor Jay Hayden is widely known for his role in ABC’s comedy-drama series ‘The Catch.’ He also starred on the CBS series “SEAL Team.” Currently, Jay stars as Travis Montgomery, a firefighter at Station 19.

Aside from television, he starred on a big screen. He appeared in ‘Wild Oats’ opposite Jessica Lange, Demi Moore, and Shirley MacLaine. He played a significant role as Kip in the 2008 film ‘The House Bunny’ along with Emma Stone.

Hayden was born in Northfield, Vermont, and now, he lives in Los Angles with his family. Station 19 actor Jay is happily married to actress Nikki Danielle Moore and is the father of two children. The net worth of Jay Hayden is not disclosed to the public yet.

Grammy Award-winning stage Okieriete is known for his acclaimed performance on Broadway. He is most known for starring as Hercules Mulligan and James Madison in the Broadway musical ‘Hamilton.’ Since his Broadway debut, he appeared in productions of Rocky the Musical and Cyrano de Bergerac.

Onaodowan has performed in many plays. He also has several screen credits, including Than for Sharing, Blue Bloods, The One You Marry and Ribbons, and Person to Person.

Further, he played as Afrika Bambaataa in Netflix’s ‘The Get Down.’ Now, he stars as a firefighter Dean Miller in Grey’s Anatomy spin-off ‘Station 19.’ Onaodowan has played in numerous Broadway and on-screen as well. He makes a good fortune from his acting that helps to increase his net worth. However, his net worth is not known.

Danielle Savre turned her passion into a professional career. Savre plays as Maya Bishop Seattle firefighter, like her sister, Stephanie. She is also Andy’s best friend. Danielle gained the attention of the people as a teenager in The WB’s drama ‘Summerland’ and also appeared in the NBC drama ‘Heroes.’

Savre has starred in several television shows like ‘The X-Files, Charmed, Too Close to Home, Bloodlines, Four Stars, and many more. Furthermore, she is a producer and produced several short moves such as Knock Knock that played at 30 festivals around the worldwide.

In addition to her career, she is making her mark in the fashion world. Danielle featured on the covers of many magazines, including Metropolitan Magazine, 25A, LaPalme, and VULKAN. The actress not only makes money from her acting but also as a producer and model.

Veteran actor Miguel Sandoval has appeared over 100 televisions and more than 60 movies in his career. Miguel started his acting career in the year 1975 after he joined as a mine in New Mexico.

He stars as Pruitt Herrera, a captain at Station 19 and a mentor to Andy and Jack. He has been acting professionally over four decades in theater, film, and television. Some of his movies and TV works include Repo Man, Jurassic Park, and Clear and Present Danger, Alias, Law & Order, ER, and Frasier.

Sandoval currently resides in Los Angeles, California, along with his wife Linda Sandoval and their two kids. Miguel’s networth and salary are still under review. We can assume that he has millions of net worth.

Australian-American actor Boris is the new Caption at ABC series ‘Station 19’ season 2. Before the Caption, Boris was the General at the Academy, where he Miller ad Gibson were training. In the series, Robert was once best friends with Chief Ripely, but their friendship faded after his wife died.

In season two, he moved to Montana, and his co-star Andy has a crush on him. Boris was named one of the ’50 Most Beautiful People in the World’ by People Magazine in 2002. He portrayed the role of David Taylor in the 2005 film ‘The Gospel.’ The 46 years old actor summons his wealth from the movies and televisions he played.

As of now, Boris’s net worth is $8 million. Besides acting, he makes extra worth from his business. He has his own clothing line called World of ALFA that brings the luxury of custom0made suits and shirts to market at affordable prices. Since 2005, Boris Kodjoe is married to an actress and model Nicole Ari Parker and has to children.

Born in Houston, Texas, Chandra Wilson began her career on-screen with a guest-staring role on ‘The Cosby Show’ in 1989. She is known for playing the role of Dr. Miranda Bailey in ABC hist drama series “Grey’s Anatomy. For her role, she nominated for the Best Supporting Actress four times.

She appears as Dr. Miranda, a Chief of Surgery at Grey Sloan Memorial Hospital in Grey’s Anatomy spin-off series ‘Station 19’. The Texas-born actress has never tied the knot. She is in a relationship with her partner for more than three decades and has three children named Sarina, Joylin, and Michael.

Chandra Wilson has summoned a net worth of $10 million. She is also an advocate and activist.

Amerian actress and model, Kelly Thiebaud, is well known for portraying the role of Dr. Britt Westbourne on ABC’s “General Hospital.” The actress made her debut role at the age of 17 in the film ‘Journey of Redemption.’

She had minor characters in TV series such as  Days of Our Lives, Criminal Minds, Castle, and movies like The Surrogate, Raze, and more. According to IMDB, the General Hospital actress will be playing a minor role in ABC’s series ‘Station 19’ of season 3, which is set to premiere in 2020.

Kelly was engaged with her co-star Brya Craig in June 2015. Unfortunately, they called off their engagement in 2016. Thiebaud has done countable roles in the movies and TV series. Kelly’s estimated net worth is around $1 million.

First of all, let you know that ABCs series ‘Station 19’ isn’t canceled yet. In May 2019, the series renewed for the third season. Some of the new casts also joined the show. On the other hand, Krista Vernoff was named the new showrunner o the spin-off series, replacing creator Stacy McKee.

Caption: Station 19 is renewed for the new season an the trailer s already released

When does Station 18 Season 3 Premiere?

Fans of the Station 19, the third season premiere date, has announced. As per TV Line, the Station 19 Season 3 ill return with new episodes on ABC on January 23rd, 2020, at 8 pm ET. On the same day, Grey’s Anatomy will return on ABC network at 9 pm ET.